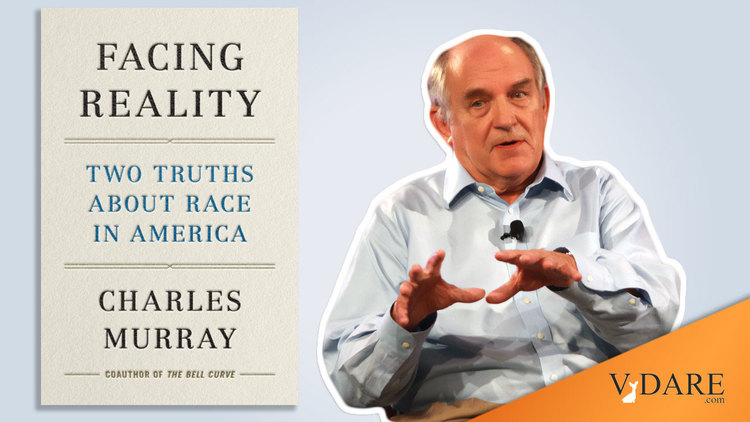 How Many Reviews Has Charles Murray's FACING REALITY Received In Its First Month Of Publication?

It’s now been a month since Charles Murray’s book Facing Reality: Two Truths About Race in America was published on June 15, 2021. It’s a quite short book so it’s not as if you have to expect reviewers to take weeks to read it. And it’s certainly topical and relevant regarding current news.

Which publications have reviewed it so far?

The book made the WSJ’s bestseller list, but it has not otherwise been mentioned on WSJ.com.

The Times reviews numerous books, both in its main pages and its Book Review section, sometimes even reviewing one book twice. But the NYT has not reviewed Facing Reality. From June 15, 2021, Charles Murray’s name has been mentioned only once on NYTimes.com, in a letter to the editor defending the banning of bad thinkers like Charles Murray from speaking on campus.

What the critics call an abandonment of A.C.L.U.’s principles reflects, in fact, a growing awareness of many within the A.C.L.U. that speech and equality are sometimes in conflict, and that context matters.

The point is illustrated by the recent controversy over attempts by college students to block Ann Coulter, Milo and Charles Murray from speaking on their campuses. While the administrators who ran the college bemoaned threats to academic freedom, and liberal critics charged the students with censorship of views they didn’t like, the students recognized what it meant to vulnerable students — whose lives on predominantly white, elite campuses were often a daily struggle — to be targeted by such unrestrained bigotry.

In contrast, Ibram X. Kendi, who for once doesn’t seem to have a new book to promote, has been mentioned nine times in the Times since Facing Reality was published.

The Atlantic: No review. Murray’s name has been mentioned once on TheAtlantic.com since June 15, 2021:

TUCKER CARLSON’S MANUFACTURED AMERICA
The Fox host has a new daytime show, and he’s using it to poison the meaning of patriotism.

On the June 16 episode of Tucker Carlson Today, Carlson hosted a man the Southern Poverty Law Center classifies as an extremist—ideology: white nationalism—on the basis of his use of “racist pseudoscience and misleading statistics to argue that social inequality is caused by the genetic inferiority of the Black and Latino communities, women and the poor.” Carlson spoke with Charles Murray for nearly an hour. He flattered. He fawned. “We are honored to have you,” Carlson told him.

Murray, who disputes the SPLC’s assessment of him, spent the episode issuing the kinds of claims that have made him infamous. At one point, he stated as fact that white people are more qualified for cognitively challenging professions than Black people are. Carlson did not push back on the assertion. He nodded appreciatively as Murray dismissed Fox News’s latest manufactured threat, critical race theory, as “a repudiation of the American creed.”

The New Yorker: No mention of Murray or his book.

The New York Review of Books has not mentioned Facing Reality, but it runs on a slower schedule.

NPR has not mentioned Murray or his book.

National Review has mentioned Murray three times, but has not yet mentioned his current book.

The Post gave Facing Reality a reasonable length review ten days after publication. The reviewer sought to make it sound boring and avoided mentioning almost all the interesting facts in it, but the Post deserves credit for engaging.

A well-worn argument about race, intelligence and violence

Theodore R. Johnson is a senior fellow at the Brennan Center for Justice and the author of “When the Stars Begin to Fall: Overcoming Racism and Renewing the Promise of America.”

… Charles Murray, co-author of the contentious 1994 book “The Bell Curve: Intelligence and Class Structure in American Life,” doesn’t so much enter the fray as he stakes out his well-trod turf. In his latest offering, “Facing Reality: Two Truths About Race in America,” Murray doubles down on the assertions from the most controversial chapters in “The Bell Curve” by declaring two things: Black Americans, as a group, have lower cognitive ability than White Americans, and Black Americans — again, as a group — are more criminally violent than other races and ethnicities. His argument is straightforward in its proclamation that to resolve society’s wicked problems, we must first accept that group differences in cognition and adverse social behaviors, not systemic racism, bear a significant share of the responsibility for racial socioeconomic disparities.

Coleman Hughes had Murray on his podcast.

Michael Barone wrote about it in his column in the Washington Examiner.