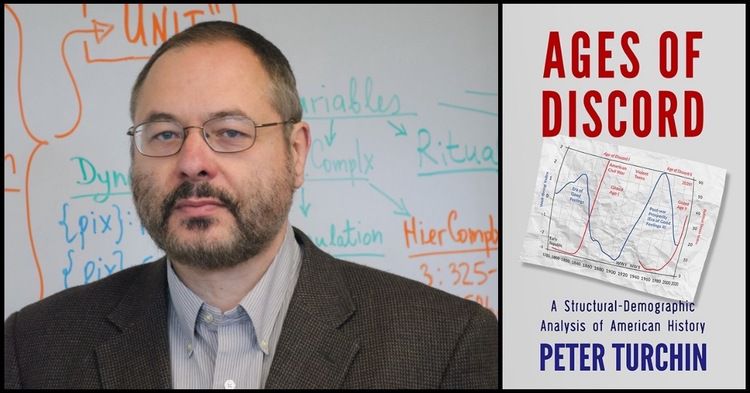 Peter Turchin And The Coming Crisis Of The 2020s 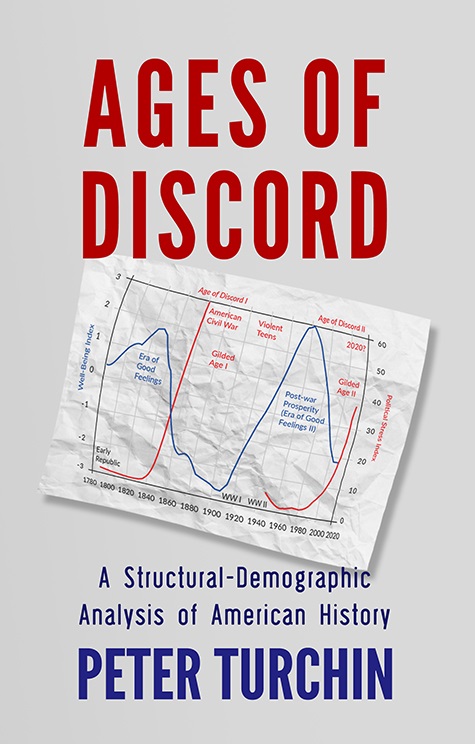 Increasingly, social science is dominated by Leftist ideologues who use the remaining respect that academia still has among the public to inculcate students and public alike with their equalitarian dogmas. But there are honorable exceptions. One of these: Peter Turchin, a Russian who is professor of Evolutionary Biology at the University of Connecticut. Turchin, who did PhD at Duke University, applies his “hard science” training to the Woke world of social science, aiming to make clear and testable predictions about the cycles through which civilizations go. According to Turchin, the West is headed for trouble in the 2020s.

Turchin, who keeps a blog about civilization cycles, recently presented his latest findings to the Centre for Complex Systems Studies in Utrecht, Holland, under the heading “A History of the Near Future: What History Tells Us About the Near Future.” [PDF]His conclusions are startling. Based on his detailed number-crunching about events, civilizations that are in decline—as is the USA is—always enter periods of extreme polarization. For the USA, the 2020s will be that period. It will be marred by years of political violence, and intense conflict. Worryingly, Turchin claims that the U.S. more polarized that it was on the eve of the Civil War [ See his Ages of Discord: A Structural-Demographic Analysis of American History].

Turchin argued in his Utrecht presentation that political instability in the USA and Western Europe in the 2020s will be of unparalleled severity, to the extent that it may well “undermine scientific progress.”

Turchin began his presentation by quoting himself from almost a decade ago already making this prediction, one which—in a world of Trump, Brexit and the rise of European “populism”—now seems extremely prescient. Spain has just become the latest country to give a right-wing populist party a substantial vote: the Vox party took 3rd place in the country’s November 10th general election. [ Eurosceptics rejoice as Vox becomes 3rd most powerful party in Spanish election ,RT, November 11, 2019]

“Qualitative historical analysis reveals that complex human societies are affected by recurrent—and predictable—waves of political instability” he wrote in a letter to the leading science journal, Nature, which he quoted at the beginning of his presentation [Political instability may be a contributor in the coming decade, February 4, 2010].

This, in essence, is “too many workers.” Turchin noted that when “the supply of labor exceeds its demand, the price of labor decreases, depressing the living standards for the majority of population, thus leading to popular immiseration [impoverishment] and growing mass-mobilization potential, but creating favorable economic conditions for the elites.”

In other words, as gradually occurred in the 1950s and the 1960s in Europe, the rich have grown richer on the back of cheap labor underpinned by mass immigration. This, however, has led to economic polarization and resentment, with the rich getting rich at a much faster rate than the poor. This means a well of angry, resentful people in the working and lower middle class.

Turchin argued that “favorable economic conjuncture for the elites results in increasing numbers of elites and elite aspirants, as well as runaway growth of elite consumption levels.” This means that many people who are higher up the hierarchy have to, in effect, become economically poor to maintain the veneer of “elite” status. Turchin added: “Elite overproduction results when elite numbers and appetites exceed the ability of the society to sustain them, leading to spiraling intra-elite competition and conflict.”

If you over-educate the populace, you have too many people who believe that in some way they have a right to rule—because when they were children, for people had a degree, that was kind of the case. So, if we assume that having a degree used to make you part of an “elite,” then we have “over-produced” this “elite”—over half of young people go into higher education in some Western countries. [More than half of young people are going to university for the first time, figures reveal, by Camilla Turner, Telegraph, September 26, 2019]

Thus there are far too many people qualified as lawyers, far too many college graduates, and thus very intense competition within and resentment between different sub-groups of “elite” people.

Many of them are not really “elite” other than on paper, but they regard “non-elite” jobs as beneath them. Think of all the baristas with Cultural Anthropology degrees, the wannabe attorneys working as civil servants or for charities; the numerous graduates doing The Office-type tedious jobs. This breeds hatred and conflict among the more educated.

This occurs when a “fiscal crisis,” of the kind Turchin claims we have, reduces the power of the government to control the police, the army and other enforcers. The state begins to lack “legitimacy,” meaning that the elites and the populace are less likely to defend its institutions. Thus Trump supporters regard hallowed newspapers as “Fake News.” Brexit supporters label senior judges [ British newspapers react to judges' Brexit ruling: 'Enemies of the people', Guardian, November 4, 2019] and even parliament itself [ Boris Johnson’s attempt to subvert democracy has failed, and he should resign, New Statesman, September 24, 2019] as the “Enemy of the People.”

The state will be rendered even more fragile if foreign governments support the insurgents within the elite—for example, Trump expressing his support for Brexiteers. And similar insurgencies in other countries spur emulation: Trump supporters could look to the Brexit vote and see that such victories over the Establishment were possible.

Turchin argues that these factors also existed in the 1920s and 1930s, resulting in a crisis and in war. The elites dealt with this by attempting to create a more equal society, by limiting the size of the work force, by regulating the economy, and by limiting imports. The result was that between about 1930 and 1970, real (inflation-adjusted) wages grew.

But once the elites forgot about the 1930s, and became focused on their own enrichment, wages started to plateau and fall, leading to crisis by the 1970s. Policies to, in essence, make everyone much wealthier were then instituted across the 1980s.

But these could only last for so long and, claims Turchin, real wages have effectively been in decline since about the year 2000. And as this has happened, the elites have got richer and larger. For example, the percentage of the USA population worth 1 million dollars (in 1995 dollars) has grown from 2.9% to 6.3% between 1983 and 2007. So there is growing economic polarization.

The “over-production of elites” leads to aspirant elites challenging the “established elites,” if necessary by violent means. The number of elite positions is limited—there are 50 state governors and 100 senators, no matter the population size—so this leads to political instability. In this regard, Turchin charts how the number of candidates for Congress—the number of elite aspirants—has increased over time, meaning more and more resentful people in the elite, who might be attracted to radical action to get their way. 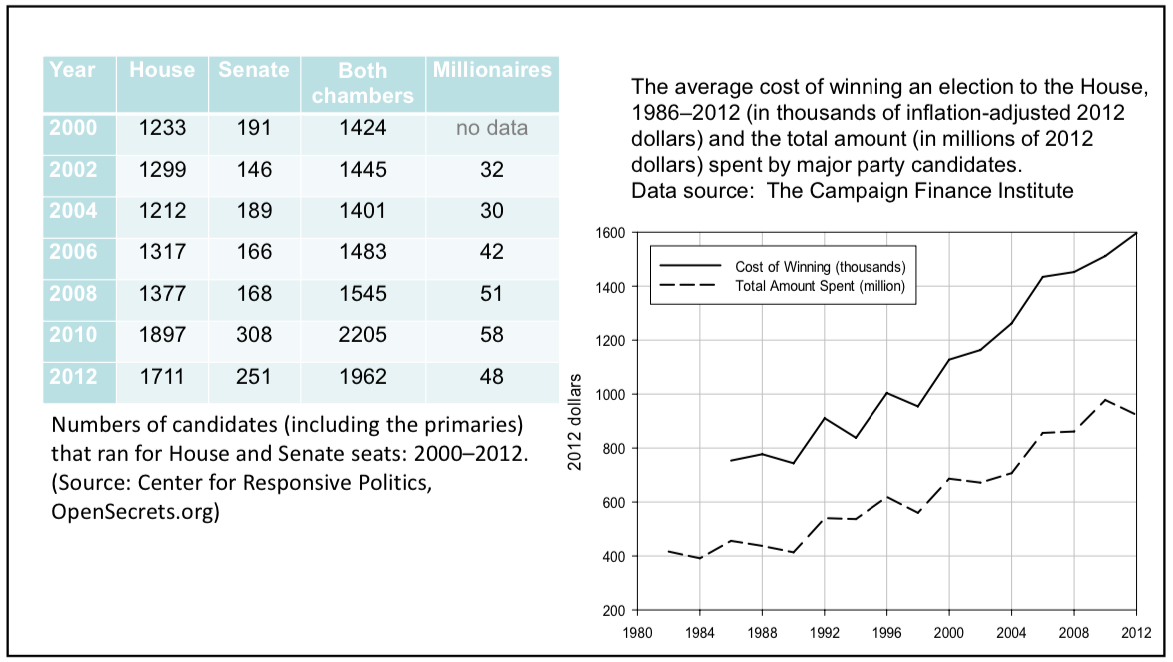 Turchin brings together a variety of “well-being indicators”—employment, real wages, health, family size—and finds that they all follow exactly the same pattern. They are low around 1900, which Turchin argues was a period of conflict and instability. They are very high by about 1960 and then start to rapidly fall. We would thus expect a crisis.

Serious crises seeming to manifest every 50 years or so. Turchin takes us into what he calls the “deep past”—back even to the history of Rome—to show that these cycles occur again and again in almost exactly the same way, for exactly the same reasons, even involving similar lengths of time, such as instability every 50 years [A History of the Near Future]. Fascinatingly, he shows—setting out the data in a graph—that there is a clear negative association between societal well-being and elite over-production between 1780 and 2010 in the USA. 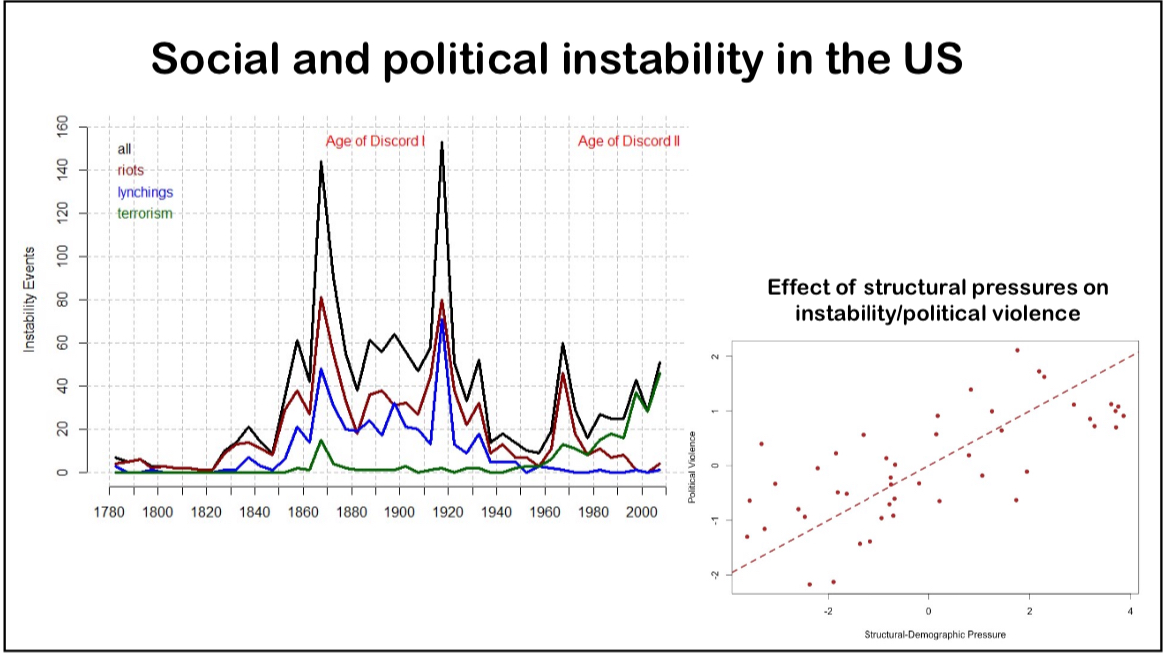 What will happen in the 2020s? Turchin argues that one possibility is mass mobilization leading to war, revolution, state collapse, a lethal pandemic, population collapse—and, eventually, the higher living standards that tend to go with a reduced population.

Turchin, however, is slightly more optimistic for this coming decade. He predicts that the West will undergo something more similar to the collapse of the Soviet Union, and thus avoid pandemics and a mass die-off.