Tim Wise is a well-known "anti-racist educator" who is paid outrageous sums of money to lecture college students on how evil white people are. His most famous book is "White Like Me: Reflections on Race from a Privileged Son." As you might have guessed though, Wise only identifies as white when it is financially advantageous. Occasionally, he also calls himself Jewish, albeit an "anti-Zionist Jew" [My Smackdown With Anti-White Crusader Tim Wise, by Mark Green, The Occidental Observer, March 7, 2010].

Wise is infamous for his habit of letting the mask slip and revealing his "anti-racist" education is really just overt hatred of whites as such. One of the most revealing rants was "An Open Letter to the White Right, On the Occasion of Your Recent, Successful Temper Tantrum" written after the Republican victories in the 2010 midterm elections, which featured him taunting "conservative old whites" who were supposedly "dying out" and unlike endangered animals, are not "worth saving" [Daily Kos, November 3, 2010].

But it's not just European-Americans Wise hates. He really, really hates Russians.

W/each new day I know why part of my family left shithole of imperial Russia. 100 years after last rev lets hope 4 another1 #ComeAtMeBroski

Seriously when your contribution to the world is Faberge eggs, autocracy and pogroms, no one should much care what you think.

Ian Tuttle of National Review is hardly a friend of the Alt Right [The Intellectual Rot At The Heart of the Beltway Right, American Renaissance, April 9, 2016]. But even he could hardly let slide the charge that Russia was somehow devoid of cultural accomplishments. 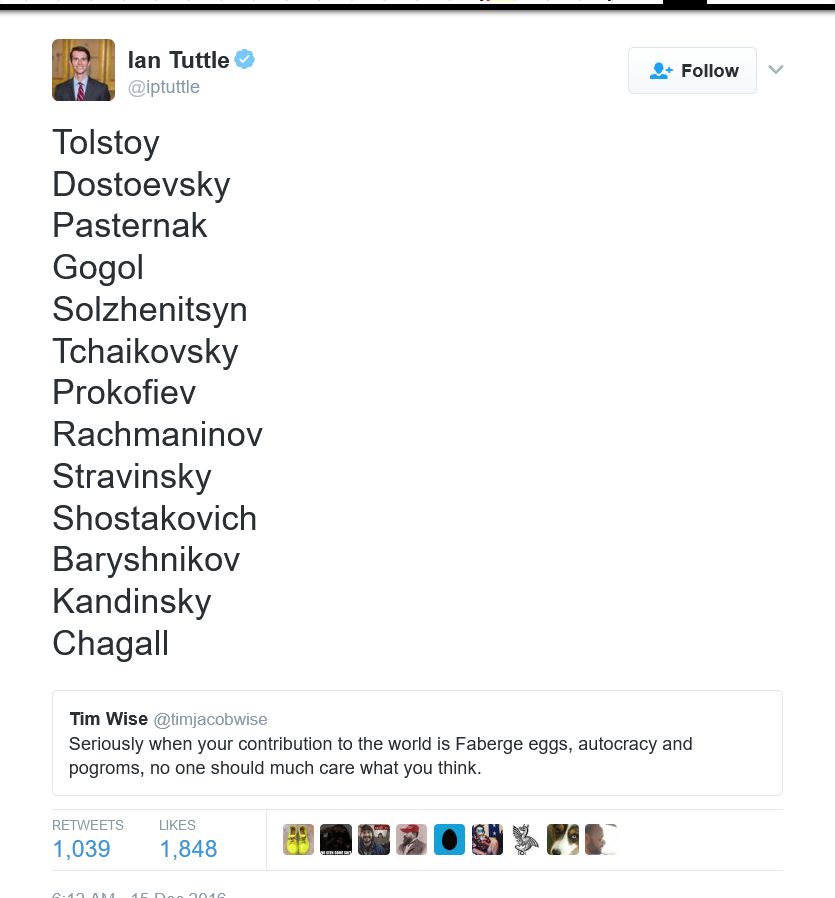 Of course, among the students Wise lectures, such names are probably unknown. After all, even Shakespeare is no longer suitable for education in supposedly elite American universities. But still, take a guess about what would happen to a man who earns a living speaking on college campuses if he made a blanket claim that an entire national culture had no accomplishments.

Much of the hatred and fear of Russia seems to have less to do with any policies of Vladimir Putin's government than with a kind of ethnic hatred against the Russian people. Louise Mensch, of the ostensibly center-right website Heat Street, infamously claimed last month that Russia was "joyless" and had "nothing." In contrast, she claimed, America had produced the late Leonard Cohen! (Cohen was Canadian. [Louise Mensch adds one more Twitter gaffe to her list, The Spectator, November 11, 2016] Still, one has to admire her persistence, as she's now moved on to openly calling for World War III.[Head of Heat St, Louise Mensch, Calls for Obama to Conduct Air Strikes Against Russia, Zero Hedge, December 12, 2016]

Hatred of the Russian people as such seems to be one of those forms of bigotry which is not just permitted, but openly celebrated and rewarded in the United States. Ultimately, it tells us more about the System which rules this country than it does about the supposed sins of Vladimir Putin.