Michelle Malkin: Who's Choking Off Your Children?

Stephanie M. is a work-at-home mother of three young daughters. On Friday, she received a text from her sixth grade daughter, Rylee. It was a selfie photo of the girl taken at Chinook Trail Middle School in Colorado Springs. The school is in District 20, which imposed a blanket indoor mask mandate a month ago for all preschool through 12th grade students. Rylee's face was overed not only by a black mask but also by three thick strips of blue painter's tape sealing the top of the mask over the bridge of her nose. 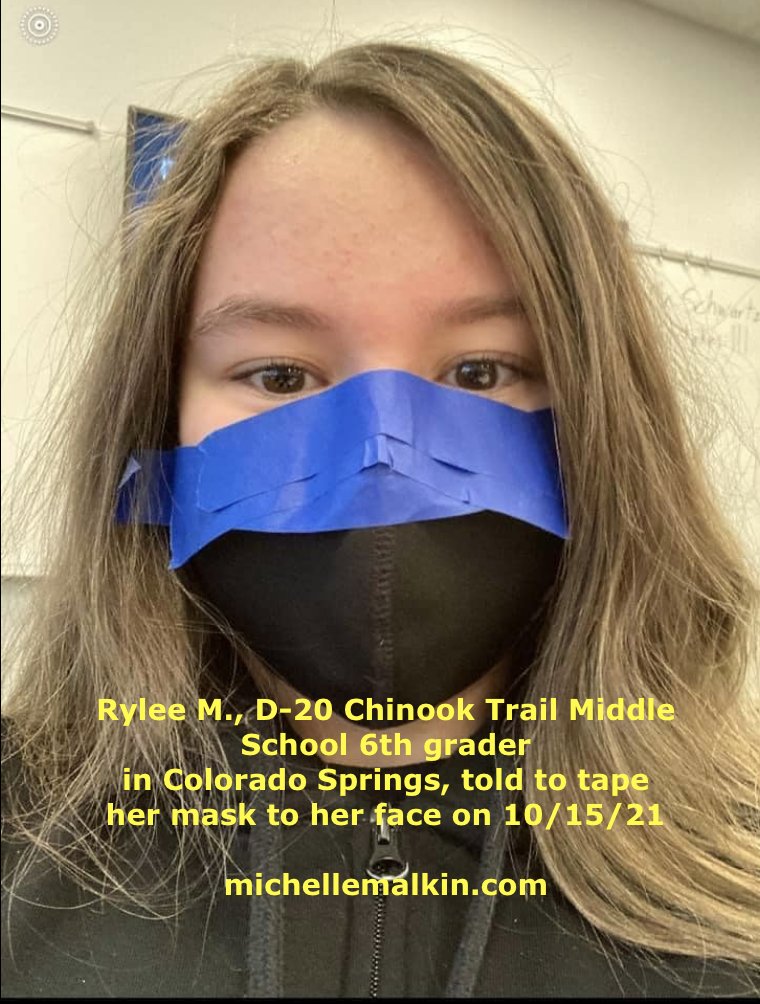 Rylee texted that "all teachers" in her learning pod had been toting around rolls of the painter's tape and began issuing "warnings" to students whose face coverings were deemed noncompliant. The message was clear: Shape up, tape up, or face disciplinary consequences. Sensing danger to her child, Stephanie rushed to the school to demand answers from school officials. In a taped conversation, dean Jennifer Richardson told the mom and daughter that the policy "is not an endorsed thing" and that students had "a choice" on whether to wear the tape or not.

Richardson downplayed the blatantly coercive intimidation by authority figures by asserting that "nobody told Rylee she had to put tape on her mask." But the sixth grader said she felt she had to when she was handed the tape. Stephanie, who told me she is not a confrontational person but was pushed to the edge by Richardson's rationalizations, immediately took her daughter out of the school.

"It's wrong, and I will be telling every single news channel. And I'm taking her out," Stephanie told the dean without a moment's hesitation. "That is child abuse." An unidentified male on the audio told her he agreed and apologized as Stephanie rebuked them on the way out:

"You are supposed to take care of the children."

Stephanie told me Monday that "it was a horrible decision to implement" the mask mandate in the first place without parental input. Compounding it with an oxygen-depleting and punitive tape policy adds even greater injury to accountability insult. Another mom of a Chinook Trail middle schooler, Tori Skeldum, told local news station Fox 21 that her sixth grader had also been subjected to the tape tyranny and that her child described the teachers "wearing the masking tape around their wrists like bracelets."

If that scenario reminds you of prison guards twirling around their keys or batons, you're not alone. Middle school is the new American Gitmo.

Are your children safe from the mask abusers? Informed Americans will remember that a similar incident took place in a Clark County, Nevada, elementary school last month, when a 9-year-old boy was humiliated in front of the classroom by a substitute teacher who strapped tape across his face when he forgot to pull his mask up after a water break. Whether by direct physical force or indirect inference, the outcome is the same: child abuse.

Be forewarned, parents, that if you blow the whistle, law enforcement may very well look the other way. Stephanie contacted the local police department, which she says blew her off. For what it's worth, the El Paso County Public Health Department told me on Tuesday: "EPCPH has not been consulted about allegedly taping masks to children. EPCPH would not recommend taping masks."

A district public relations official sent me a statement late Monday announcing an "internal investigation" that will involve "interviewing more than 100 students and staff members to better understand this situation." But who will be conducting the probe, and what will be done to ensure that parents and children are treated fairly and without the very same implicit threats and pressure imposed by the tape tyrants in the first place? Wisely, Stephanie has refused to participate in any interview of her daughter without a legal representative present.

Parental resistance is growing. Town of Monument Board of Trustees member Darcy Schoening, whose elected council represents hundreds of families with children in the school district, told me she had reached out to the D-20 superintendent Thomas Gregory in late September seeking an open, public discussion. To date: no response.

"Stifling the voices of thousands of constituents and students in order to give the appearance of 'safety' via masks is an insult to hardworking parents and innocent kids in our community," Schoening told me. "Studies have clearly demonstrated that masks are useless against viral spread, and many D-20 parents and students don't want to wear them. As Americans, that is their constitutional right. ... We will no longer sit idly by while such tyrants hurt our children. The people have had enough, and so have our kids."

Remember: All it takes is one. One becomes hundreds, thousands, millions and then a majority. Comply or defy. For our children's sake, the choice is clear: Defy, defy, defy!