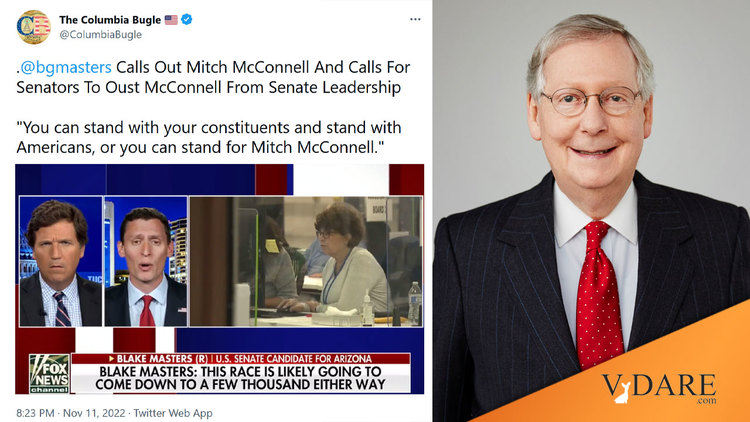 Senate Minority leader Mitch McConnell is in the news… again. Blake Masters, the losing GOP Senate nominee in Arizona, says McConnell should be deposed for shifting campaign spending from Arizona to Alaska, where—bizarrely—he used it to attack GOP Senate nominee Kelly Tshibaka on behalf of independent incumbent Lisa Murkowski, a Trump impeacher whom McConnell apparently regards as a personal ally.

.@bgmasters Calls Out Mitch McConnell And Calls For Senators To Oust McConnell From Senate Leadership

Masters, of course, is about the only Republican who dared raise the issue of affirmative action.

Quite probably, fear of being called racist is the reason. Masters faces a bevy of racism accusations for questioning diversity and Affirmative Action. Most Republicans would crumple and do everything in their power to avoid such attacks. Fortunately, candidates like Blake Masters ignore the attacks and focus on a strong message.

That’s one reason, by the way, that GOP Senate leader Mitch McConnell’s yanking $8 million of advertising in Arizona is so incandescently stupid [Mitch McConnell-backed GOP super PAC cancels nearly $10M in ad buys in Arizona, Alaska ahead of midterms, by Landon Mion, Fox News, August 27, 2022]. Just one Republican candidate has the courage to raise an obviously winning issue, but the bright bulbs in McConnell’s PAC respond by delaying ads in a race in which the candidate is just a few points behind in the polls. GOP strategery at its best!

Some, including former President Trump, appear to be continually surprised by the lurches to the racial left made by powerful Republican Senators, and most prominent among those lurchers is McConnell [Trump scolds Mitch McConnell as GOP Senate majority becomes unlikely after Democrats keep crucial Arizona seat, by Lawrence Richard, Fox News, November 11, 2022]. He’s been leader of the Senate GOP since... the Civil War? No, actually, since just after the expulsion of Trent Lott after an unfortunate 2002 birthday celebration he held for Strom Thurmond of South Carolina; and after the worthless term of his hapless “Bush-special-order” replacement William Frist.

Many of McConnell’s views are not publicized, and are often obscured by anodyne “pacify the bubba” comments. But they are most openly evident in the candidates he is willing to support with the massive campaign fund at his disposal or, presumably, the bills he blocks.

And, studying these, his views come out into full view.

For ol’ Mitch, some days it is support for caudillo-capitalist mass immigration of low-skill immigrants perfectly suited for lawn cutting at River Oaks Country Club in Houston and other similar venues—gotta keep those greens fees under control!

Other days, it is virtual abasement of white interests to black. As if any blacks other than any still in slavery in Kentucky could ever be coerced to vote Republican in any case. Like abandoning Blake Masters because he urges an end to Affirmative Action.

On another day in 2018 it was, it seems, quietly working behind the scenes to fund the trashing of immigration patriot Kris Kobach’s primary run for U.S. Senate from Kansas. See GOP Establishment Pours Millions Into Backstabbing Kris Kobach.

On other days, it is pushing for McSally and Loeffler against immigration patriots in the Republican primary in Georgia.

On another, more recent, incredible day, it is a trashing of current Republican candidates as exhibiting a lack of “candidate quality.”

Virtually all those candidates are immigration patriots or buck the BLM/Woke madness. Presumably McConnell’s ideal candidate is Mitt Romney.

And then of course sending enough money to Ukraine to defend its border—money more than sufficient to build a good defensive network (wall, if you will) on our southern border.

Unfortunately, in Mitch McConnell’s typical year, there are a lot of “other days.”

People seem surprised at this. How could a nominally conservative Republican, responsible in significant part for the current Supreme Court, be so inconsistent?

Weeeell… maybe the inconsistency is the small number of bones he throws to the dumb honkeys who keep him in office—namely us. Maybe the rest of the time he is completely consistent. With his own past, that is.

Let’s take a look at the “Mitch McConnell Story” as compellingly told by Wikipedia.

Mitch was born in Georgia in 1943, moved around the ol’ South, when his family finally settled in Kentucky. Now, a boy like that, you figure, wasn’t he gonna be a little more George Corley Wallace than otherwise?

Not quite. Though he probably was the only white male in the South not in the pay of the NAACP to do so, at 19 he hightailed it to Washington DC in 1963 to hear Martin Luther King give his famous speech on the Mall. Yes, that one.  Even Massachusetts liberals like John F Kennedy did not want MLK to hold this event, and, yet, good ol’ boy Mitch, son of the South, actually travelled 500 miles to hear it in person! Heck, there were lefty Democrats in DC that hibernated and probably hired armed guards for that week.

Then he went to work for probably the most liberal Republican ever to hold office apart from Thaddeus Stevens—John Sherman Cooper. Nothing morally wrong with that. Cooper was a tremendously upright man, of great intellect, with vast experience in foreign affairs, emissary to foreign lands on behalf of three Presidents. However, he was no conservative. As Senator from Kentucky, he voted for the Civil Rights Acts of 1958, 1964, and 1969 plus the Voting Rights Act of 1965—sort of the quadruple crown of Civil Rights, in those days.  Now, in fairness, after 70 years it is easy to criticize, but I am sure John Sherman Cooper thought, as many whites living in rich all-white areas did, that he was doing God’s, or at least the Late President Lincoln’s, work. Remember, they actually thought forced integration was good in those days, though none ever thought it would happen to them.

Then Mitch right went off and married a lovely young lady named Sherrill Redmon, so radical that today she is described as a feminist scholar at Smith College (since retired). Of course, who knows, perhaps at Smith, Smith being what it is, she is viewed as a “risen again” Enoch Powell. But I doubt it.

In fact, famed feminist Gloria Steinem, who has worked closely with Ms. Redmon on a woman’s oral history project since her divorce, helpfully pitched in, telling the New Yorker that

Redmon never talked about her ex-husband. She said: “Despite Sherrill’s devotion to recording all of women’s lives, she didn’t talk about the earlier part of her own… I can only imagine how painful it must be to marry and have children with a democratic Jekyll and see him turn into a corrupt and authoritarian Hyde. [Emphasis added]

Maybe Miss Steinem need not have worried so much. McConnell voted for extensions of the Voting Rights Act in 1986 and in 2006, just before becoming Majority Leader. A death warrant for his party.

At this point, we have almost a Saturday Night Live caricature of the rise of one more left-wing Democrat. Except this guy is supposed to be a Republican! It is only due to the magic power of our modern mass media that he is perceived as—in Steinem’s words—an “authoritarian Hyde.”

In any case, after three daughters, he divorced (or was divorced from) the professor and went on to marry another lovely lady, Elaine Chao (not “Chow,” Mr. Trump, shame on you) who just so happened to be a member of a mainland-descended Chinese millionaire shipping family with super close connections to you know who—yes, the CCCPC, the Central Committee of the Communist Party of China. Or, at least, so it must be assumed, since Elaine’s equally lovely sister now serves as president of the family company and is, or was, on the board of the China State Shipbuilding Company, which builds ships for, among other worthy customers, the People’s Liberation (aka Chinese) Navy,

According to investigative journalist Peter Schweizer:

it creates a circumstance where, if Mitch were to do something that Beijing didn’t like, [the Chinese government] could literally destroy the [Chao] business overnight.

However, on the good-news front, the family loved Mitch. In fact, they loved him so much that shortly after his ascension to the post of Majority Leader (just a coincidence) they gave him a gift of property the value of which has been estimated to be $5–25 million [Politico, June 12, 2009].

Now that’s a family we’d all like to be part of!

If Hollywood scripted a movie like this, with this guy becoming Republican Majority Leader, they’d laugh but say, “Hey, it’ll be a flop. No one’s gonna believe it.”

Well, in any case you gotta admit Mitch has thrown some bones to us peasants. He kept our own Felix Dzerzhinsky, Merrick Garland, off the Supreme Court. Good. But he didn’t keep him from being Attorney General. Not so good. So, I guess we traded a ban on abortion (that is, if you wanted one) for a police state. Hmmm...

Perhaps there will be other benefits. Speculative at this point.

Let’s be blunt. The takeaway is clear: Mitch McConnell his whole life has been a racial radical, fundamentally on the left, with instincts disastrous for his own people and his nation. An Eldridge Cleaver in drag with a tax-cut policy. Frankly, like so many other limousine liberals. Why are we surprised at what he does now?

Perhaps the GOP needs a counterintelligence arm that can weed people like McConnell out before they join the party. Of course, if it did, would there be any Republican Senators left?

And, anyway, the CIA supposedly had a counterintelligence unit in 1979 when they interviewed a relatively low-IQ New Jersey Irishman whose most recent presidential vote (by his own admission) was for Communist Party chairman Gus Hall. They hired him.

His name was John Brennan. Remember him?

With guys like “CCCPC Mitch” and “Red John” at the wheel, how can we lose?