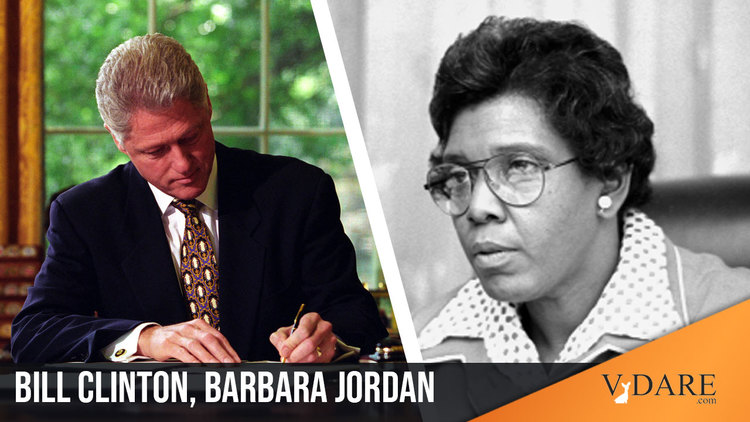 Joe Guzzardi (Substack here), a long-time VDARE.com contributor who ably documented the decline of California due to immigration, recently published an op-ed in the Dallas Morning News [Clinton’s Immigration Awakenings—Biden will not likely come to such a realization any time soon, October 12, 2022] (actually a repost of one of his Progressives For Immigration Reform columns) that I’m compelled to correct. Guzzardi claims that his fellow Democrat Bill Clinton was a sensible immigration moderate. And indeed Clinton is still making sensible noises (see below). But I worked for the Immigration Naturalization Service during his administrations and can state with certainty that, on Clinton’s watch, his immigration underlings did everything they could to weaken border enforcement.

I do understand Guzzardi’s optimism. Compared to the Biden Regime’s  Great Replacement, with 2.4 million illegal-alien apprehensions at the border last year, a million apprehensions under Clinton seems moderate [INS Statistical Yearbook, 1994]. Then again, apprehensions were half that as recently as 2018—and slightly less than half a million during 2020, when Trump was not only enforcing the border, with help from AMLO, but had actually declared a temporary immigration moratorium.

Every now and again, both during and after his two-term presidency, Bill Clinton espoused sound immigration thoughts that focused on the nation’s best interests. Most recently, without naming Joe Biden, Clinton took direct aim at the sitting president’s open border fiasco.

On a CNN podcast, in response to a question about economic migrants who are, in host Fareed Zakaria’s description, “gaming” the asylum system, Clinton replied that “there’s a limit” at which point open borders will cause “severe disruption.” Clinton added that the established immigration protocols, presumably a reference to the traditional agencies that assist incoming immigrants, function on the assumption that border conditions would “be more normal.”

Is the economy working for enough people? What can we do about America's broken refugee-asylum system?

Guzzardi observes that in a 1995 speech to Congress, Clinton said “it is wrong and ultimately self-defeating for a nation of immigrants to permit the kind of abuse of our immigration laws we have seen in recent years, and we must do more to stop it. [Address Before a Joint Session of the Congress on the State of the Union, January 24, 1995].

During his speech, Clinton mentioned Barbara Jordan, the former U.S. representative who chaired the U.S. Commission on Immigration Reform. The commission’s goal was to establish “credible, coherent immigrant and immigration policy.” The African American Democrat from Texas endorsed significant legal immigration reductions with an emphasis on high-skilled admissions, fewer refugees, more deportations and a chain migration overhaul that would limit sponsorship to nuclear family members. Jordan distilled her immigration vision in a sentence: “Those who should get in, get in; those who should be kept out, are kept out; and those who should not be here will be required to leave.”

However, Jordan died just months after releasing her report, after which a civil rights, Hispanic advocacy coalition opposed to Jordan’s immigration goals strong-armed Clinton into backing away. Had Jordan lived, her presence might have kept Clinton committed to her commonsense immigration reform rules.

Barbara Jordan was, objectively, far, far, far to the right of "white nationalist" Donald J. Trump on immigration. Had the Jordan Commission's recommendations been taken up, we probably would not have an immigration problem today. https://t.co/8PVkNd2ioT https://t.co/x0ONwnKTiq

But I have two problems with this rosy view of Clinton.

Some background: Having begun my INS career under George H.W. Bush, I served under Clinton’s Jewish Commissioner of the INS, Doris Meissner, and saw the mass fraud of the legalization program that continued well into the late 1990s. I was on the borders when the Clinton Regime sabotaged the very immigration control legislation that he had signed, the Illegal Immigration Reform and Immigration Responsibility Act of 1996 [IIRIRA].

I began my service in late 1991, less than a year before Clinton entered office. Commissioner Gene McNary, now 87 years old, signed my credentials.

Noting that Clinton was no moderate, by the way, is not a defense of Bush 41. Women and a homosexual mafia infested INS in the 1980s, probably because of the 1986 Simpson-Mazzoli Amnesty. They worked their way into management that was previously dominated by white and Hispanic managers with U.S. Border Patrol experience. They soon dominated management in the field, too. Indeed, under Clinton, nearly every manager was either a woman or a homosexual.

Both had a penchant for their own laxness aka Administrative Amnesty for illegal aliens. For the women, the reason was estrogen-driven emotion and ”compassion.” For the homosexuals, the reason was that millions of illegals were a target-rich environment. There was a lot of quid pro quo exploitation to guarantee approved applications.

At my duty station, a Port-of-Entry at an international airport, which provided the least opportunity for corruption, we had two Hispanics; one a woman; the other a homosexual who was arrested for, unsurprisingly, corruption. Others credibly accused or investigated were invariably non-white or women.

Administrative Amnesties did not start with Barack Hussein Obama. They started with Clinton, Meissner, and Janet “Send In The Waco Killers” Reno.

Most blatantly, Clinton sabotaged 1996’s IIRIRA, which was supposed to revolutionize immigration enforcement but didn’t.

Clinton’s first and most important act of sabotage: the failure to implement the law’s Expedited Removal provisions. Any arriving illegal alien, or any illegal alien here under two years, was supposed to be deported without appeal to the Executive Office for Immigration Review or the immigration or federal courts. Congress clearly decided to halt endless appeals through the executive office and the courts, which permitted illegal aliens to remain here for decades before they received a final order of deportation.

Expedited Removal could have significantly reduced the then-current illegal alien population and prohibited the growth of illegal immigration from 1996 onward. But the Clinton Administration effectively stopped ERs nationwide. Even the provisions that applied to arriving illegal aliens at Points of Entry were sabotaged because the Clintonistas delayed writing regulations for six months.

Immediately after the act passed, for instance, I confronted an illegal alien and told her that she would be immediately deported with a permanent record of said deportation that would prohibit lawful immigration in the future. Or she could withdraw her application for admission and return to her country without such a crippling record.

She withdrew her application. But my supervisor, under orders from Meissner, refused to approve my action because I threatened expedited removal to persuade to withdraw her application. My supervisor’s excuse: the Clinton Administration had not written regulations, so the law was effectively nullified.

But an act of Congress is not dependent on regulations written by the Executive Branch: a law is immediately implementable. But the “moderate” Clinton Administration didn’t see it that way.

In the end, expedited removals were never implemented nationwide—until Trump. And after Trump, Traitor Joe Biden stopped them. So, since 1996, Administrative Amnesties from the Clinton, Bush, Obama, and Biden Regimes have stopped immediate removals.

Clinton also sabotaged the Defense Of Marriage Act where it came to immigration. DOMA prohibited the federal government from recognizing homosexual “marriage,” but Clinton’s pro-homosexual regime ignored DOMA and effectively recognized those “marriages” among immigrants.

The INS office where I worked handled the case of an American man who went to Thailand and “married” a Thai man who pretended to be a woman. The Thai national claimed he had undergone a sex-change operation, now called “gender reassignment surgery,” which we never verified and in any event was irrelevant under DOMA. The Thai was ineligible for an immigrant visa as the “spouse” of an American. But my office did not immediately deport him when he arrived from Thailand, and instead deferred his inspection. Then it admitted him as an immigrant “spouse,” a CR-1 immigrant visa classification.

Bill Clinton talks a good game. He’s trying to make himself look moderate compared to the senile Traitor Joe. And maybe he is, as they say in Spanish, en su sueños—in his dreams—but he isn’t in the real world.

Guzzardi should adjust his view on POTUS 42 accordingly.

Federale’s opinions do not represent those of the Department of Homeland Security or the federal government, and are an exercise of rights protected by the 1st Amendment to the Constitution of the United States.