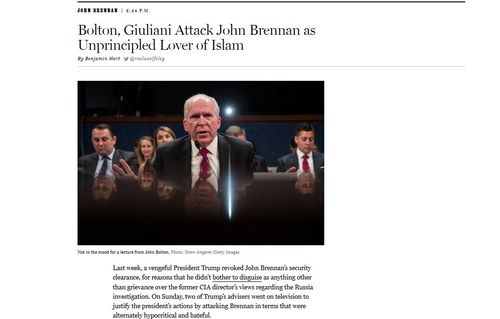 John Brennan’s Anti-American Past Is Remembered

Rudy Giuliani, attorney for President Trump, appeared on Fox News on Sunday to discuss the latest political whatnot, and when former CIA Chief John Brennan came up, Giuliani brought up Brennan’s admiration for Islam, a topic that has been missing from the current debate about his loss of access to America’s top secrets.

Obama sure did pick some winners!

RUDY GIULIANI: At the end of the day, how do you become CIA director if in the midst of the Cold War you voted for a communist? I mean only Obama would pick you. . .

Plus he claims to be a great lover of Islam, of the Islamic religion; he says the Hajj was one of the most beautiful things he ever saw.

I also questioned John Brennan’s allegiance, particularly in a 2014 blog, Is CIA Director Nominee John Brennan a Muslim?, that included a curious video:

Some of Brennan’s remarks are far beyond normal diplomatic-speak:

JOHN BRENNAN: For more than three decades, I have also had the tremendous fortune to travel the world, and as part of that experience, to learn about the goodness and beauty of Islam. . . . In Saudi Arabia, I saw how our Saudi partners fulfilled their duties as custodians of the two holy Mosques of Mecca and Medina. I marveled at the majesty of the Hajj, and the devotion of those who fulfill their duty as Muslims by making that pilgrimage. And in all my travels, the city I have come to love most is Al Quds — Jerusalem — where three great faiths come together.

This guy is a low-rent hack with delusions of importance who thinks he should have access to American security clearance in perpetuity — he must imagine he still resides in the Obama administration.

Brennan is not just a political enemy of President Trump; his loyalty to the US is questionable. In fact, Brennan was a security risk from the start and never should have had any position in US intelligence.