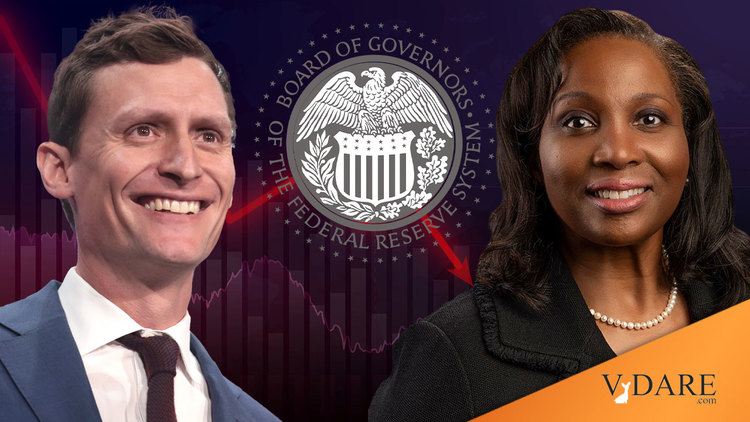 NYT To Blake Masters: Diversity Is No Laughing Matter

Earlier: Did Biden’s Fed Nominee Lisa Cook Mess Up Her Most Famous Paper?

Finally a compelling explanation for why our economy is doing so well https://t.co/Ub2CeiyjCs

As I pointed out last February when Biden appointed economist Lisa D. Cook to be the first black woman on the board of governors of the Federal Reserve, Dr. Cook’s best known academic paper is largely an embarrassingly confused botch. She probably means well, but she’s really not all that smart. (In contrast to Cook, Biden’s Supreme Court nominee Ketanji Brown Jackson struck me as probably at least at the judicial equivalent of the Mendoza Line in baseball—call it the Sotomayor Line.)

The New York Times news section is highly incensed by Masters’ joke about affirmative action. Diversity is too sacred to be a laughing matter.

The sarcastic barb from Mr. Masters, which was widely condemned, was in response to a report of increased diversity at the Federal Reserve.

He then dug in on Monday with a video in which he denounced “the Democrats’ diversity obsession” and described Vice President Kamala Harris as a beneficiary of an “affirmative action regime.”

“Finally a compelling explanation for why our economy is doing so well,” Mr. Masters wrote on Sunday in response to an Associated Press report that found there were, according to the news agency, “more female, Black and gay officials contributing to the central bank’s interest-rate decisions than at any time in its 109-year history.”

The post drew swift backlash, which Mr. Masters alluded to in a follow-up video Monday evening. “Well, this tweet made people mad,” he said, before adding that he didn’t care “if every single employee at the Fed is a Black lesbian as long as they’re hired for their competence” and that he had “never spoken to anyone who can say with a straight face that Kamala was somehow the most qualified candidate for that job.”

Ms. Harris is the first woman and the first Black person to serve as vice president and had extensive political experience—including as a United States senator and the attorney general of California—before Joseph R. Biden Jr. chose her as his running mate. …

Some fellow conservatives echoed the sentiment of Mr. Masters’s initial tweet and criticized the focus on diversity at the Fed at a time of high inflation. A number of Republican candidates and elected officials have also disparaged efforts to promote diversity and combat bigotry more broadly, and Republican primary voters have rewarded some nominees who espouse racist, sexist, homophobic and transphobic views.

Mr. Masters, a venture capitalist endorsed by former President Donald J. Trump, has been particularly outspoken. Among other things, he has promoted what experts in extremism describe as a sanitized version of the racist “great replacement” conspiracy theory—claiming that Democrats are trying to bring more immigrants into the country in order to dilute the political power of native-born citizens—and characterized the United States’ gun violence problem as “people in Chicago, St. Louis shooting each other—very often, you know, Black people, frankly.”