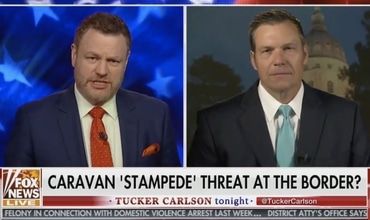 Mark Steyn talks with Kris Kobach about the possibility of a mass stampede of caravaners at the border, and the President's authority, under a law Congress passed in the '90s, to call up local police to help repel it.

From Steyn's own web page:

On Wednesday night I guest-hosted for Tucker on a busy evening, starting with the Tijuana caravan's plan for a "human stampede" at the southern border. Joining me to discuss the issue was Kansas Secretary of State Kris Kobach:

Steyn pointed out the "obvious contradiction" in highly-enforced laws governing Americans and border laws, which are often sparsely enforced at best.

Stating that the approaching caravans are a "general mix of illegal aliens," not a "mass of people who are fleeing oppression," Kobach said that most will "do what they were planning on anyway" and sneak across when they realize they are unlikely to get asylum.