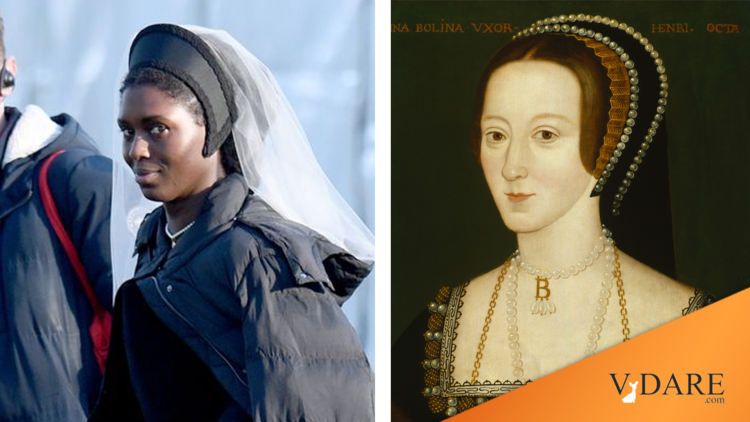 See, earlier: NO, William The Conqueror Did NOT Have A Black Advisor. SJWs Are Just Rewriting English History (Sound Familiar?) 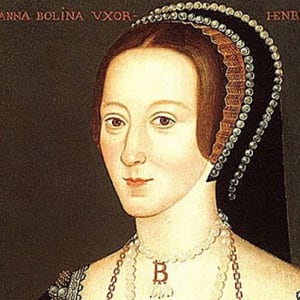 A British TV channel is producing a costume drama about Anne Boleyn, who was the second wife of King Henry VIII of England back in the 16th century. Henry's first wife, Catherine, had not been able to give him a male heir, so he had his marriage to her annulled in 1533 and married Anne. The issue of the annulment was what drove Henry to break with the Pope.

When Anne likewise failed to produce a male heir after three years of marriage, Henry had her charged with adultery and executed. The charges were most likely bogus, but that was the end of Anne; although, in a nice instance of generational revenge, her daughter later became Queen Elizabeth the First, a much better monarch than Henry.

Well, this TV channel is producing a drama about Anne, to be aired at some future date not specified. The actress playing Anne will be Jodie Turner-Smith, a full-blood negress [Jodie Turner-Smith plays Anne Boleyn in new Channel 5 drama that seeks to 'challenge conventions' by casting black actress as Henry VIII's executed wife and 'shine a feminist light' on her story Daily Mail, December 18, 2020]. And no, they're not making her put on white-face makeup.

This is of course historically preposterous. Anne Boleyn was a white English lady—we have contemporary portraits of her.

This is real slap in the face for actors from the limb different community.

Everybody knows that Anne Boleyn had six fingers on her right hand. https://t.co/jH4bdhttay

The producers of historical dramas—including this one, I'm guessing—go to great pains and expense to make everything look authentic: costumes, furnishings, weapons, transportation….We want the illusion of reality. No producer would have the Duke of Norfolk drive up to Henry VIII's hunting lodge in a Lamborghini and carrying an AR-15.

The classic Henry VIII TV biopic was an earlier British production: The Six Wives of Henry VIII, aired in 1971. Keith Mitchell played the part of Henry, and he played him with red hair. Why? Because Henry VIII had red hair, duh. That was fifty years ago, though, when we still had some common sense.

So what's the point of this gross, glaring anachronism—a negress playing Anne Boleyn? Let the producers tell us, quote from the news story:

"Producers Fable Pictures say the drama challenges all the conventions of who we think Anne Boleyn was and shines a feminist light on her story."

What they are actually challenging, of course, is historical truth.

So: Down with historical truth!

"Hold on there, Derb," I hear you cry. "Didn't you cover a similar story back in November, about a black actress playing Agent 007 in the new James Bond movie? And didn't you say you were fine with it?"

Yes and yes. However,

What I am not fine with is halfwit producers committing gross historical falsehoods in order to signal that they are faithful congregants of the Most Holy and Blessed Church of Negritude.

I am not fine with lies and hypocrisy.

Of course, the charge of hypocrisy there is presumptive. I'm presuming that these producers, in their private lives—in their residential and educational decisions—stay as far away from big concentrations of black people as everyone else does that can afford to.

If it can be proven to me that this is not the case, I shall make a modest donation to The United Negro College Fund.)

Previously on VDARE.com on blackwashing white characters, and other casting atrocities: