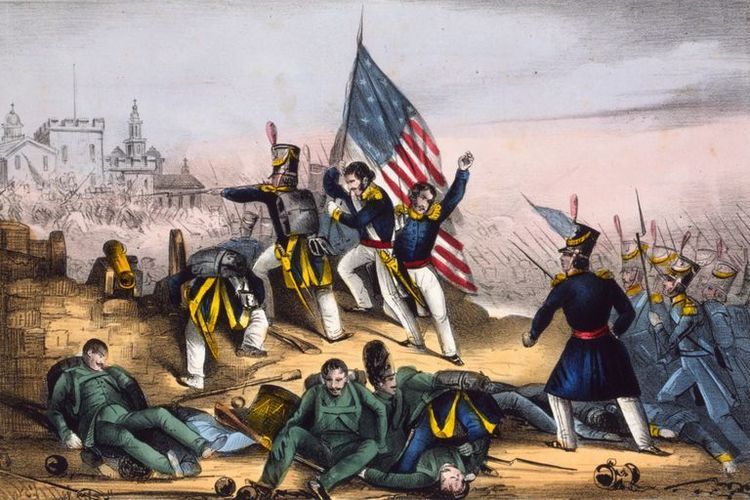 James K. Polk And Our Just War Against Mexico

As America debates whether to send tens of thousands more troops to Afghanistan, in the ninth year of a war for ends we cannot discern, a riveting new history recalls times when Americans fought for vital national interests.

A Country of Vast Designs: James K. Polk, the Mexican War, and the Conquest of the American Continent

is Robert Merry's brilliant biography and history of that time. Merry goes far toward righting the injustice done by historians who have denied this great man his place in the pantheon of presidents, because they believe "Jimmy Polk's War" to have been a war of aggression against a Third World people.

As Merry relates, the problem is not with "Young Hickory," the protégé of Andrew Jackson, but with historians who ever allow political correctness to blind them to true greatness.

The Mexican War was as just a war as we have ever fought.

In 1836 at San Jacinto, Sam Houston had won the independence of Texas with his defeat of Santa Anna, butcher of the Alamo and Goliad. In eight years, Mexico had not tried to recapture Texas. For eight years, Houston and Texas had sought admission to the Union.

In 1844, Polk, twice defeated for governor of Tennessee, was seeking the Democratic vice presidential nomination on a ticket with ex-President Martin Van Buren, Jackson's vice president.

But when the issue of annexation of Texas caught fire in the country, Van Buren opposed it, losing his patron Jackson. Polk rode the Texas issue to victory in Baltimore as the "dark horse" in the most dramatic convention in history. His opponent that November, the Whig Henry Clay, running a third time, was also fatally wrong on Texas.

Lame-duck president John Tyler, however, stole a march on Polk by annexing Texas by joint resolution of Congress.

But where was the southern border of Texas?

Santa Anna had signed Texas away to the Rio Grande. Mexico said the border was the Nueces River, far to the north. In dispute were thousands of square miles. To enforce America's claim, Polk sent Gen. Zachary Taylor to the Rio Grande.

A Mexican army arrived on the south bank, and an American patrol, north of the Rio Grande, was ambushed and cut to pieces by Mexican troops. When word reached Washington, Polk sent Congress a message: "The cup of forbearance" has "been exhausted."

And as ever in wartime, bold men rise to immortality.

Col. Stephen Kearny set out from Kansas with 1,500 troops, marched to Santa Fe, claimed New Mexico for the Union and, with 300 dragoons, rode on to Los Angeles, into a clash with Capt. John C. Fremont, son-in-law of Polk's mighty Senate ally, Thomas Hart Benton.

Zachary Taylor, "Old Rough and Ready," routed Santa Anna at Buena Vista in a victory that would make this Whig general Polk's successor as president. Bayoneted to death at Buena Vista had been the young hero Henry Clay Jr. His father had bitterly opposed the war.

To Gen. Winfield Scott, Polk gave command of an army that was to land at Veracruz and take the path of Cortez to the capital to dictate terms if Mexican diehards rejected a negotiated peace.

Leading an invasion force half the size of the defending army, Scott never lost a battle on his six-month march to Mexico City. The Duke of Wellington called Scott the world's "greatest living soldier" and said his campaign "was unsurpassed in military annals."

Riding with Scott's army was Polk's agent, Nicholas Trist, who would bring home a triumph rivaled only by the Louisiana Purchase. Trist was the chief clerk of the State Department under that devious secretary of state and future president James Buchanan, who ever had his eyes on the prize.

Given specific instructions by Polk on what he could offer Mexico, the cantankerous Trist ran afoul first of Scott, then of Polk, who ordered him recalled.

But Trist rode on to Mexico City, reconciled with Scott, seized the opportunity of a peace party in power, negotiated the Treaty of Guadalupe Hidalgo, came home and was sacked.

But under Trist's treaty, Mexico had agreed to the Rio Grande as the Texas border, ceded all of New Mexico, which included half a dozen future American states, and signed away California, for $15 million and forgiveness of Mexico's debts.

The renegade envoy had come home with half of Mexico. They ought to rename the State Department for this great American.

Some urged Polk to break his pledge and run again. He refused. He had done what he came to do: annex all of Texas, acquire California and settle the Oregon Territory dispute with Great Britain on terms favorable to the United States.

Polk went home to Tennessee and, in 100 days, was dead.

He lacked the character of Washington, the brilliance of Jefferson, the charisma of Jackson, but James K. Polk belongs with the immortals. None gave more or did more for America.

Bob Merry has made a major contribution to historical truth and written one splendid book.