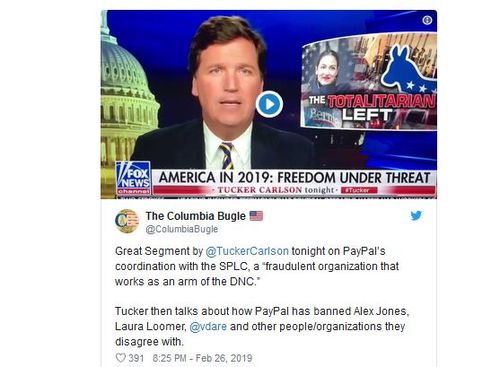 Great Segment by @TuckerCarlson tonight on PayPal’s coordination with the SPLC, a “fraudulent organization that works as an arm of the DNC.”

Tucker then talks about how PayPal has banned Alex Jones, Laura Loomer, @vdare and other people/organizations they disagree with. pic.twitter.com/Ha3Gi3diyf

If that clip is slightly incomplete, don't worry. Full details and transcript will be available from Media Matters shortly, paid for by George Soros's pre-tax dollars.

Tucker Carlson is must-watch cable news, he discusses issues that most in the media are too afraid to talk about.

See earlier Mark Steyn On Corporate Harassment Of VDARE.com: "I Can Think Of No Reason Why In A Free Society A Person Should Not Be Entitled To Hold Such Views." and Mark Steyn Defends VDARE.com Against PayPal On Tucker Carlson—Tech Companies Are Making Us Less Free.