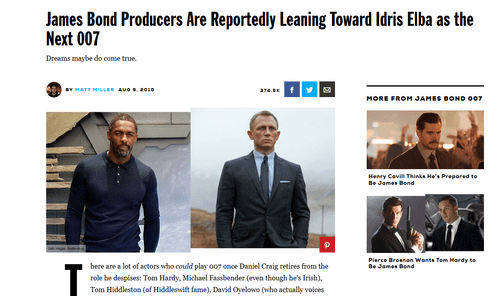 Well, it’s apparently going to happen. James Bond, as I warned some time ago, might well become black, according to London’s Daily Star:

MOVIE boss Barbara Broccoli has left the door open for Luther star Idris Elba to be the first black Bond.

The Hollywood chief, 58, told [black] director Antoine Fuqua “it is time” for the famous spy to be played by a black actor.

The 52-year-old chatted to Barbara about who will take over from Daniel Craig, 50, if he hangs up his gun after the next Bond film, due next year.

Idris, 45, is in the running to take on the coveted role.

Antoine revealed Barbara feels “it is time” for an ethnic minority actor to star as 007 and she is certain “it will happen eventually.”

He added: “Idris could do it if he was in shape. You need a guy with physically strong presence. Idris has that.”

According to Esquire’s breathless associate culture editor, who picked up the story from The Independent, Elba’s the only man who can depict 007.

There are a lot of actors who could play 007 once Daniel Craig retires from the role he despises: Tom Hardy, Michael Fassbender (even though he's Irish), Tom Hiddleston (of Hiddleswift fame), David Oyelowo (who actually voices the character in the audiobooks). Hell, even controversially-mustached human man Henry Cavill thinks he has what it takes.

[James Bond Producers Are Reportedly Leaning Toward Idris Elba As The Next 007, by Matt Miller, August 9, 2018]. 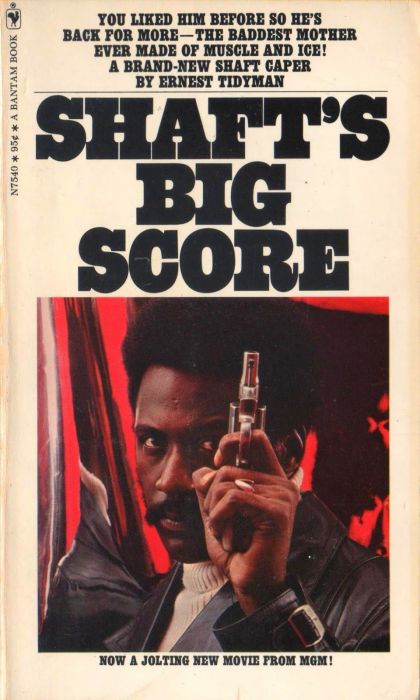 The subhead on Miller’s piece? “Dreams maybe do come true.”

Miller also opined that choosing Elba would be a “a good sign that Bond producers are at least leaning in the right direction.”

Oddly, Miller never explains why Elba should be the next Bond, or why choosing the black actor, most famous for his role in David Simon’s long Kinsley Gaffe, The Wire, is the “right direction.”

Nor does Broccoli explain why “it’s time” for a black Bond.

The day of a white James Bond must end.

Ok. Fine. When does a white guy get to play Shaft?