In John Derbyshire's recent review of Helen Macdonald’s H is for Hawk in  Chronicles magazine [Blessed Be the Passionate, May 7, 2015] he notes that Ms. Macdonald is a Leftist  Guardianista by upbringing, whose reflexive response to to an older gentleman saying  “Isn’t it a relief that there are things still like that, a real bit of Old England still left, despite all these immigrants coming in?” is to walk away

fuming at the old boy’s resentment at having seen his beloved country—which likely his father, and perhaps he himself, fought and suffered for—swept away by floods of unassimilable and often hostile aliens.  In the following paragraph the name of Hermann Göring pops up.  (Not for the first time: Godwin’s Law actually kicked in 63 pages earlier.)

Later, she goes to Stowe School, because T. H. White, an earlier falconry enthusiast taught there:

Later, as the author is inspecting plinths and statues in the landscaped gardens of a private school where White once taught, we get a shudder of ethnomasochism: “Here is the temple of British Worthies. Look at them all. Ugh.” Ugh yourself, lady. Those worthies built and maintained a nation that you Guardianistas are now giving away to barbarians.

Here's the The Temple of British Worthies at Stowe: 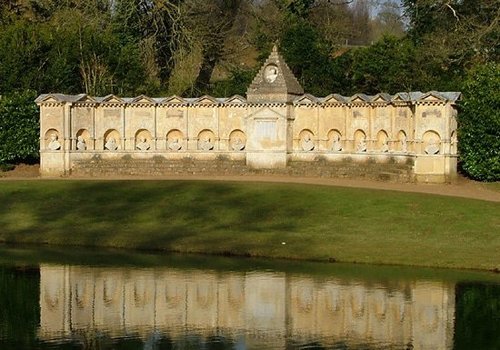 The thing  was put up in 1734, and the idea of "British Worthies" is based on the medieval idea of "Nine Worthies."And here they all are—a collection of dead white men, and one white woman, Elizabeth the First, who said "I know I have the body of a weak, feeble woman; but I have the heart and stomach of a king, and of a king of England too, and think foul scorn that Parma or Spain, or any prince of Europe, should dare to invade the borders of my realm."

There is not a Sacajawea or Crispus Attucks among them, because in 1734, they not only didn't do that, but there weren't any candidates. Britain had an overseas empire in those days, but it stayed overseas where it belonged. A relic of the past—no wonder Ms. Macdonald resents it.