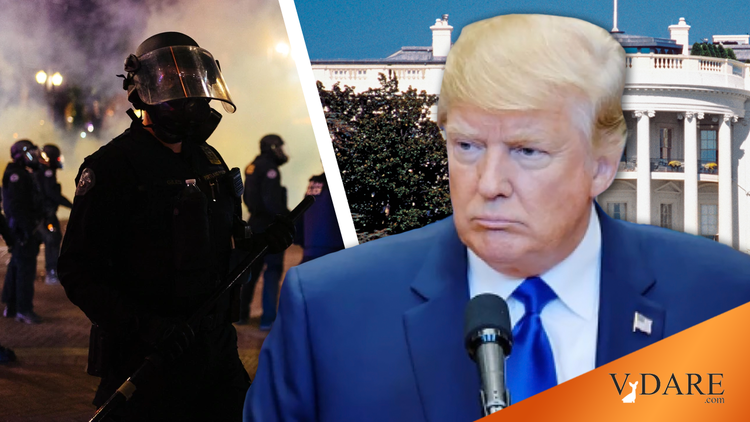 It’s Down To This—Self-Preservation For Trump And The Historic American Nation. It Probably Means Dumping Jared Kushner

President Donald J. Trump is still trailing former vice president Joe Biden in the polls (with the curiously unreported exception of the gap-closing bounce-back detected last week by Rasmussen) but his administration has finally shown signs of life by cracking down on Leftist rioting in Portland, Oregon. The furious reaction from local Democrat officials and their Journofa enablers shows that Trump is over the target [Portland Mayor To Trump Administration: We Want You To Leave, by David Cohen, Politico, July 19, 2020]. He may actually be on a path to victory if he backs up his Law And Order rhetoric with action—but that may require dumping First Son-In-Law Jared Kushner.

After weeks of resurrected Jacobin Terror, America is ready for Thermidor. Ironically for a man targeted by Never Trump Republicans under the “Lincoln Project” banner, President Trump’s action in Portland is the most Lincolnite thing he’s ever done [Portland mayor demands Trump remove federal agents from city, Associated Press, July 18, 2020]. Federal officers arrested some of those suspected of being behind the riots [Unidentified Federal Agents Are Detaining Protesters in Portland, by Adam Raymond and Chas Danner, Intelligencer, July 17, 2020]. Local Democrats, including Mayor Ted Wheeler and the Oregon state government, condemned the action [‘Like Adding Gasoline’: Oregon Officials Blast Trump Response To Portland Protests, by Matthew Schwartz, NPR, July 19, 2020]. The state government is even suing to stop it. Speaker Nancy Pelosi referred to federal law enforcement as “stormtroopers” [Pelosi Blasts Trump and ‘His Stormtroopers’ as Portland’s Mayor Tells Troops to Get Out, by Zen Read, Haaretz, July 19, 2020].

Of course this is craziness. These riots in Portland, Oregon have continued for almost two months. Local law enforcement is obviously unable, unwilling or simply banned from stopping them [Portland’s unrest continues for six straight weeks, by Danielle Wallace, Fox News, July 14, 2020]. Significantly, the New York Times is upset that federal officers didn’t have “riot control” training—conceding the point that these are riots [Federal agents deployed to Portland did not have training in riot control: NYT, by Marty Johnson and Lauren Vella, The Hill, July 18, 2020]. Simply put, this is sedition.

But the mayhem has been greeted by the Main Stream Media with the same indifference that it did to two elderly whites murdered by a black man while visiting their son’s grave. And Journofa doesn’t fear a repeat of the murder that ended the anarchist social experiment in Seattle, a case that is still “ongoing” with no arrests. Instead, they’re trying to whip the nation into hysteria about Trump’s “fascism,” instead reporting on the actual street violence that’s happening right now.

One could make the argument that Trump has been letting his foes reveal themselves by not taking action, at least until very recently. But his poll numbers have declined since the Black Lives Matter protests began. It’s hard to know how much of this is due to the coronavirus spread or Trump’s handling (or non-handling) of the riots. Either way, the root cause is the same. For a supposed authoritarian nationalist, Trump is far too hands-off.

Thus Trump has somehow failed to take advantage of a foreign pandemic, a scared population, and large-scale urban riots. Instead, he’s been too naïve, trusting to the wisdom of the stock market and the fair-mindedness of journalists.

The results aren’t surprising. The Washington Post, evidently quite seriously, posted a warning that Trump would govern as a “fascist” in his second term [Twelve signs Trump would try to run a fascist dictatorship in a second term, by Jonathan Greenberg, Washington Post, July 10, 2020]. As for the Donor Class, Joe Biden and the DNC outraised President Trump and the RNC for two straight months [Joe Biden tops Donald Trump in fundraising for second straight month, by Joey Garrison, USA Today, July 2, 2020]. While some Wall Street investors may want Trump to stay in office, they are more willing to back Biden, whom they assume is going to win [Biden’s Rise Spooks Wall Street. But its Donors Back Him Over Trump, by Shane Croucher, Newsweek, July 8, 2020].

The corporate tax cuts, regulatory rollbacks, and general deference to Big Tech displayed by the Trump Administration hasn’t given the White House any advantages. President Trump just held a major event at the White House where he attacked Joe Biden’s attempt to destroy “our very way of life,” but it was in the context of de-regulation [Remarks by President Trump on Rolling Back Regulations to Help All Americans, Donald J. Trump, White House, July 16, 2020]. Looking at the various firms where Trump Administration White House staff ultimately end up will no doubt prove enlightening about whose interests they were really serving when they were in office.

Is there hope? Yes. President Trump’s actions in Portland is one sign. And his apparently unscripted promise during the de-regulation event to talk about Joe Biden’s War On The Suburbs is another.

Still, these are fundamentally defensive actions. Opposing lawlessness and new diversity programs are the minimum of what we should expect. To actually change the election, President Trump needs to show his voters that they stand to gain with him in power.

He should be offering more direct help to Americans, with checks signed by him, not money funneled through a confusing, arbitrary process that rewards some groups at the expense of others.

Of course, it would be far better if we still had freedom of association, but that ship has apparently sailed. Now there need to be material costs for companies that purge those who don’t get on board with a far-Left political agenda, as is happening right now [Cisco fires employees for comments made during virtual diversity conference, by Ryan Fernandez, Silicon Valley Business Journal, July 17, 2020].

After all, fake hate crimes incite the same racial divisions and social tension that real ones do.

After some vacillation, Trump has imposed a temporary anti-unemployment immigration moratorium, although strangely he isn’t talking about it. But subsequently there have been mixed signals coming from the White House on the immigration issue, with President Trump reportedly mulling unilateral action to both impose a DACA Amnesty (something he’s always been squishy about) and tighten up immigration in other ways [Scoop: Trump’s license to skirt the law, by Alayna Treene and Stef Knight, Axios, July 19, 2020].

Plus incredibly, astonishingly, we still aren’t hearing anything about a remittance tax to pay for the Wall and immigration enforcement.

It’s tempting to blame all these failures on Jared Kushner. He appears to be culturally and even ideologically a New York liberal. (Why else would he even imagine that his jail-break bill would help Trump?) His brief has reportedly included Middle East peace, building a border wall, “criminal justice reform,” diplomatic relations with China, and the re-election campaign, all of which have been either failures or complete disasters [Inside Jared Kushner’s Unusual White House Role, by Brian Bennett, Time, January 16, 2020].

Jared Kushner was reportedly the one who told President Trump to fire FBI Director James Comey, thus sparking the Russia investigation and impeachment [‘Gung-ho’ Jared Kushner Pushed Donald Trump to Fire James Comey, Book Claims, by Chantal Da Silva, Time, March 21, 2019]. It was reportedly Kushner who told the president not to take aggressive action at the beginning of the pandemic, because the stock market might suffer, arguably the single most important misjudgment that could cost Trump re-election [Jared Kushner Reportedly Convinced Trump in March That Coronavirus Testing Was a Bad Idea, by Luke Darby, GQ, May 14, 2020].

Trump is responsible for staffing and the buck stops with him. We can only hope his instinct for personal political survival will allow him to see what everyone else already has.

Of course, patriots also shouldn’t automatically assume our cause is President Trump’s. Whether we should decide “worse is better” in this case, or settle for “the lesser of two evils,” is beyond the scope of today’s column. I’d personally like to see the GOP collapse and something new rise in its place. But I just don’t know if that’s even possible. I’m not even sure if it’s possible, or even desirable, for the country to remain in one piece.

What I do know with absolute certainty is that the main argument for Trump now is fear of what Democrats will do once in power.

Unlike felons, Historically Black Colleges, and Israel, American patriots haven’t seen much from President Trump. It was hope that drove Trump’s voters in 2016. Maybe fear of Biden and his Leftist handlers will work in 2020.

Ideally, however, President Trump needs to give his supporters something to work for rather than something to rally against if he’s serious about staying in the White House.

But I believe that process can only start if Jared Kushner is no longer running the campaign.