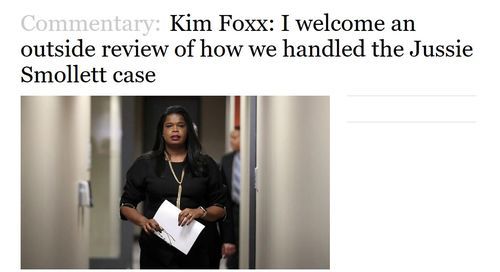 Kim Foxx: I Let Jussie Walk Not Just For Reasons, But For A Variety Of Reasons, Which, Sadly, I'm Not At Liberty To Tell You

An oped in the Chicago Tribune by the State’s Attorney Kim Foxx:

Commentary: Kim Foxx: I welcome an outside review of how we handled the Jussie Smollett case

Let’s talk about the Jussie Smollett case. Let’s talk about his alleged actions, the decision about how best to prosecute and resolve the case, and the implications for our Chicagoland community.

The real victims of this hate hoax by a black gay Jew are all the other black gay Jews who are victims of real hate crimes every hour of every day. But Jussie’s action did not cause harm to members of the classes of humans falsely charged. That’s just your White Fragility talking.

So, why isn’t Smollett in prison or at least on trial? There are two different answers to this, both equally important.

First, the law. There were specific aspects of the evidence and testimony presented to the office that would have made securing a conviction against Smollett uncertain.

Oh, okay, not just “for reasons” but “for a variety of reasons”!

In the interest of full transparency, I would prefer these records be made public. However, in this case, Illinois law allows defendants in certain circumstances to request that public records remain sealed. Smollett chose to pursue that avenue, and so my office is barred from releasing those records without his approval.

Another key factor is that the crime here was a Class 4 felony, the least serious category, which also covers things like falsely pulling a fire alarm in school and “draft card mutilation.” These felonies are routinely resolved, particularly in cases involving suspects with no prior criminal record, long before a case ever nears a courtroom and often without either jail time or monetary penalties.

… But more important than the dispassionate legal justification, there was another reason that I believe our decision not to prosecute the case was the right one. …

I was elected on a promise to rethink the justice system, to keep people out of prison who do not pose a danger to the community. I promised to spend my office’s finite resources on the most serious crimes in order to create communities that are both safer and fairer.

It was an incredibly serious crime, as all those tweets by Democratic Presidential candidates prove, as long as it was white men trying to lynch poor Jussie during the Polar Vortex. But as soon as it became Jussie trying to defame the white race and to frame two random white men with a crime that never happened, well, boys will be boys, you can’t go around prosecuting every 13-year-old’s little prank. Sure, he invested $3,500 in his elaborate hoax, but when did blood libels ever hurt anyone? I mean, when did blood libels ever hurt anyone who didn’t have it coming due to History Reasons?

Since taking office, I’ve sought to employ alternative prosecutions, diversions, alternate outcomes and other forms of smart justice, and it has been working — violent crime in Chicago is down overall. In addition to the benefits of smart justice on recidivism and keeping families together, it also creates bandwidth for my office to dedicate more resources to combating not only truly violent crimes but also the opioid crisis, holding big banks accountable for their actions,

You see, that’s a violent crime because it’s Economic Violence.

and other critical work. …

As a public figure, Smollett’s alleged unstable actions have probably caused him more harm than any court-ordered penance could.

None of that, though, should detract from two facts that must be able to coexist: First, falsely reporting a hate crime is a dangerous and unlawful act, and Smollett was not exonerated of that in this case. Second, our criminal justice system is at its best when jails are used to protect us from the people we rightly fear, while alternative outcomes are reserved for the people who make us angry but need to learn the error of their ways without seeing their lives irrevocably destroyed.