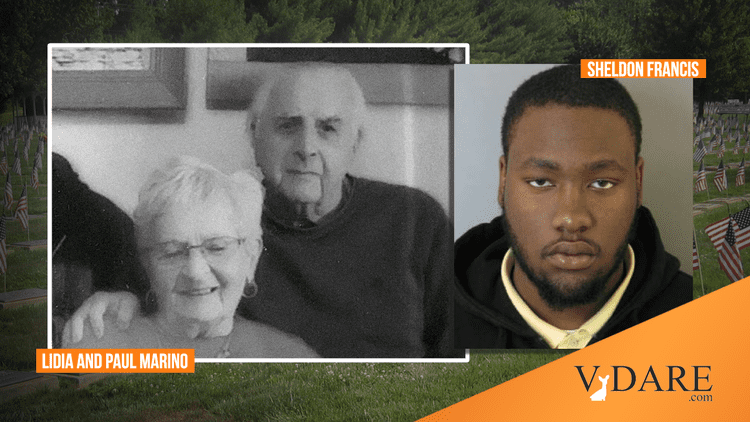 Murders Of Paul And Lidia Marino By Black Gunman: Down the Memoryhole

Why did Sheldon C. Francis murder octogenarians Paul and Lidia Marino while they were visiting their son’s grave at a veteran’s cemetery in Delaware on May 8, 2020?

Did it have anything to do with the vastly publicized arrest of two white men the day before in the death of jogger/prowler Ahmaud Arbery after he grabbed the man’s gun?

Ten weeks later, nobody seems to know or even care about the motives of Francis, who was subsequently killed in a spectacular firefight with police. Did he act out of media-motivated racial revenge? As I asked on May 13:

Imagine that the circumstances were reversed and if on Friday a young white man had hunted down an elderly black couple visiting their son’s grave at a veterans’ cemetery.

The national media would be in full cry over this racist atrocity. President Trump would attend the funeral. The prestige press would demand that whatever web sources of information and opinion the gunman had followed should be, First Amendment or not, permanently exterminated.

But what happens when it’s The Megaphone itself that may have egged on the killer? For example, a search of the New York Times archives finds 104 articles mentioning the name of Ahmaud Arbery so far just in the month of May. …

If your Party controls the media, you can have all these unfortunate events memory-holed, so that you never get confronted with tiresome questions about just how much blood you have on your hands in the murders of elders visiting their son’s grave.

But controlling the media means that you also don’t learn from your mistakes.