"Protest" or "Riot"? Establishment Appears Increasingly Demented as It Tries to Mold the Narrative

It’s very important to the manipulators of The Narrative to use the appropriate words for events. For example, are the events unfolding in many cities across America at present “protests” or “riots”? That’s because American discourse has been progressively dumbed down toward a childish emphasis on deciding ahead of time who are the Good Guys and who are the Bad Guys. If the rioters are the Good Guys, they can’t be engaged in a “riot.” They just can’t. So they have to be carrying out a “protest.”

If I do a text search on the homepage of NYTimes.com for “protest,” I get nine hits. But when I do a test search for “riot” I get zero. Also zilch for “loot.”

At LATimes.com, six “protest,” no “riot,” and one “loot,” in the headline of this editorial by the Los Angeles Times Editorial Board: 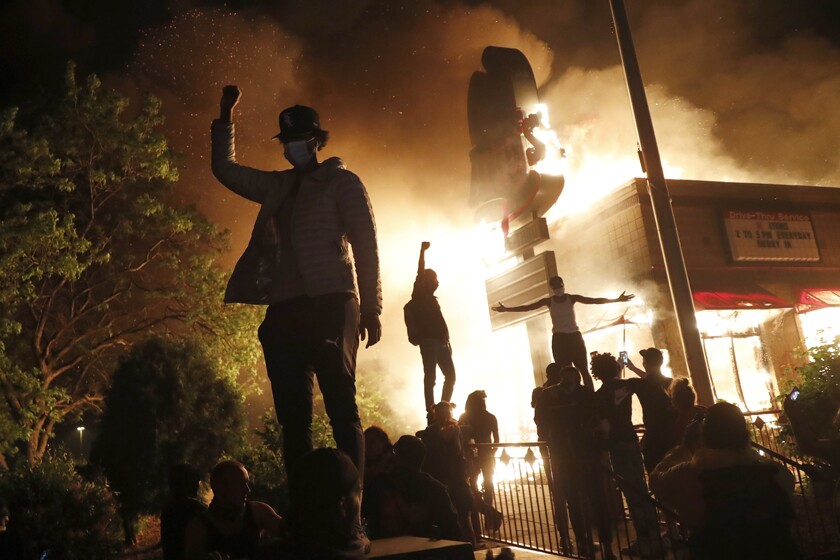 There is anger on the streets in Minneapolis. And Los Angeles. And Columbus and Phoenix and Denver. It is deserved anger fed by the death of George Floyd, yet another unarmed black man killed as police arrested him.

Another. That’s the key word.

The mature and reasoned response is, of course, to explore what went wrong Monday on that Minneapolis street. Why did the police officers responsible for this unnecessary use of force still have badges, given their history of previous complaints? Why did it take so long for authorities to arrest the officer filmed pinning Floyd to the ground with a knee on his neck? What can Minneapolis — or Los Angeles, or Ferguson, or New York City — do to improve relations between police and the communities they serve? Cue up the commission, bring in the experts, hold some hearings, let people vent for a bit and then, by golly, we’ll have change.

That’s the lie we tell ourselves with depressing regularity. The solutions we keep trotting out fail to address the real fault lines here. Police now often carry body cameras, undergo implicit bias training and embrace community policing strategies aimed at bridging the divide. We keep looking for the technology or training that can be bought and implemented to end police brutality, and there have been some improvements, particularly in cities where police departments have restricted use of force in making arrests. But progress is not victory.

And this is not a technology problem, or something that can be ended with some policy tinkering. It is a function of deep structural racism that we as a nation have proved to be incapable of exorcising.

Los Angeles burned in 1965 when a white California Highway Patrol officer pulled over a black motorist, starting a cascade of events that quickly released a community’s pent-up rage and frustration over police conduct. Detroit burned in 1967 after a police raid on an after-hours bar filled with African Americans similarly breached a dam holding back years of anger over police violence against black neighborhoods. Newark, N.J., burned that year too, a single arrest and beating of a black man unleashing years of community frustration. These upheavals reflected years of rising anger in African American neighborhoods over the conditions of their existence and the excesses of police departments that, as the motto says, were there to protect and to serve. Then came the 1991 police beating of Rodney King, all the proof Los Angeles needed that history does repeat itself.

And no, police violence does not justify the rampages that erupted in Minneapolis. But as the Rev. Martin Luther King Jr. pointed out more than a half-century ago, “a riot is the language of the unheard.” To focus on the damage and looting misses the point. Were it not for the killing of Floyd, and the history of police behavior, there would have been no protests.

According to one analysis, unarmed black Americans today are five times more likely to be killed by police than unarmed white Americans. We can blame some of that on over-policing, itself often an expression of unacknowledged bias. But the threat comes not just from people with badges. It crops up in daily life in the most mundane ways: A white woman calling New York City police on a black man out birdwatching who had the gall to ask her to leash her dog. A white man — again in Minneapolis — calling security when four black men rejected his demand for identification proving that they had permission to use the gym in a building where they all worked. A Starbucks manager calling police in Philadelphia to arrest two black men who were waiting to meet a potential business partner.

That’s not the police sparking a racially framed encounter; it is white Americans surfacing the structural racism that, in its worst excesses, ends with the deaths of black Americans. Trayvon Martin. Ahmaud Arbery. Their killings did not involve police.

Yet it is in the intersection of structural racism and the police — the people whom we empower and arm to enforce laws — where such violence resonates with such ferocity. Floyd’s death, as Minneapolis City Councilwoman Andrea Jenkins said, “was a symbol for a knee on the neck of black America.” That knee has been there for an unconscionably long time. Too long.

This is basically a call for criminal violence.

Of course, the word “mob” doesn’t appear on any of the homepages of the Big 4 newspapers.

And an Academy Award winner offers this:

Good citizens burning down the evil police precinct in MN after all police were out & safe. All police should go home. No violence please. Police HQ must be demolished by the city tomorrow as a show of contrition to black America. Rebuild PD with decent kind ppl aka ppl of color