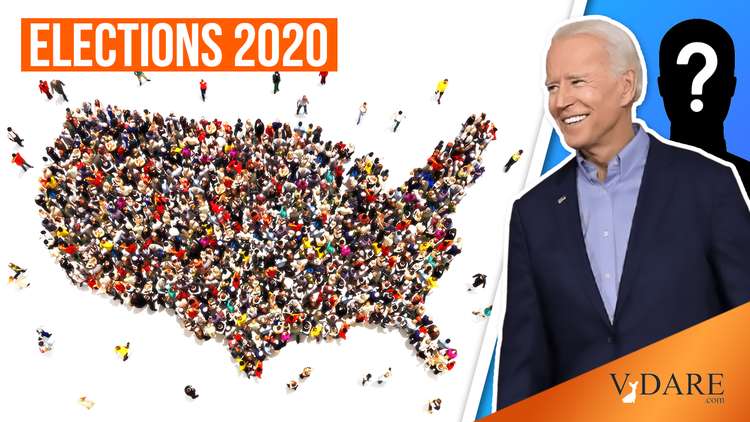 So we are told. Yet, even before America becomes a majority-minority nation, 25 years from now, recent changes in the composition of the country are going to impact both parties in 2020.

According to Brookings Institution demographer William Frey, between 2010 and 2020, while America's population grew by 20 million, our white population fell for the first time since the 1790 census.

White Americans fell as a share of the population in all 50 states, in 358 of 364 metropolitan areas, in 3,012 of 3,141 counties. During that same decade, our Black population grew by 3 million, our Asian population by 4 million and our Hispanic population by 10 million.

What's the significance of those numbers? In presidential elections, Hispanics and Asians vote 70% Democratic and African Americans vote 90%.

For children under 16, the white share has fallen to less than half.

Bottom line: The pool of Democratic voters is growing inexorably while the largest pool of potential GOP voters is aging, stagnating and shrinking.

For the GOP, this is an existential crisis. If demography is destiny, and the party does not either increase its share of the white vote or attract millions more Black, Asian or Hispanic voters, then its national fate and future are sealed.

All one need do is look to California. There, Democrats occupy every statewide office and two-thirds of both houses of the legislature. Both senators are Democrats as are 45 of the 52 members of the U.S. House.

Nor are Democrats unaware of the opportunity demography offers.

As persons of color in America—Asians, Blacks, Hispanics, Native Americans and people of mixed race—grow in number, the Democrats' job is a simple one.

Get more people of color registered and voting.

So, today, Democrats are pushing for amnesty and a path to citizenship not only for the DACA "Dreamers" but also the 11 million to 22 million other immigrants here illegally. Democrats may be found enlarging the electorate anywhere they can, even if it means allowing convicted felons and prison inmates to vote.

If Democrats capture the White House and Senate, the "Muslim ban" on immigration is history, and America's doors will be opened anew.

But Joe Biden and his generation of Democrats have their own problem.

Even as people of color make up a growing share of the nation, around 40%, they are an even larger, and still growing, share of the Democratic base.

Without the huge majorities Asians, Blacks and Hispanics give them, Democrats could not win the White House. Yet, in this year's primaries, the six top finishers in delegates were Biden, Bernie Sanders, Mike Bloomberg, Elizabeth Warren, Pete Buttigieg and Amy Klobuchar.

Democrats may prattle on about their glorious "diversity," but a closer look reveals a predominantly white senior officer corps, atop an army of minorities, whose shock troops are the Black Caucus, Black Lives Matter, antifa and The Squad, the latter consisting of four women of color.

There is something else of interest here.

While the statues being torn down in the revolution of the Democratic left are a variety of explorers, conquerors, colonists, missionaries, Confederates and presidents, all appear to have one thing in common.

All are white men.

The Democratic left wants to terminate the succession of white folks making the history of the country.

Thus the Democrats' problem that comes with Biden's choice of a running mate. Though demands are being made that minorities, who deliver half of all Democratic votes, be represented on the ticket, Biden is said to be leaning toward a white woman, Elizabeth Warren.

Choosing Warren would make this Democratic ticket like every other one in 220 years, save for Barack Obama's—an all-white ticket. It would pass over half a dozen women of color and put a white woman first in the line of succession to the presidency. And the 77-year-old Biden is promising to be a transition president.

If Biden overlooks the women of color being considered as running mates and picks a white woman, the rumbling of the coming rebellion of the minorities inside the Democratic Party will be heard loud and clear.