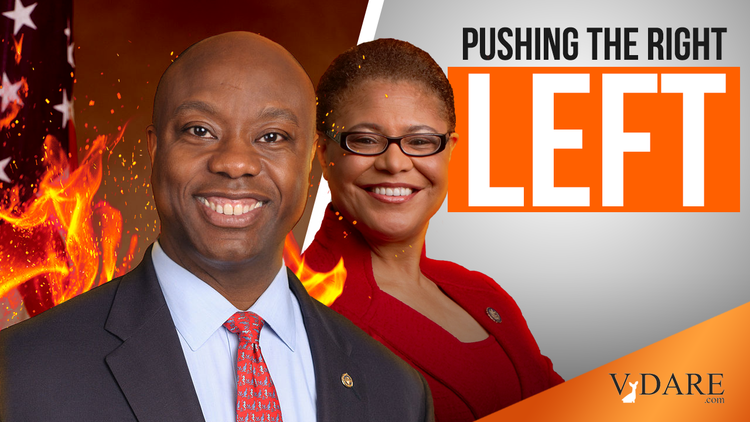 Sen. Tim Scott Shows It’s Time For GOP To Give Up On Great Black Hope Strategy

South Carolina Sen. Tim Scott, the lone black GOP Senator, might be the most insidious Republican in Washington. He’s not as bad on immigration as Lindsey Graham. He’s not as desperate for media adoration as Mitt Romney. And he doesn’t vote with the Democrats as much as Lisa Murkowski. He’s apparently a boilerplate Beltway conservative—except on race. And, as the Historic American Nation meets the Great Replacement, that’s increasingly what (so to speak) Matters.

No Republican is more responsible than Scott for browbeating the GOP into taking a knee before the Black Lives Matter hysteria. Scott advocates terrible police “reforms,” insists that conservatives embrace a multicultural America, and demands the party do more to serve non-white interests. He even polices President Trump for his “tone” [Fox’s Cavuto Presses Sen. Tim Scott on Trump’s Tone: ‘Many in Your Party’ Are Concerned, by Josh Feldman, Mediaite, June 2, 2020].

Scott is the loudest voice for totally unnecessary “police reform” within the GOP. Last month, he introduced the JUSTICE Act, which demands that police departments report use of force and share officer disciplinary records, and discourages chokeholds and other tough police tactics. It also establishes civilian commissions to investigate how police affect blacks and suggest more “reforms” although it does not eliminate qualified immunity, which protects police from frivolous lawsuits and is a major item on the Democrat wish list. Most Senate Republicans supported Scott’s bill, but Democrats stalled it because it didn’t do enough damage to tried-and-true standard police practice [GOP police reform bill stalls in Senate as Democrats vote to block debate, by Grace Segers, CBS News, June 24, 2020]. 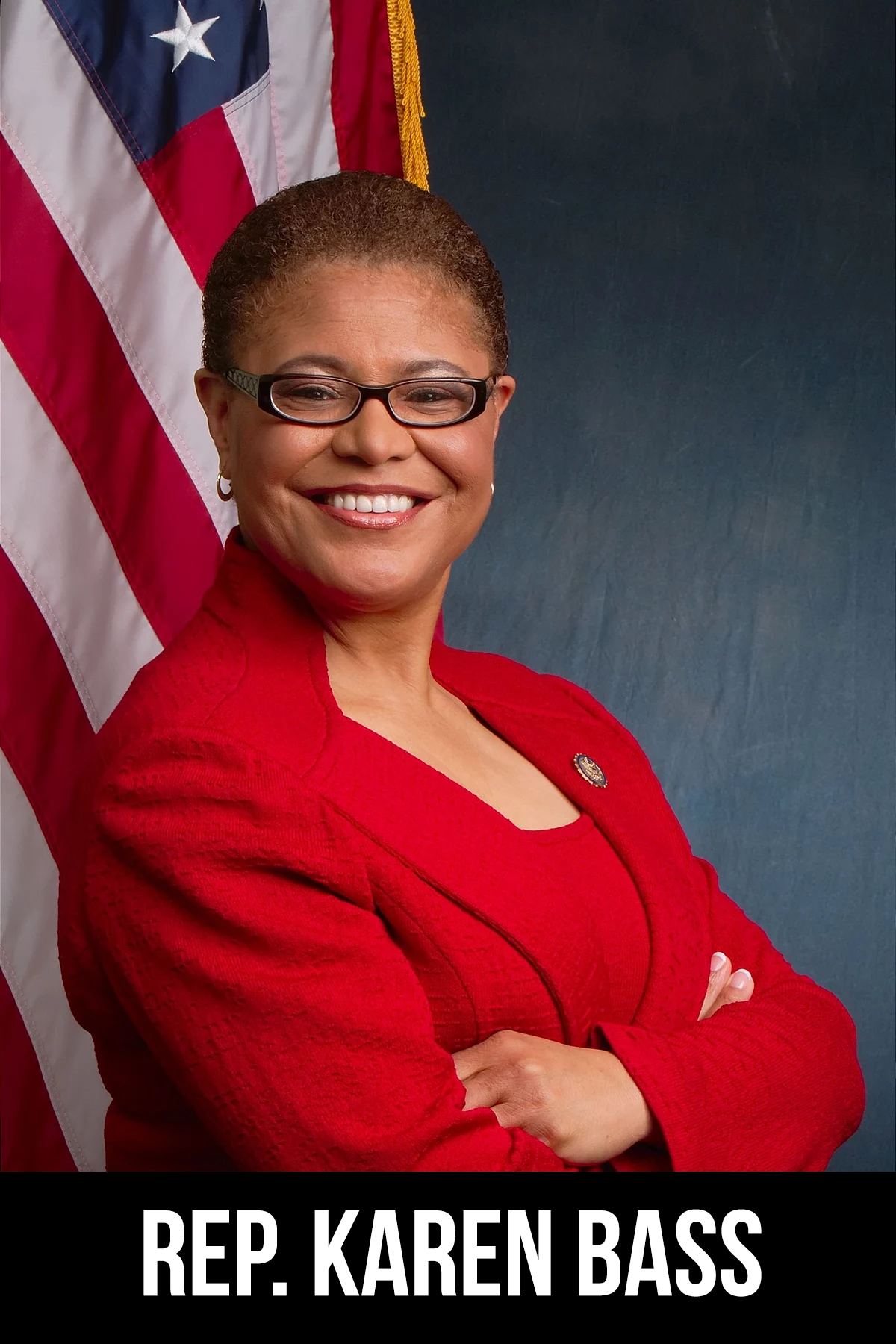 Ever tenacious, Scott hasn’t given up. He is talking with Rep. Karen Bass, a black Democrat from California, on giving the Democrats more of what they want. Bass proposed the Democrats’ police reform bill that eliminates qualified immunity and imposes other radical measures. Scott insists that qualified immunity is a non-starter, but he’s happy to cuff the cops in other ways [‘Lazarus Moment’ Coming for Police Reform in Congress? Karen Bass & Tim Scott Are Continuing Bipartisan Talks, by Eric Revell, Countable, July 13, 2020].

Scott also strongly supported Jared Kushner’s “criminal justice reform” and praised his First Step Act for providing “an amazing opportunity to ensure the scales of justice are weighted equally for all Americans” [Sen. Tim Scott: Passage of First Step Act a victory for criminal justice reform, Scott.Senate.gov, December 20, 2018]. The bill sprung hundreds of drug dealers and other felons from jail.

Meanwhile, Scott wants to get tough on lynching. Although lynching occurs about as often as witch burning, Scott has sponsored legislation to make it a federal crime [U.S. Sen. Tim Scott joins two Senate Democrats to make lynching a federal crime, by Jamie Lovegrove and Schuyler Kropf, The Post and Courier, June 29, 2018]. The current anti-lynching bill, which has passed the House, would also treat “racist” vandalism (like painting over Black Lives Matter murals?) and other minor infractions as lynching—and would carry mandatory 10-year sentences [The Federal 'Anti-Lynching' Bill Sacrifices Justice for Symbolism, by Jacob Sullum, Reason, June 25, 2020]. In other words, lynching is no longer just lynching. It means whatever the Democrats say it means.

Scott is not awful on immigration—his career NumbersUSA ranking is actually A+—although recently B+—but he’s hardly reliable. He publicly supported Kushner’s mediocre 2019 immigration plan and the president’s national emergency declaration on the border [Sen. Scott Statement on the Emergency Declaration Resolution of Disapproval, Scott.Senate.gov, March 14, 2019]. Then again, he opposed so-called “family separation” for detained illegal immigrants. Needless to say, he also proclaims that  America is a nation of immigrants and diversity is its strength [Tim Scott reacts to Trump 'shithole' controversy: 'Our strength lies in our diversity,' by Daniel Chaitin, Washington Examiner, January 11, 2018].

“The American family was born from immigrants fleeing persecution and poverty and searching for a better future,” he falsely said in a 2018 statement condemning Trump’s “s***hole” comment. “Our strength lies in our diversity, including those who came here from Africa, the Caribbean and every other corner of the world. To deny these facts would be to ignore the brightest part of our history.”

Last month, Scott condemned Trump for sharing a video of a Trump supporter mockingly saying “white power” at left-wing protesters, calling it “indefensible” [Tim Scott condemns "terrible" video shared by Trump showing supporter yelling "white power," by Melissa Quinn, CBS News, June 28, 2020]. In fact, the Trump supporter was reacting, very moderately, to a torrent of obscenities and accusations of Nazism from Biden supporters (something the White House should have pointed out instead of running away).

How determined is Scott to move the GOP left on race and “diversity”? In 2018, he deep-sixed two solid Trump judicial appointees to make the point. Scott kneecapped Ryan Bounds, who was headed to the Ninth Circuit Court, over an anti-multiculturalism op-ed the nominee wrote in college. It read like something from National Review, but Nanny Scott declared it racist. He also torpedoed Thomas Farr because he worked for conservative hero Jesse Helms’s campaigns in 1984 and 1990. Those campaigns, Scott declared, relied on “racial intimidation.” “We are not doing a very good job of avoiding the obvious potholes on race in America, and we ought to be more sensitive when it comes to those issues,” he said [Sen. Tim Scott tells fellow Republicans: Do better on judicial nominees, by Sean Sullivan, the Washington Post, December 8, 2018].

Scott is arguably the most powerful black Republican in history, although his power lies solely in his race. Great Black Hopes like Scott enthrall Establishment Republicans, who yearn for respectability and wrongly think they will attract black voters to the party. That is why he was appointed to the Senate, by Gov.  Nikki Haley, in 2013. No amount of evidence to the contrary seems able to dispel this Establishment fantasy. Thus Scott pulled just 8 percent of the black vote in the 2014 special election.

In other words, these Great Black Hopes bring no tangible benefit, but instead inhibit the GOP from frankly appealing to its white base, as Scott’s activities well show.

And of course James is pushing the party left on race. He has criticized Trump for his strong immigration comments and for mocking John McCain [The one Republican Senate candidate willing to call out Donald Trump, by Alex Isenstadt, Politico, May 9, 2020]. He claims that he has personal experience of “police racism” and said he “felt” the George Floyd video. He claims he considered protesting with Black Lives Matter following Floyd’s death. He also says he opposes saying “all lives matter” because it’s “hurtful and cruel in the moment” [A Black Republican Feels the Sting of Racism, but Is Silent on Trump, by Jeremy W. Peters and Kathleen Gray, New York Times, July 8, 2020].

Here are a few blasts from the past:

There are some good black Republicans. U.S. Supreme Court Justice Clarence Thomas and former Rep. Allen West have stood up for conservative principles and not sought to move the GOP left on race. But they are exceptions to Scott’s rule.

And there’s a very real danger that, in pandering to successive Great Black Hopes, the GOP will alienate its white working-class base that put Trump in the White House (and won him, for example, John James’ Michigan). This base voted for law and order, not “criminal justice reform.” It hates Political Correctness, doesn’t want more lectures about racism, and doesn’t care about offending liberals and phony black conservatives.

Scott’s agenda tells the Silent Majority their concerns are racist and less important than the handful of blacks who vote Republican.

It’s a plan designed to lose elections. Only a Stupid Party would run on it.