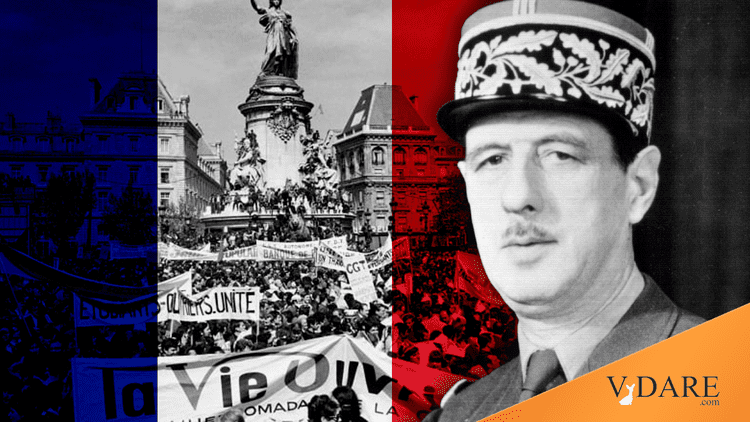 Peter Brimelow: Could Donald Trump Be The Charles De Gaulle Of 2020?

VDARE.com Editor Peter Brimelow writes: As I got yet another chance to write during this last stock market crash, it appears that, if you live long enough, everything comes round again. (Note that the Dow Jones Industrial Average has now rallied ferociously  from its March 9 low.) What is also coming around again this year: the political convulsions and street rioting of 1968, accompanied by elite media nervous breakdown. And, as I discussed in this column, originally published under the headline “Kid Gloves Or Bare Fists?” in the Times of London (July 23, 1988), it was much worse in France, where the ten-year rule of General Charles De Gaulle seemed to be on the point of collapse.

To put my 1988 column in perspective, you have to realize that, incredible as it may seem now, there was real panic among Republicans in the summer of 1988 as Michael Dukakis seemed to have established a decisive lead in the polls.

As it turned out, of course, George H.W. Bush’s GOP never dared challenge the Democrats’ dependence on Jackson and his Leftist allies directly—and won the 1988 presidential election anyway.

But not, I would point out, without some fairly brutal a.k.a. honest race-oriented attacks on Dukakis himself, notably the Willie Horton ad. (Additionally, note that I anticipated George H.W. Bush’s subsequent abandonment of the tax-cut issue during his disastrous presidency, leading directly to his defeat in 1992 and the curse of the Clintons.)

What does this mean today? I still believe that the answer to riots is ruthless coercion. I still agree with the late Eugene Methvin, writing in the pre-purge National Review (June 10, 1991):

And I still think the place to start was Minneapolis, the moment that Governor Walz and Mayor Frey gave their ignominious Friday night press conference [May 29] confessing that they had lost control of the city.

But I can’t rule out the possibility that Donald J. Trump, who didn’t do anything like this, is on his way to a landslide re-election this fall.

In my perpetual quest for self-improvement, the turbulent year of 1968 occupies a special place. I was a student at the time, and rudely derisive of my fellow students who seriously thought that the street shenanigans of our counterparts in France would force de Gaulle to resign. But my fascination with realpolitik, a trait common to all reactionaries, led me to make quite the opposite mistake: I thought he would bring in the army.

In fact, he merely stalled through the summer and eventually called an election, which he won overwhelmingly.

Ever since, I have been mildly inhibited by the knowledge that, in de Gaulle's place, I would have favored such a disastrous, or at any rate expensive, overreaction. France is not an Anglo-Saxon democracy, and de Gaulle was hardly a typical bourgeois professional politician. Nevertheless, there must be some evolutionary reason for the latter's congenital caution, blandness and profound aversion to anything resembling an idea. And, I tell myself, the evidence is clear that resolution of even the greatest crisis need not necessarily depend on confrontation.

I have had to tell myself this particularly sternly this week. In Atlanta, the Democratic Party has been crowning Governor Michael Dukakis and anointing Jesse Jackson. It has been basking in uncritical primetime television coverage, and Dukakis is expected to benefit from the usual post-convention boost in the polls, reconfirming his lead over Vice-President George Bush.

To grasp how extraordinary this development is, you have to remember that Jesse Jackson is perhaps the most vulnerable candidate ever to emerge as a serious contender for the presidential nomination of a major party.

The problem is even more serious than his complete lack of experience, dubious financial history, shady Chicago connections, suspected anti-Semitism, unmentionable private life and volatile personality. It is that he is a man of the Sandinista supporting, Castro-clasping extreme left..

Jesse Jackson represents the posthumous rehabilitation of the fellow-travelling Henry Wallace wing of the Democratic party, exorcised by the anti-communist Harry Truman wing in 1948, but now risen from the dead as those student radicals of the 1960s come of political age.

That this silent surrender can be described by Time magazine under the headline "Democrats enter the postliberal age"  [by Walter Shapiro, July 25, 1988], a measure of the invincible ideological ignorance of the American media—or of its disproportionate staffing by partisan Democrats.

All this year, I have debated with various Republican advisers the resulting technical problem: Should the Republican candidate(s) break the unspoken convention that you cannot criticize black politicians and hold Jackson and his party responsible for his sins?

It seemed to me that this would have forced the other Democratic candidates either to repudiate Jackson, provoking a Democratic civil war, or to defend him, making impossible the present ludicrous situation where polls show Dukakis has persuaded a large section of the American public that he is more conservative than Bush.

Either way, we would have scotched the current effort to elevate Jackson to Gandhi status.

The Republican advisers recoiled in horror from my idea. Far too dangerous, they said. And unnecessary. Everyone knew how crazy Jackson was. Why take risks?

This is unquestionably the approved professional answer. And silence can work: George Bush spent much of his primary campaign saying nothing, successfully relying on Ronald Reagan's coat-tails and Robert Dole's foul temper to do the job.

I am instinctively drawn to a Clausewitzian view of politics. In the last analysis, you have to fight battles to win wars; blood is the price of victory. But perhaps that is a melodramatic view of life peculiar to copy-hungry columnists. And—remember de Gaulle. So I am waiting humbly to see if the professionals are right. Dukakis's lead in the polls should evaporate. Jackson should backfire. Soon.

But I still don't see why Bush felt obliged actually to praise Jackson when speaking before a civil rights group recently [Bush, at N.A.A.C.P., Says Blacks Will Be 'Partners' in His Regime, by Gerald M. Boyd, New York Times, July 13, 1988]. At best, this appears weak and hypocritical. At worst, it might even convince foolish people that Jackson is really a fine fellow.

And I have some questions. For one thing, the US economy is extremely strong. The relationship between economics and presidential elections has been so close that econometricians have been able to model it. The model says Bush should win handsomely, by 54 per cent to 46 per cent. So why is he behind in the polls at all?

And again: in 1980, Reagan discovered tax cuts as a cure for stagflation. But he also established them as a Republican electoral weapon as decisive in its way as the Democrats' repeated emphasis since 1932 on the causes and consequences of the Great Depression.

Bush has now adopted tax cuts. But for a long time he was against them, not just as a policy—which simply reflected his depressing allegiance to conventional wisdom—but as a platform. What does this say about his political judgement?

I know de Gaulle did not bring in the army in 1968. But I am absolutely confident that if it had been necessary, he would not have hesitated.

Maybe George Bush can coast to the presidency—but what if he can't?