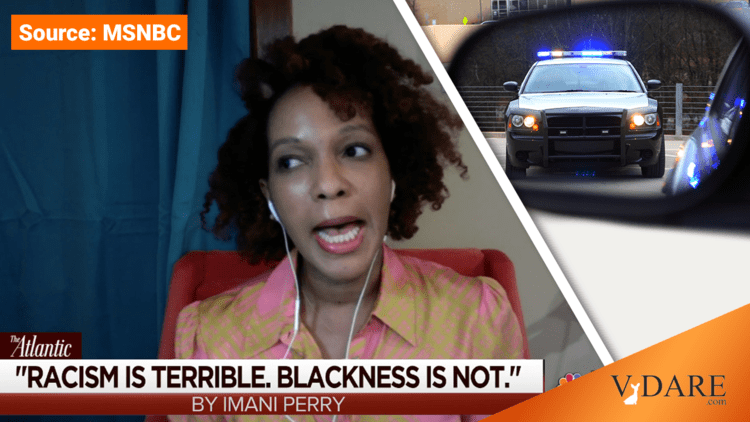 See, much earlier by Sam Francis: The Truths That Fake Hate Crimes Tell Us, 2004

If you were watching MSNBC last Sunday, you may have seen Imani Perry [Email her], professor of African-American studies at Princeton University, and wondered, as I did, Why do I know that name?

Professor Perry’s delightfully original point was that we need to “think in serious contemplative ways about the depth of American inequality.”

So perhaps we know her from her incisive commentary! I certainly haven’t heard anyone talk about American inequality. It really made me think.

But then I suddenly realized it’s that Imani Perry! The one who nearly destroyed a policeman’s life by falsely accusing him of racism!

Back in February 2016, Perry launched a series of tweets, alleging the following:

Oh my gosh, she could have been killed!

Naturally, her story became instant international news. The president of Princeton [Email him] leapt to her defense, firing off a letter to the chief of police, demanding an investigation. (I know Perry is a professor, but you’d think that, by now, more people would say, Let’s wait for the facts.)

Perry attributed the universal acceptance of her story to her “small build” and her association with “elite universities” such as Princeton.

Just a thought, but it might also be because she’s black.

Perry wasn’t arrested “for a single parking ticket three years ago.” After being stopped for going 67 mph in a 45 mph speed zone, officers ran her name and discovered her license had been suspended. She was arrested for driving with a suspended license.

The officer was almost comically polite to the professor. He gently explained to Perry that because of her suspended license, “What you’re going to have to do is come with us, it’s $130, so if you have that money we’ll be able to post and we’ll be able to get you right back out.” He offered to drop her at the university, saying, “You really shouldn’t be driving because of your suspended license.”

He informed her that police are required to cuff anyone being transported to the station and assured her that no one would have to know. As for not being allowed to make a phone call, he clearly told her that once they got to the station, “You can make as many phone calls and texts as you want.”

A policeman was kind to her, so Perry turned around and accused him of racism, secure in the knowledge that no one would dare challenge whatever she said.

It would have been firing offense for him, but not for her. She is still gainfully employed as a Princeton professor—and a sought-after guest on MSNBC and NPR! (It must be because of her “small build.”)

There are dozens of these cases. Tweet me your favorites!

Here’s another, from one of our blessed immigrants, Minati Roychoudhuri, professor at Capital Community College in Connecticut. (Really! That’s not one of my proposed new names for Yale, currently named for a slave trader.)

In 2015, Roychoudhuri (B.A., M.A., Utkal University, India) wrote a letter to the commissioner of public safety, as well as “the Senator and Legislator of my constituency” (she teaches English), claiming a policeman had racially profiled her.

Her letter said: “The officer did not give me any reason as to why had stopped me. His asking if I could speak English shows that he had racially profiled me and was not able to give me a concrete reason for stopping me. Further, the officer had checked ‘Hispanic’ in the race category in the infraction ticket.”

The professor also noted that, “I teach about diversity and the negative impact of racial profiling, I have now become a target of the same insidious behavior! It is easy to connect the dots with the nationwide racial profiling which has led to serious consequences.”

(It’s such a boon to have immigrants teaching about the horrors of “racial profiling” in America because we can’t get anyone to do that!)

Then police released the dashcam footage.

Below are relevant portions from the transcript. I didn’t include the part where the officer asked Roychoudhuri if she spoke English because he never did that. It was a bald-faced lie.

Officer: Hi ma’am, do you know why I’m stopping you today?

Officer: OK. There’s that big gore area with white lines painted across it and you cut in front of it, in front of me, thinking it’s a lane or something. You have to wait until it’s a dotted white line. License and registration.

Officer: Ma’am. So I wrote you the infraction for that improper lane change that you did.

Roychoudhuri: Please, you know, I probably crossed over there, and that’s why I did it. … Obviously I did that. … My (record) is absolutely clean.

Officer: OK. So I wrote you an infraction for that improper lane change that you did.

Officer: The answer date is on the front of it and the instructions are on the back of it.

Officer: It’s a mail-in infraction. All you have to do is mail in, either a check or money order, and mail it in.

(NOTE TO MSNBC: Roychoudhuri [Email her] would make another excellent guest to discuss racism in America.)

After the 2014 killing of Mike Brown in Ferguson, Missouri—a justified killing according to everyone, including Obama’s Department of Justice—the big demand was that police be required to wear bodycams.

That was a miscalculation. Turns out body cameras are the best thing that ever happened to cops. Which reminds me: The public has still not seen the bodycam footage from the officers arresting George Floyd, explaining how he ended up on the ground.

Maybe we should wait for the facts.