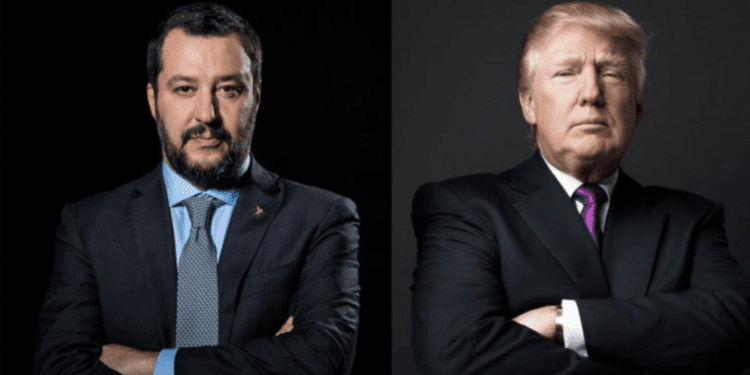 “Never Let A Crisis Go To Waste”—Trump Should Listen To Salvini On Coronavirus, Impose Nationalist Agenda

“We’re all nationalists now,” said Nigel Farage, as countries around the world are implementing containment programs on a national level, without bothering with supranational bodies like the EU [Farage on Coronavirus: “We Are All Nationalists Now,’ Boris Negligent, by Victoria Friedman, Breitbart, March 14, 2020]. But President Trump has been fairly restrained—thus his travel ban, only directed against Europe, is probably too late to contain the virus [Trump’s Europe travel ban explained, by Saim Saeed, Politico, March 13, 2020]. In contrast, European populists are hammering their governments for not being nationalist enough and calling for sweeping crackdowns on migration [How European populists are using coronavirus as a political tool, by Ylenia Gostoli, Al Jazeera, March 3, 2020]. As usual, Italy is leading the way, with sabotaged immigration patriot leader Matteo Salvini crusading against the too-little-too-late approach of Prime Minister Giuseppe Conte [Salvini attacks Conte: ‘He wants to clear his conscience’ over Italy’s coronavirus crisis, by Alana Mastrangelo, Breitbart, February 25, 2020]. In contrast, Trump may have waited too long.

Trump initially tried to downplay the crisis to protect the stock market and the economy. It didn’t work [Poof. A huge chunk of stock market gains under Trump are gone, by Christine Romans, CNN, March 12, 2020]. A more charitable reading is that President Trump was trying to project calm and avoid a panic. If he was a Democrat, many of the same journalists and politicians who are criticizing Trump today would be praising him for his courage [Trump, self-professed germaphobe, continues shaking hands amid coronavirus concerns, by Lauren Lantry, ABCNews, March 6, 2020]. After all, it’s no small thing for President Trump, a self-confessed germophobe, to keep shaking hands and remain available for meetings with people around the world [The Purell presidency: Trump aides learn the president’s real red line, by Daniel Lippman, Politico, July 7, 2019].

Still, for a supposed “authoritarian,” President Trump has not used massive state power to stop this epidemic. He imposed travel restrictions on China in January, but it wasn't a full "ban," as there were numerous exceptions [Proclamation on Suspension of Entry as Immigrants and Nonimmigrants of Persons who Pose a Risk of Transmitting 2019 Novel Coronavirus, White House, January 31, 2020]. It was also too late. The first-known American case and the first case in Chicago were both travelers who had recently been through Wuhan [Thousands arriving from China and Europe at U.S. airports, have faced no coronavirus screening, Associated Press, March 14, 2020]. It’s outrageous that there has not been increased efforts to protect America’s porous southern border. Instead, we face the humiliating spectacle of Mexico considering securing its border to keep us out [Could Mexico close its border with the US?, by Richard Allyn, Associated Press, March 13, 2020].

Despite Trump’s caution, journalists are still worrying about the president’s “authoritarianism” and “nationalism.”

Paradoxically, others claim that it was Trump’s “authoritarianism” that caused him to downplay the coronavirus’s severity [Trump’s efforts to muzzle health officials and downplay coronavirus mirror the tactics of an authoritarian regime, experts say, by Sonam Sheth and John Haltiwanger, Business Insider, March 1, 2020].

Well, which is it? Is downplaying the crisis and trying to pretend that it’s business as usual “authoritarian,” or is imposing sweeping controls “authoritarian?” Even “experts” should recognize it can’t be both.

Contrast this with the approach Matteo Salvini has taken from the crisis’s earliest days. In late February, he demanded the government “seal our borders now,” a policy program that CNN obviously hates [This pandemic risks bringing out the worst in humanity, by Angela Dewan, CNN, March 15, 2020]. However, had it been done, the entire country would probably not be locked down today.

Salvini also called on Prime Minister Giuseppe Conte to resign, after the PM said he was “surprised” by what’s happening [Italy’s Far-Right Seeks to Gain from Coronovirus Outbreak, by Ciara Nugent, Time, February 24, 2020]. “It’s simply insane that the landings [of migrants] continue as if nothing he happened,” said Salvini, “this government is every day more reckless and deplorable.”

Salvini is also advocating a huge economic program to help Italians ravaged by the crisis, as he clearly understands economic populism is needed along with national security [Salvini demands $11 billion aid for Italians hit by coronavirus lockdown, by John Follain, Bloomberg, February 26, 2020].

Granted, Matteo Salvini enjoys the advantage of not being in power. He doesn’t have to worry about keeping the markets happy. Yet this just shows the larger point. Economies built on the free movement of goods and peoples have vulnerabilities they don’t tell you about in Reason Magazine.

We’ve long know that capitalists who want cheap labor are ultimately the “rope sellers” who import an underclass that will vote for socialism. Now we see another way capitalism can destroy itself. The market’s desire for a borderless world encourages national leaders to avoid forceful, disruptive actions because they might hurt their domestic economies. Ultimately, this means problems which could have been stopped early become catastrophes.

The obvious retort—how do they know? Currently, Iran is being ravaged by the virus, and we do know that the migrant wave being orchestrated by Turkey isn’t “Syrian” but is a mass movement from the Middle East. What sense does it make to demand testing within the country while not demanding testing or even tracking of those trying to break into Western countries?

Those of us who support a border wall have often said that you either have one big wall outside to protect the country (John Derbyshire’s Libertarianism in One Country) or you will have lots of little walls inside the country as the middle class and rich try to build barriers between them and the Third World poor. Now, we have the absurd situation of cities, states (in the American sense), and countries trying to impose quarantines and track what people are doing without any attempt to close external borders.

One of the most stringent comes from New York Governor Andrew Cuomo, who has imposed a quarantine on the town of New Rochelle, but would never extend this logic to Third World immigration [N.Y. Creates ‘Containment Zone’ Limiting Large Gatherings in New Rochelle, New York Times, March 11, 2019].

The scale of the Coronavirus outbreak is so unprecedented that it’s already made me agree with Meghan McCain and Rich Lowry—two people whose opinions I normally consider a sure guide as to what is wrong.

Meghan McCain argued “there are no libertarians in a pandemic” because there is an obvious need for government infrastructure to track disease vectors and impose containment policies [‘There are no libertarians in a pandemic’: Meghan McCain Says When Crisis Hits, Everyone Wants Infrastructure, by Virginia Krutua, Daily Caller, March 13, 2020]. This is true but presupposes government competence. The problem is that an incompetent government hampered by Political Correctness and diversity could make things worse. Unfortunately, we may be already at that point—it’s why President Trump couldn’t take strong measures at the beginning.

And Rich Lowry is correct when he says the populist nationalist movement isn’t being “nationalist enough” [On Coronavirus, the Nationalists Aren’t Nationalist Enough, by Rich Lowry, National Review, March 13, 2020]. He’s right that President Trump should not adapt some “free market” approach to this problem but should take decisive action because this crisis validates “his key [nationalist] assumptions.”

One of the most important: America’s extreme dependence on China, especially for medical supplies, has had disastrous consequences [Coronavirus shows Donald Trump was right all this time about China, by Madison Gesiotto, The Hill, March 9, 2020]. Madison Gesiotto serves on the advisory board of the Trump campaign, so perhaps there’s a dawning awareness within the White House that pollical advantage and national interests align in this case.

The MSM is going to criticize political leaders like Donald Trump or Matteo Salvini no matter what they do—especially if they advocate border controls and migrant screening. If President Trump is going to be accused of authoritarianism for not acting, he might as well act and deal with the same political consequences anyway.

As well as with Tucker Carlson, President Trump needs to talk to Matteo Salvini.

Especially given the (literal) incoherence of his probable Democratic challenger Joe Biden, now’s the time for President Trump to stop with the half-measures. Ban legal immigrants and refugees, impose real border controls, strict screenings for disease, and national control over medical supplies—and while you’re at it, sweep out Politically Correct policies in government hiring and staffing. And publish data on the disease’s racial incidence.

“Never let a crisis go to waste”—especially when one proves that nationalists have been right all along.