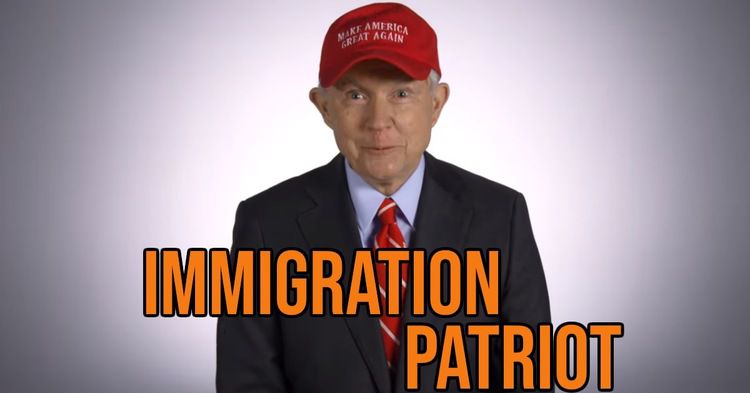 Earlier, by Hank Johnson: Is Immigration Wimp Tommy Tuberville REALLY The Best Alabama Can Get To Succeed Jeff Sessions?

The next senator from Alabama will be Jeff Sessions—if President Donald J. Trump doesn’t get in his way. The former U.S. attorney general announced his candidacy last week. Though early reports suggested Trump might try to stop Sessions’ return to Capitol Hill, his odds look good. Prominent conservatives and nearly a dozen Republican senators back him and he sits atop the primary polls. But one Trump tweet could knock him down. That would be a tremendous disservice to one of Trump’s most loyal supporters and to his own agenda. Immigration patriots to Trump: stay your twitter finger.

Half of Fox News’s primetime lineup is pro-Sessions. Tucker Carlson hosted the former senator the day he announced and Laura Ingraham has tweeted her support.

Ann Coulter, Steve Bannon and probably Breitbart should be expected to back Sessions.

Another plus: Sessions has a $2.5 million war chest.

And remember this: Last time he ran, the Democrats didn’t even field a candidate due to his massive popularity.

Sessions’ primary opponents are worth discussing briefly because they aren’t in his league on the two most important matters for immigration patriots: the National Question and the Historic American Nation.

Tommy Tuberville was the frontrunner in the primary before Sessions entered the race. He’s also the worst candidate from an immigration patriot point of view.. As a football coach at the University of Mississippi, he supported the ban on the Confederate flag at its stadium. His campaign includes staffers who support increasing immigration and one who was a senior staffer at Mark Zuckerberg’s pro-Amnesty FWD.us. Tuberville has sympathized with illegal immigrants on the campaign trail and says Republicans need to back off legal immigration [Tuberville on legal immigration: ‘I think we should back off it right now’, by Jeff Poor, Yellowhammer News].

Unsurprisingly, Tuberville is the most frantic to smear Sessions as a “traitor” to Trump. His campaign is already aggressively pushing this line in the hope voters will ignore Tuberville’s treason to the South [Campaign ad casts Sessions as a 'traitor' ahead of expected Senate run, by Tal Axelrod, The Hill, November 7, 2019].

Rep. Bradley Byrne, who represents Alabama’s 1st district, is the other threat to Sessions. He’s better than Tuberville, with a career A rating for Numbers USA. However, he co-sponsored the Indian green-card giveaway known as the “Fairness for High-Skilled Immigrants Act” this summer. His current voting record may simply reflect his district. He too close to the Establishment to be fully trusted.

The 2017 Republican Senate nominee Roy Moore is also running again. He sits at fourth, but Republicans absolutely do not want him. Disgracefully unfair sexual misconduct smears, and typical GOP Establishment cowardice, sank his candidacy for Senate in 2017. But beyond that, he is not particularly an immigration patriot. He didn’t even know what the Deferred Action for Childhood Arrivals program was when he ran in 2017 [Roy Moore, leading candidate in Alabama Senate race, doesn't know what DACA is, by Philip Wegmann, Washington Examiner, September 1, 2017].

But Trump is still Sessions’ biggest problem. The president apparently refuses to forgive him for recusing himself from the Russia investigation, even though Robert Mueller’s investigation turned out to be a dud and the current Trump impeachment circus has nothing whatever to do with Russian collusion. [Sessions Senate bid would draw Trump White House opposition, by Kerry Picket and David M. Drucker, Washington Examiner, November 06, 2019].

Good news is, that might not be true. Trump has not yet (as of Thursday night!) unleashed a tweetstorm against Sessions. He told the press last week that he might endorse his former attorney general [Trump says he won't campaign against Sessions in Senate run, by Abbey Marshall, Politico, November 8, 2019]. But that’s probably unlikely before the March primary and would counter what White House officials tell reporters Trump might well endorse another candidate just to spite Sessions, especially if the race ends in a run-off. Alabama requires one candidate to secure the majority of the vote to be declared the winner.

For his part, Sessions emphasized his loyalty and support for Trump in his announcement video.

This is a crucial time in our nation’s history. The Left has become unhinged and they are threatening the very things that make America great. I’m running for U.S. Senate because we have to fight back. Let’s go!

This is a crucial time in our nation's history. The left has become unhinged and they are threatening the very things that make America great. I'm running for U.S. Senate because we have to fight back. Let's go! https://t.co/E1Ti9aYKNT pic.twitter.com/IlueZhTiT4

Clearly, only one party has hard feelings.

Trump’s hostility toward Sessions approaches the outrageous given the legion of Never Trumpers he forgave after 2016. Trump has filled his administration with people who not only didn’t vote for him and but also publicly attacked him. Yet they all receive far more from Trump than Sessions, a loyal supporter.

One example: Ken Cuccinelli, whom Trump wanted to appoint Homeland Security Secretary. In 2016, Cuccinelli led the effort to kill Trump’s nomination at the Republican National Convention. He failed, thankfully, but that should have been a huge sin in Trump’s eyes. Yet Trump forgave him—and rightfully so. Cuccinelli is doing a great job as acting director of U.S. Citizenship and Immigration Services and is committed to curtailing illegal immigration.

Similarly, Trump’s Chief of Staff Mick Mulvaney called Trump a “terrible human being” a week before the 2016 election, indicating he wouldn’t vote for Trump. The president overlooked it and made him one of the first hires of the administration. Mulvaney is now one of the most powerful people in the administration.

Energy Secretary Rick Perry was the first Republican presidential candidate to attack Trump during the 2016 primaries, calling the future president a “cancer on conservatism [Rick Perry Calls Donald Trump a 'Cancer on Conservatism', by Ali Dukakis, ABC News, July 22, 2015]. .” Yet Trump forgave him

And former UN Ambassador Nikki Haley was virulently anti-Trump in 2016 and even compared him to Charleston shooter Dylann Roof [Nikki Haley links Trump's rhetoric to Charleston church shooting, by Jesse Byrnes, The Hill, June 3, 2016]. But Trump overlooked that, too, and brought her into the administration. Trump even endorsed Haley’s book this week, although she was a disloyal UN ambassador who tried to derail his immigration objectives.

Sen. Mitt Romney spent 2016 attacking Trump and even publicly considered a Third Party run. That did not dissuade Trump from considering Romney for secretary of state. After that, Romney returned to attacking Trump. Trump, once again, overlooked this criticism and endorsed Romney for the Senate [Trump Has Endorsed Mitt Romney. But Romney Once Called Trump a 'Fraud' and Trump Said Romney 'Choked', by Jennifer Calfas, Time, February 20, 2018]. Romney has paid Trump back by becoming his most vocal Republican critic in the Senate.

While these absolved politicians were anti-Trump, Sessions risked his political future when he became the first Republican senator to endorse the eventual GOP nominee. Before his formal endorsement, Sessions fearlessly praised Trump and appearing on stage with him. The Alabamian helped Trump win the GOP nomination—yet now the president’s supposed loyalists would deny Sessions another shot at the Senate.

Sessions was also a great attorney general. As I wrote last November following his departure from the administration:

He worked hard to make immigration courts more efficient and tougher on illegal immigrants. Sessions’ DOJ revived and implemented Trump’s travel ban. He issued the directive that scrapped the Deferred Action for Childhood Arrivals program and ordered the withdrawal of federal funding from sanctuary cities. (Both measures are of course being harassed by Leftist judges, but the Administration may prevail at the Supreme Court.)

Sessions also worked to end the odious “Catch And Release” policy toward illegal immigrants by demanding that every migrant caught entering the country was slapped with a federal misdemeanor.

Additionally, Sessions rescinded the Obama Department of Justice’s light-on-crime policies and pulled back politically-motivated DOJ investigations into many local police departments. He also asked for prosecutors to consider the death penalty against the worst drug dealers involved in the opioid epidemic [Jeff Sessions turned Trump’s “tough on crime” dreams into reality, by German Lopez, Vox, November 7, 2018].

Some Republican senators have adopted Sessions’ immigration patriotism, but they lack his total commitment. Granted, Senators Tom Cotton and David Perdue bravely sponsored the RAISE Act that cuts legal immigration by half and ties immigration to merit and English ability. Yet they also support the Fairness for High-Skilled Immigrants Act. Their fellow RAISE Act sponsor Josh Hawley seems more focused on limiting social media use than limiting immigration [Senator Pushes Bill To Curb 'Exploitative And Addictive' Social Media Practices, by Tim Make, NPR, August 14, 2019]. Sessions’s main issue is immigration and we can trust him to not back green-card giveaways to India.

Sessions would be perfect to lead the fight to reduce immigration if Trump wins again. The president needs lawmakers who believe in his 2016 message and will fight tooth and nail to see it enacted.