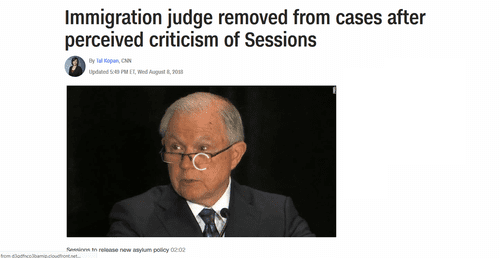 The union for Immigration Judges has declared jihad on President Donald J. Trump and Attorney General Jefferson Beauregard Sessions III. In response to the supervision of a recalcitrant, insubordinate, and lazy member of their union, Steven Morley, the National Association of Immigration Judges (NAIJ) declared that they are independent of supervision and could do anything they well please. While it's filled with platitudes, the real import of the NAIJ grievance in the case of Morley is to challenge the immigration policy of the Trump Administration, which as minor officials under the supervision of the Attorney General, and beholden to the President for their authority, they have no right to do. If they don’t like implementing the Trump Administration policies, they can go find work elsewhere.

The Justice Department plans to take dozens of cases away from an immigration judge who has delayed deportation orders, in part for perceived criticism of Attorney General Jeff Sessions, the union representing immigration judges said Wednesday.

Sadly, CNN does not give much detail of the other issues at hand besides the one illegal alien whom Morley has some strange obsession to protect from deportation. (An earlier story said that "Judge Steven Morley has overseen the immigration case of Reynaldo Castro-Tum for years. ") But it appears that the one illegal alien that Morley was protecting was only the tip of the iceberg.

The cases all involve young undocumented immigrants and whether they got adequate notice from the government about hearings at which they failed to appear. Weil also told Morley that he himself should have either ordered Castro-Tum deported or terminated the case altogether.

The discerning will realize that there is a pattern there, Morley apparently did not want to deport illegal alien minors who failed to appear in his courtroom. And he was reaching for straws, claiming that it is just about making certain that the alien in question had adequate notice of the hearing. That does not explain though the multiple continuances for the same issue in each separate case where the alien repeatedly failed to appear even after additional notices were sent.

In all of the cases that he has been told are being reassigned, Morley had closed the cases because the government did not satisfy his concerns about the accuracy of the addresses and information from the Department of Health and Human Services regarding the immigrants’ whereabouts were, the grievance said.

An accurately delivered notice to the alien is therefore clearly not the issue. The issue is that Morley does not want to deport illegal aliens. He has an ideological agenda. Mass immigration designed as the demographic displacement of the historic American nation.

CNN reporter Tal Kopan was less than fully honest (surprise!) when she gently broached another topic that implicated Morley. It appears besides being insubordinate by repeatedly not following lawful instructions from his superiors (in this case the Board of Immigration Appeals and Attorney General Sessions) he also was actively insubordinate by attacking the Board and the Attorney General in statements from the bench in the case of the illegal alien from Guatemala.

Assistant Chief Immigration Judge Jack Weil told Morley that comments in the Castro-Tum case were perceived as “criticism” of the Board of Immigration Appeals and attorney general’s decisions and that they were “unprofessional,” according to the grievance filed by the National Association of Immigration Judges.

While Kopan links to the actual decision by Sessions in the case of Reynaldo Castro-Tum, she failed to provide a link to the full statement by EOIR spokesman Weil, detailing Morley’s misconduct. Clearly, Kopan, like Morley, has her own agenda--more mass immigration and death to America by demographic displacement. What Kopan is glossing over and minimizing by failing to provide details is that Immigration Judges do not have the independence to attack in official proceedings the agency they work for or their superiors. That is the textbook definition of insubordination, which is an offense served by termination.

And even the NAIJ admitted that Morley was insubordinate, they just defended the insubordination.

“He’s being targeted for what is perceived to be criticism of the attorney general when it is in fact just a judge doing his job, raising concerns about due process,” Judge Ashley Tabaddor said Wednesday on behalf of the National Association of Immigration Judges.
A spokesman for the Executive Office of Immigration Review, which administers the immigration courts, said there were concerns about the judge’s “conduct.”

Subordinate employees of the Department of Justice do not “raise concerns about due process” from the bench in response to when they are being corrected or given direction by their lawful superiors. There is no right to speak in a case or controversy in opposition to lawful instruction or correction by a superior while on official duty and in a legal proceeding.

Morley is not alone, in a similar case, this correspondent reported on Michael P. Baird, another Immigration Judge who had a difficulty with doing his job. Like Morley, Baird just could not deport illegal alien minors who entered during the Obama Surge of 2014. Fortunately, impeachment is not necessary, Attorney General Sessions can dismiss Morley and Baird, as well as Ashley Tabaddor of the NAIJ for aiding and abetting insubordination.

The grievance filed by Tabaddor and Morley is clearly an attempt to do things, one declare Immigration Judges free from supervision and discipline, long a goal of the union, and more perniciously impose an Immigration Court Administrative Amnesty for illegal aliens. Both are political goals expressly prohibited to subordinate officials of the Executive Branch.

The immigration judges have long bemoaned their structure under the Justice Department, but have taken particular issue with many of the moves pursued by the Trump administration that they say interfere with their ability to conduct fair and impartial court proceedings.

The NAIJ can bemoan all they want, but their political agenda is obvious: they want to be real judges, but they aren’t. They are clearly attempting to get that “independence” through a lawsuit, which this grievance is the predicating action.

Clearly it is time for AG Sessions to rein in these “judges” who think they are “independent.” Prior to 1973, these “judges” were not even called judges, they were titled Special Inquiry Officers, and were not even attorneys, they were long serving Immigration Inspectors and Immigration Examiners, the line employees of the then Immigration and Naturalization Service (INS), who decided appeals from aliens without any “independence” but with objectivity and long experience.

1952 – Congress combined all previous immigration and naturalization law into one statute, the Immigration and Nationality Act (INA). The INA eliminated the Special Inquiry Boards and established special inquiry officers to review and decide deportation cases.

The solution to the problem of kritarchy in the EOIR and insubordinate “Immigration Judges” is to take them down a peg. Eliminate the title and robes of a judge, return those employees reviewing immigration law decision to Special Inquiry Officers, and make it certain they are Executive Branch employees subordinate to the President and the Attorney General.