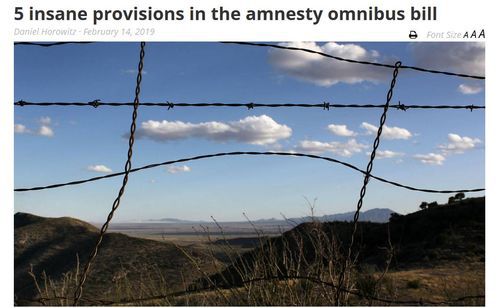 The Watcher reported earlier this week that Congress’s budget compromise is terrible. Unfortunately, the bill is even worse than first thought--and has a good chance of passage.

The deal allots a meager $1.375 billion for the wall and limits the number of beds in immigration detention facilities. Those facts were clear at first. Now it turns out that the bill forbids the detention or deportation of any adult claiming to be a sponsor or relative of an illegal alien minor, as well as giving counties along the border the power to veto wall construction in their jurisdiction. [5 insane provisions in the amnesty omnibus bill, by Daniel Horowitz, Conservative Review, February 14, 2019]

WOW! Buried in the spending agreement is a de facto amnesty for anyone near a UAC. This will exacerbate the border crisis and threaten public safety, as many MS-13 arrests have been UACs.
@realDonaldTrump said he would look for landmines in the text. Well, here is a big one. pic.twitter.com/S6B9vrDgr3

Immigration patriots were aware that Congress was not going to give President Trump the necessary funds for the wall. The President has to get the money via executive action—without a question. But signing this bill would prevent Trump from building the wall and enforcing immigration law. Every Democratic county on the border would refuse the administration’s request to build the wall, giving migrants a clear path into the country.

Additionally, every illegal alien would know to take a child with them for the crossing so they can escape detention.

This deal was negotiated by two Republicans, Alabama Sen. Richard Shelby and Texas Rep. Kay Granger. One hopes they were simply too stupid to realize what the Democrats hid into the deal. No cognizant Republican should think any of these stipulations make for a good deal. [Negotiators reach deal ‘in principle’ to avert shutdown, by Sarah Ferris, Heather Caygle and Burgess Everett, Politico, February 11, 2019]

President Trump has voiced that he will sign the bill and declare a national emergency at the same time.[Senate approves border deal to avert shutdown, Trump to sign it and seek wall money elsewhere, by Erica Werner, Damian Paletta, Seung Min Kim and Rachael Bade, The Washington Post, February 14, 2019] He has a problem in that the very thing he signs handcuffs him from pursuing his immigration policy in any shape or form. The bill would make the immigration situation worse, even with the DoD money reapportioned for the wall and the money Congress has agreed to give.

The bill passed the Senate, but it hasn’t made through the House yet. Hopefully, conservative congressman shear the bill of its terrible provisions before it reaches the President’s desk. Otherwise, Trump must veto it. His presidency depends on it.