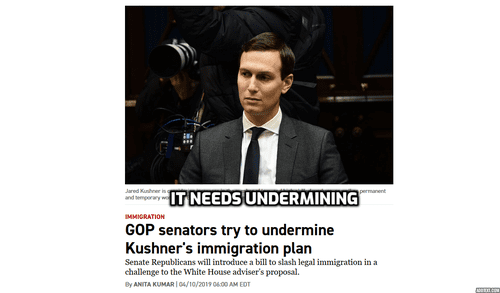 The RAISE Act cuts legal immigration by half and reforms our broken system to favor American interests. It would eliminate the diversity visa lottery system and limit America’s yearly refugee intake at 50,000. The move was made to undercut Jared Kushner’s cheap labor-friendly immigration plan and to remind President Trump of his old promises.

"Sometimes the president needs to be reminded that he was elected to do something about our immigration problems. The focus is always on the border and points of entry, but his message went beyond that. This is about giving the American worker a fair shake and protecting them from low-skill workers who undercut wages for the average American," a Republican aide told the Washington Examiner. "We're ensuring that our federal government is putting American workers ahead of business interests." [GOP senators introduce bill to cut immigration, rebuke plans by Jared Kushner, by Daniel Jativa, Washington Examiner, April 10, 2019]

Florida Rep. Francis Rooney introduced the RAISE Act as part of a solid immigration agenda. “We are pushing an all-encompassing strategy combining the RAISE Act, tightening up the Asylum process and making E-Verify mandatory, as well as requesting that the House appropriate funds to complete the wall where it is needed," Rooney said.

As VDARE.com readers may be aware, Kushner has convened talks with a dozen groups including the Chamber of Commerce and various Koch operations to hash out an immigration plan. The proposal was expected to dramatically increase the number of guest worker visas, both for low-skilled and high-skilled workers, to satisfy corporate demands.

The plan was supposed to illustrate President Trump’s reversal on immigration, but the commander-in-chief is reportedly not a fan of it. According to McClatchy, Trump thought Kushner’s plan failed to adequately address illegal immigration and wants a stronger plan. A source told McClatchy the new plan is “pro-worker” and is “in the opposite direction of immigration increases.” The president has also pushed immigration patriot Stephen Miller to take a greater role in the negotiations, much to Kushner’s chagrin. [Trump picks Miller, setting up potential clash with Kushner on immigration, by Franco Ordonez, McClatchyDC, April 9, 2019]

Coupled with the shake-up at Homeland Security and the strong possibility Kris Kobach will enter the administration, and it looks It looks like immigration patriots may be able to support Trump once again.

The RAISE Act reintroduction is the most positive immigration action since Trump’s national emergency declaration. It is exactly what congressional Republicans should push. It’s time to debate America First immigration and expose Democratic insanity. This bill will do exactly that.