If only Mo Brooks had been nominated.

If the victory of Dave Brat over Eric Cantor was immigration patriotism’s biggest victory to date, the squeaker victory of Doug Jones over Roy Moore in the Alabama Senate is the Main Stream Media’s biggest victory since Donald Trump’s election. The MSM successfully created a fake issue to discredit Judge Moore, painting him not just as an extremist but as a “pedophile” based on absolutely no evidence. They provided cover for Leftist Doug Jones, allowing the Democrat nominee to pose as a moderate in conservative Alabama. And most importantly, they successfully broke up the white vote just enough that in the racial headcount that represent Southern (and increasingly American) elections, the usual monolithic black turnout was able to deliver the victory to Jones.

Ultimately, however, the Republican Establishment is to blame for Moore’s defeat. Rather than defending their candidate, they ran for cover following the early MSM attacks, thus emboldening the Democrats and encouraging them to pour in money and resources. A united front from day one would have prevented this from even being a contest. They have completely failed to learn the lesson of the 2016 campaign: courage Trumps cowardice.

Of course, a low-energy Roy Moore effort must also be faulted. President Trump ended the 2016 campaign with an almost inhuman feat of endurance, attending rally after rally in several states on the last day of the campaign. In contrast, Moore seemed not to campaign at all, actually leaving the state in the final days in order to visit his alma mater. [Where Roy Moore Has Gone In The Final Days Of The Alabama Special Election, by Benjamin Wallace-Wells, The New Yorker, December 12, 2017] He relied on subordinates who were easily outmatched on network television. [Roy Moore Spokesman Goes Blank After Jake Tapper Schools Him On The Constitution, by Carla Herreria, HuffingtonPost, December 12, 2017] And the Moore campaign constantly blundered from trap to trap, getting involved in an absurd controversy about having a “Jewish lawyer” on the last day of the campaign. [Comment about Jews by Roy Moore’s wife sparks new ridicule, by Kim Chandler, Associated Press, December 12, 2017]

This is especially unforgiveable given the available lines of attack against the Democrat nominee. On the very last day of the campaign, it was revealed Doug Jones was being backed to the tune of more than four million dollars by a super PAC aligned with the hated Democratic leadership [Secret super PAC backing Jones in Alabama exposed, by Gabriel Debenedetti, Politico, December 11, 2017]. Doug Jones outspent Roy Moore by an astonishing estimated ten-to-one margin [Alabama Preview: Turnout Will Win It for Moore or Jones, But Republicans Will Have a Headache Either Way, by Ed Kilgore, New York, December 11, 2017].  Moore could have turned this to his advantage, weaponizing Nancy Pelosi in the same way Karen Handel successfully did in an election in Georgia’s Sixth District against Jon Ossoff. Indeed, Moore could have been doing this the entire campaign.

Yet despite all of this incompetence, all of this apathy, and all of these mistakes, Moore came agonizingly close to winning—with practically the entire world against him.

But to say the Republican Establishment should have fought for their candidate from the beginning is to essentially say the Republican Establishment should act differently than how it have always acted.  The GOP leadership didn’t want President Trump to win. There’s no reason to believe it ever wanted Moore to win—even if, with incredible irresponsibility. that meant losing its Senate majority. 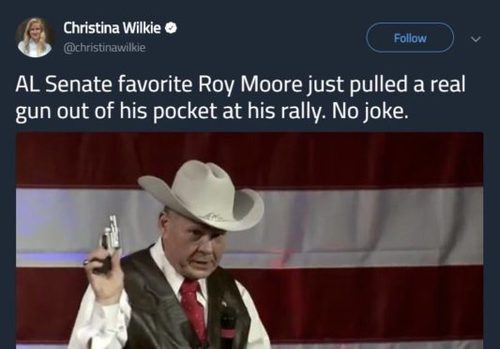 “Populists” themselves also deserve some criticism, as “populism” has been divorced from any substantive agenda. Roy Moore talked about God, wore a cowboy hat, flashed a gun at a campaign rally, and rode a horse to go vote. Amusing as such antics are, it would have been better to have had a candidate who knew what DACA was. [Roy Moore, leading candidate in Alabama Senate race, doesn’t know what DACA is, by Philip Wegmann, Washington Examiner, September 1, 2017] While Donald Trump was often criticized for being “simplistic” compared to his opponent, it was actually candidate Trump who talked more about concrete issues during the presidential race compared to Hillary Clinton, who actually ran very few ads talking about policy.  [Study: Hillary Clinton’s TV ads were almost entirely policy-free, by Jeff Stein, Vox, March 9, 2017]

If Moore had actually brought election back to policy, he would have won. According to the exit polls, fifty percent of voters wanted the Senate to be controlled by the Republican Party. A majority said Dough Jones does not share their values. And a majority also said abortion should be illegal in most or all cases. [Decision 2017 Alabama Results, NBC News, December 12, 2017]

Nonetheless, while Doug Jones (quietly) accepted money and help from Democrats around the country, Moore squandered much of his time and energy attacking Mitch McConnell instead of making the election about national issues.

For immigration patriots, the immediate consequences are ominous. Jones will be a reliable vote for an Amnesty/Immigration surge. Immigration patriot Jeff Sessions’s seat was given away so he could be Attorney General, where he has already run afoul of his chief for failing to stymie the farcical “Russia” investigation and failing to take investigate the alleged crimes of Hillary Clinton, which means he may well lose his position there. As Donald Trump himself predicted, the Patriotic Immigration Reform agenda could be stymied after this Democratic victory. [Trump: ‘If Alabama Elects Liberal Dem Doug Jones’ Pro-American Immigration Agenda ‘Will Be Stopped Cold,’ by John Binder, Breitbart, December 10, 2017].

But the deeper question: not what will happen to the Patriotic immigration Reform agenda going forward—but why nothing has happened already.

The only thing the “united Republican government” has to show for it is progress on a tax bill which no one even wants. There has been no movement on English as a national language, mandatory E-Verify, and taxing remittances to pay for the border wall, to name three easy legislative items.

Like Moore’s campaign, Trump’s “populism” in office has been largely stylistic. Twitter attacks on the media and the Democrats are amusing, but they do nothing to build the president’s coalition. Instead, they simply infuriate his enemies. Exit polls showed more people strongly disapproved of President Trump than strongly approved—a dangerous sign in Alabama.

It’s time for a change. The initial Republican Establishment reaction to this defeat, as was the case following President Obama’s 2012 re-election, will be to cave on DACA and try to pass an Amnesty over Christmas in the misguided hope that this will get the MSM/Democrats to lessen their hostility. But the MSM/Democrats will not be satisfied until President Trump is impeached and removed from office.

Once again, as after 2012, Immigration Patriots will be in the position of saving the Republican Party from itself. Any attempt at Amnesty must be firmly resisted. Instead, the Republican Party should shift to a substantive, rather than a simply stylistic, populist agenda. Infrastructure, popular immigration control measures, English as the Official Language and other popular programs could be pushed for political advantage. Paul Ryan’s wonkish Entitlement cuts should be avoided. The GOP needs to do what Moore never did—by forcing the Democrats into up or down votes on a series of popular items.

In crisis, there is opportunity. Moore’s defeat should galvanize the GOP (GAP) to steer a new course from its disastrous legislative effort thus far.

And while President Trump’s initial instinct may be to point (not unreasonably) to write-in saboteurs, he should also see this as opportunity to break away from his current rut and retake the offensive—not just on social networking, but on policy.

In Virginia, New Jersey, and now Alabama, it’s not that President Trump’s platform was tried and found wanting—it’s that it was ignored and never tried.

If the GOP wants to have any chance at keeping its majority, it needs to start reactivating its working-class National Conservative coalition with substance—not just a cliched style.

After all, George W. Bush used to wear a cowboy hat too.