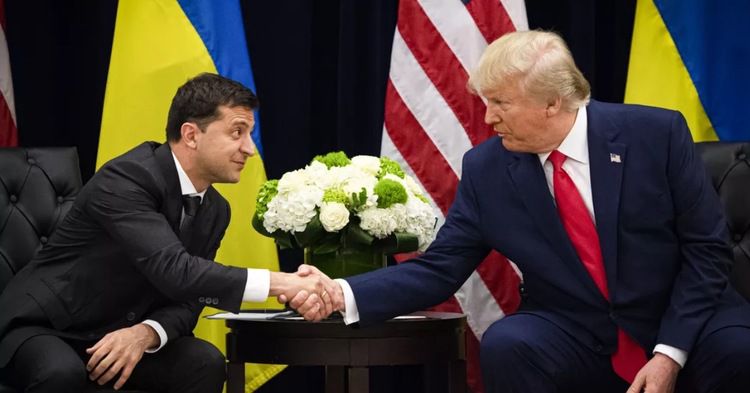 Patrick J. Buchanan: When Did Ukraine Become a 'Critical Ally'?

"What clearly concerned both witnesses wasn't simply the abuse of power by the President, but the harm it inflicted on Ukraine, a critical ally, under constant assault by Russian forces."

"'Even as we sit here today, the Russians are attacking Ukrainian soldiers in their own country, and have been for four years,' Taylor said. 'I saw this on the front line last week; the day I was there a Ukrainian soldier was killed and four more wounded.'"

Kent compared Ukrainian resistance to Russia's intervention on the side of the Donbass secessionists to "our own Minutemen in 1776."

"More than 13,000 Ukrainians have died on Ukrainian soil defending their territorial integrity and sovereignty from Russian aggression. ... American support in Ukraine's own de facto war of independence has been critical."

"The American colonies may not have prevailed against British imperial might without help from transatlantic friends after 1776. In an echo of Lafayette's organized assistance to General George Washington's army and Admiral John Paul Jones' navy, Congress has generously appropriated over $1.5 billion over the past five years in desperately needed train and equip security assistance to Ukraine..."

"Similar to von Steuben training colonials at Valley Forge, U.S. and NATO allied trainers develop the skills of Ukrainian units at Yavoriv near the Polish border, and elsewhere. They help rewrite military education for Ukraine's next generation, as von Steuben did for America's first."

"One would think, listening to this," writes Barbara Boland, the American Conservative columnist, "that the U.S. had always provided arms to Ukraine, and that Ukraine has relied on this aid for years. But this is untrue and the Washington blob knows this."

Indeed, Ukraine has never been a NATO ally or a "critical ally."

Three decades ago, George H.W. Bush implored Ukraine not to set out on a course of "suicidal nationalism" by declaring independence from the Russian Federation. Despite constant pressure from Sen. John McCain and our neocons to bring Ukraine into NATO, wiser heads on both sides of the Atlantic rejected the idea.

Why? Because the "territorial integrity and sovereignty" of Ukraine is not now and has never been a vital interest of ours that would justify a U.S. war with a nuclear-armed Russia.

Instead, it was the avoidance of such a war that was the vital interest that nine U.S. presidents, from Truman to Bush I, secured, despite such provocations as the crushing of the Hungarian Revolution in 1956 and the building of the Berlin Wall.

In February 2014, the elected pro-Russian government of Viktor Yanukovych was overthrown by U.S.-backed protesters in Maidan Square, cheered on by McCain. This was direct U.S. intervention in the internal affairs of Ukraine. Victoria Nuland of the State Department conceded that we had dumped billions into Ukraine to reorient its regime to the West.

To Vladimir Putin, the Kyiv coup meant the loss of Russia's historic Black Sea naval base at Sebastopol in Crimea. Rather than let that happen, Putin effected an uprising, Crimea's secession from Ukraine, and the annexation by Russia. In eastern Ukraine, the pro-Russian Donbass rose up in rebellion against the pro-NATO regime in Kyiv.

Civil war broke out. We backed the new regime. Russia backed the rebels. And five years later, the war goes on. Why is this our fight?

During the Obama years, major lethal aid was denied to Ukraine.

The White House reasoned that arming Ukraine would lead to an escalation of the war in the east, greater Russian intervention, defeat for Kyiv, and calls for the U.S. to intervene militarily, risking a war with Russia.

Not until Trump became president did lethal aid begin flowing to Ukraine, including Javelin anti-tank missiles.

So where are we?

Despite dramatic depictions of Ukraine as our embattled ally, Ukraine has never been an ally. We are not now nor have we ever been obligated to fight for its sovereignty or territorial integrity. Efforts to bring Ukraine, Moldova and Georgia into NATO have been repeatedly rebuffed in the United States and by our European NATO allies.

Kent and Taylor are honorable men. But they are career diplomats of the Department of State and veteran advocates of a foreign policy that sees Russia as an enduring aggressor and Ukraine as a fighting ally entitled to U.S. military assistance.

They have, in the old phrase, gone native. They champion the policies of yesterday and the embattled countries to which they are accredited and to whose causes they have become converted.

But Trump was elected to overturn the interventionist policies America has pursued since the century began. He was elected to end Cold War II with Russia, to reach a modus vivendi as Reagan did, and to extricate us from the endless wars into which Presidents Bush and Obama plunged the nation.