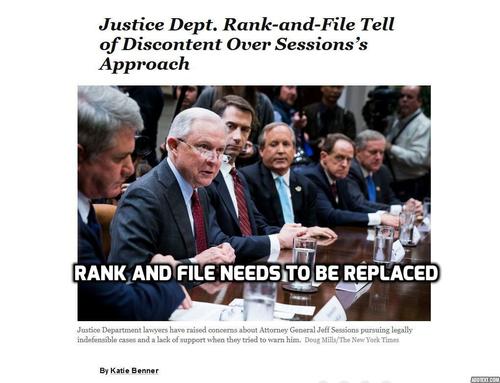 Just when I am completely satisfied with my distaste and discomfiture with Attorney General Sessions, whom I’ve called Deep State Jeff, and also Sleepy Jeff, there goes the Lying Press to try and pull me back from replacing Jefferson Beauregard Sessions III. To no surprise, the Newspaper of Record is telling me that the Deep State is active against little old Jeff. I for one can confirm that the bureaucrats in the Department of Justice (DOJ), or at least many of them, don’t like Sessions and they are openly ignoring his orders. Just ask United States Attorney Alex Tse.

Tse has been openly defying Attorney General Sessions, openly ignoring orders to prosecute classes of immigration violations and protecting his close political ally, Mayor Libby Schaaf from criminal prosecution for aiding illegal aliens to remain in the United States by warning them of imminent arrests by U.S. Immigration and Customs Enforcement (ICE). Sleepy Jeff has done nothing about it, so it is no surprise that the Resistance in the DOJ headquarters is leaking to the NYT about their contempt for the Attorney General.

During his 20 months in office, Attorney General Jeff Sessions has swept in perhaps the most dramatic political shift in memory at the Justice Department, from the civil rights-centered agenda of the Obama era to one that favors his hard-line conservative views on immigration, civil rights and social issues.

Now, discontent and infighting have taken hold at the Justice Department, in part because Mr. Sessions was so determined to carry out that transformation that he ignored dissent, at times putting the Trump administration on track to lose in court and prompting high-level departures, according to interviews over several months with two dozen current and former career department lawyers who worked under Mr. Sessions. Most asked not to be named for fear of retribution.

And the article goes straight to the case of the sanctuary cities. All recipients of Federal funds are prohibited from preventing their employees from communicating with the Federal government regarding illegal aliens, so the case against sanctuary cities is open and shut. Additionally, Title 8 United States Code Section 1324. Bringing and Harboring Certain Aliens, prohibits anyone from aiding or abetting illegal aliens to enter or remain. However, a Deep State operative was apparently ignorant of the law, and embarrassed himself before the Attorney General.

In one instance, Mr. Sessions directly questioned a career lawyer, Stephen Buckingham, who was asked to find ways to file a lawsuit to crack down on sanctuary laws protecting undocumented immigrants. Mr. Buckingham, who had worked at the Justice Department for about a decade, wrote in a brief that he could find no legal grounds for such a case.

Reminding Mr. Buckingham of the attorney general’s bona fides as an immigration hard-liner, Mr. Sessions asked him to come to a different conclusion, according to three people who worked alongside Mr. Buckingham in the federal programs division and were briefed on the exchange.

To Mr. Buckingham’s colleagues, the episode was an example of Mr. Sessions stifling dissent and opening the department to losses in court.

Mr. Buckingham resigned a few months later, and Mr. Sessions got his lawsuit. A federal judge dismissed most of the case, and the department has appealed. Both Mr. Buckingham and Ms. Flores declined to comment on the episode.

The reporter makes much of the initial lower court loss in the case, but remember, the Supreme Court upheld the Muslim Ban that the lower courts overturned. So some bureaucrat obstructing the enforcement of laws against States, counties, and cities aiding illegal aliens is of no importance, other than exposing many in the bureaucracy as partisan political players.

Again, this reminds us that personnel is policy. Attorney General Sessions does not appear to understand that as exemplified by his failure to appoint his own man as an Acting United States Attorney for the Northern District of California. Right now there is an Obama appointee as United States Marshal for the Northern District of California and a radical San Francisco Democrat in as United States Attorney. All thanks to Sessions, who is either a deep state operative himself or just Sleepy Jeff meandering his way unaware that Deep State operatives like Stephen Buckingham and Alex Tse are working against him. That is why President Donald J. Trump said he doesn’t have an Attorney General. Sleepy Jeff seems unaware that those in the Deep State are working against him and his policies.