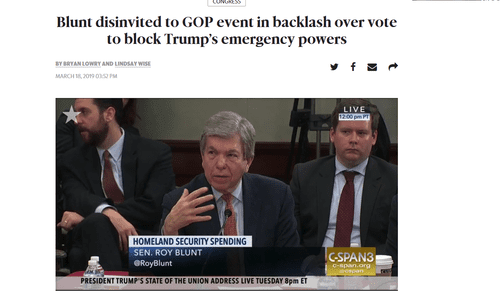 One of the frustrations of President Donald Trump's most passionate supporters is that they have been excluded from the White House, while the president's GOP enemies have been welcomed in. Personnel is policy and many of the failures of the Trump White House can be explained by the fact that he is surrounded by avowed enemies who consciously seek to thwart him. One suspects a method they use to control the president is feeding him selective poll data.

Thus, President Trump recently bragged about his high approval ratings among both the general public and Republicans. Unfortunately, the former comes from Rasmussen, which isn't very reliable, and the latter appears to have come from the Conservative Political Action Conference (CPAC) straw poll. [Where Trump’s two new favorite poll results came from. by Philip Bump, Washington Post, March 18, 2019].

Yet no one should assume that the Republican Party as a whole is turning on the president, nor should they underestimate Trump's support among the GOP grassroots. Many of the passionate online activists are defecting to Andrew Yang, but the rank and file GOP members still support the president, even over their own elected officials.

President Trump's approval among Republicans may not be 93 percent, but it's still high enough to intimidate any Republicans who are up for re-election.

It is no coincidence that recent polls show that Trump’s approval rating among Republican voters is also approaching nine out of ten. (Eighty-nine per cent in the latest Economist/YouGov survey; eighty-six per cent in a recent Monmouth University poll.) Confronted with figures like these, most Republican politicians are running as scared as ever from anything that smacks of criticism of Trump—especially those who are up for reelection next year...

Of the twelve Republican senators who defied Trump, just one—Susan Collins, of Maine—is up for reelection next year. Alexander is retiring. The other ten—Roy Blunt, Mike Lee, Jerry Moran, Lisa Murkowski, Rob Portman, Mitt Romney, Marco Rubio, Pat Toomey, Rand Paul, and Roger Wicker—aren’t up until 2022 or 2024. By then, Trump might well be out of office. Even if he isn’t, the dissidents will have had plenty of time to grovel their way back into his good graces.

[No, The Republican Party Is Not Turning On Donald Trump, by John Cassidy, The New Yorker, March 15, 2019]

Senator Roy Blunt of Missouri is among those who was just informed in no uncertain terms that GOP voters stand with Trump, not him.

U.S. Sen. Roy Blunt has been disinvited from a local GOP gathering in Christian County, Missouri, next month amid a backlash over his vote to block President Donald Trump’s use of emergency powers to build a border wall...

“I am so disappointed in you now that I can hardly speak,” wrote Wanda Martens, a member of the Christian County Republican Central Committee, in an email to Blunt’s office. “Why could you not support my president in the emergency declaration? President Trump tried every available means to work the Senate to resolve the border issue and build the much needed wall. He is well within his presidential powers to do this.”

Martens serves as the local party committee’s events chair. She told the senator in her email, which was obtained by The Kansas City Star, that she did not want to see him when the local party holds its Lincoln/Trump Day Dinner on April 6 in Ozark, Missouri, one of the most conservative areas in the state.

State and local Republican groups traditionally hold annual Lincoln Day events, but the event in Ozark includes Trump in the name and places a drawing of the president’s face alongside Lincoln’s on the invitation.

“Please don’t try to tell me that I don’t understand. I understand completely,” Martens wrote. “I hate it when someone calls you the establishment and that you are part of the swamp, but maybe they were right.”

President Trump's administration is in trouble. Yet he still has the GOP base and a passionate following, just waiting for him to lead. He is by no means finished. As stated before, he doesn't even need the emergency declaration, he can start building the wall right now. But he needs to act, not just tweet.