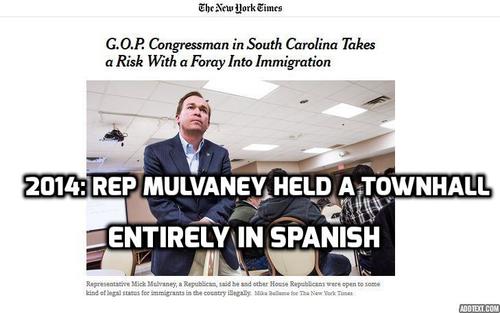 What To Think Of Trump “Acting” Chief Of Staff Mick Mulvaney?

Mick Mulvaney is set to take over as President Trump’s “Acting” Chief of Staff. Immigration patriots should be skeptical of this development.

Mulvaney has proven himself as a reliable ally to the President as his director of the Office of Management and Budget and interim chief of the Consumer Protection Bureau. While most Washington insiders failed to last long within the Trump White House, Mulvaney has stuck with the administration since the beginning and has earned the president’s trust.

But the new chief of staff has a spotty record on immigration that should concern true patriots. In 2014, the then-South Carolina congressman told his constituents—in Spanish—that he supports amnesty for illegal immigrants. [Mulvaney once touted amnesty for illegal immigrants — in Spanish, by Robert Donachie, Washington Examiner, December 17, 2018] That same year, Mulvaney was working with Paul Ryan and Democrats to craft amnesty legislation to pass through the House. [Mick Mulvaney’s Summer Of Apostasy, by Jonathan Strong, Breitbart, June 8, 2014]

In 2015, Mulvaney criticized Iowa Rep. Steve King’s immigration rhetoric for allegedly pushing Hispanic voters away from the GOP and urged his party to make a deal on amnesty.

Mulvaney was no supporter of Trump during the 2016 campaign. He called the future president a “terrible human being” and said Trump should be disqualified from office in the weeks leading up to the 2016 election. [Mick Mulvaney in October 2016: Trump would be disqualified from office in an 'ordinary universe', by Andrew Kaczynski, CNN, December 17, 2018]

At the present moment, Mulvaney is working with House Speaker Ryan and outgoing chief of staff John Kelly to reward their co-ethnics in Ireland with an increase in work permits and amnesty for Irish illegal immigrants. [Retiring Paul Ryan Pushes Stealth Outsourcing, Amnesty for Irish Lobbies, by Neil Munro, Breitbart, December 8, 2018]

These are all troubling signs for an incoming chief of staff. However, there are upsides to Mulvaney.

Paradoxically, Mulvaney had a decent NumbersUSA grade when he was a congressman. This is likely due to his membership in the conservative House Freedom Caucus, which has always maintained a hard-line on immigration and rejected amnesty. This demonstrates he’s willing to be pragmatic and get on board with a good immigration agenda, a trait he has displayed while working in the White House—barring the Irish amnesty proposal.

He’s also much better than Chris Christie or Jared Kushner, two highly-touted prospects for the job right before Mulvaney was picked.

Besides his spotty immigration record, Mulvaney’s other issue is that he’s primarily concerned with pushing the failed Paul Ryan agenda through rather than Trump’s America First priorities. The president already went through this at the beginning of his term with the disastrous attempt to repeal Obamacare.

Trump can’t afford to waste his limited political capital on these pointless fights again. He needs to double-down on what got him elected. Hopefully, Mulvaney got the memo on that.