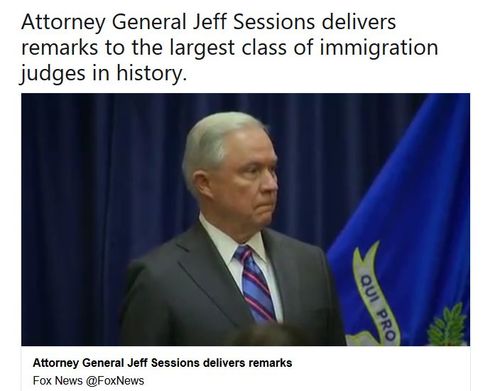 Jeff Sessions Speaks To Largest Class Of Immigration Judges In History: "The American People Have Spoken"

Below, Federale is unsatisfied with Jeff Sessions's performance as AG, but I keep thinking of how much Sessions isn't Eric Holder or Thomas Perez. Here's Sessions's speech to "Largest Class of Immigration Judges in History for the Executive Office for Immigration Review (EOIR)."

I will reproduce the whole thing below:

Remarks as prepared for delivery

Thank you, James, for that kind introduction, and thank you for your years of service to the Department as a SAUSA, at Main Justice, and now here at EOIR.  James has been doing a fabulous job.

Counting you, along with our existing judges, we are currently have the most active immigration judges in history.

But we won’t stop there—we will add even more by the end of this calendar year, with a goal of seeing a 50 percent increase in the number of judges since the beginning of the Trump administration.

I am grateful to the President, to OMB, and to Senator Shelby, Senator Moran, Representative Frelinghuysen, and Representative Culberson for making this historic increase in immigration judges possible.

Immigration judges are critical to ensuring that the Department of Justice carries out its responsibilities under the INA.

You have an obligation to decide cases efficiently and to keep our federal laws functioning effectively, fairly, and consistently.

And, as the statute states, Immigration Judges conduct designated proceedings “subject to such supervision and shall perform such duties as the Attorney General shall prescribe”.

This last provision gives me responsibility to ensure that our immigration system operates in an effective and efficient manner consistent with law enacted by Congress.  Many in this country take a different view. They object to any enforcement that works. They evidence an open borders philosophy.

Let me say this clearly: it is perfectly legitimate, moral, and decent for a nation to have a legal system of immigration and to enforce the system it adopts.  No great and prosperous nation can have both a generous welfare system and open borders. Such a policy is both radical and dangerous. It must be rejected out of hand. Open borders is directly contrary to the INA, which governs our work. The INA is not perfect, but it plainly lays out a rational scheme for immigration that tells our officers and judges who is to be admitted, how many and under what circumstances.

Good lawyers, using all of their talents and skill, work every day—like water seeping through an earthen dam—to get around the plain words of the INA to advance their clients’ interests. Theirs is not the duty to uphold the integrity of the act. That is our most serious duty.

Of course, we must always respect the rights of aliens who come before our courts. Just as we defend immigrant legal rights we reject unjustified and sometimes blatantly fake claims. The law is never serviced when deceit is rewarded so that the fundamental principles of the law are defeated.

The American people are good and just.  They rightly want a lawful system they can be proud of.  They believe that persons who want to come here should file their claim and wait their turn.  They believe that we should not encourage them to enter our country in a criminal manner.  And, as I think you all would agree, the INA was enacted to make those principles a reality.

The Department of Justice is working hard to uphold those principles.  And so are our U.S. Attorneys.  When I was a U.S. Attorney, I pushed for maximum production from my Assistants and our staff.  And now as Attorney General, my team and I are doing the same thing—encouraging our USAOs to achieve the highest levels of excellence.

As you take on this critically important role, I hope that you will be imaginative and inventive in order to manage a high-volume caseload.  I do not apologize for expecting you to perform, at a high level, efficiently and effectively.

Your role requires great legal skill.  Many of the cases present complex legal issues, but like anyone acting as a judge, you must manage your docket and support staff well.  Cases must be moved to conclusion.

Claimants must meet necessary legal standards before relief is given. These principles and the large numbers of cases present a great challenge. That’s why we need more judges.

After great study, I have taken a number of actions to make the system work as it was intended—and better.

Earlier this year, the department of Homeland Security announced that it would seek to refer 100 percent of illegal border crossers to the Department of justice for criminal prosecution in Federal courts.

Our U.S. Attorneys are prosecuting over 90 percent of those cases referred to us. It’s a two to threefold increase – and it has some deterrent effect. This is the “zero tolerance” policy you have heard about. You don’t get to enter the border unlawfully, between ports of entry, and place our CBP officers at risk without consequences.

Of course, our goal is not to just prosecute more but to deter and end illegality. To that end we are resolutely committed.

If someone is smuggling illegal aliens across our Southwest border, then we will prosecute them.  Period.

Of course, the problem of illegal immigration has only been compounded by issues surrounding the asylum process.

The asylum system has been abused for years to the detriment of the rule of law, sound public policy, and public safety—and to the detriment of people with just claims.  Saying a few simple words—claiming a fear of return—has transformed a straightforward arrest for illegal entry and immediate return to too often into a prolonged legal process, where an alien may be released from custody into the United States and possibly never show up for an immigration hearing.

This is a large part of what has been accurately called “catch and release.”  Our system was not designed to handle thousands of new asylum claims every month from individuals who illegally flood across the border.  But that is what has been happening, and it has overwhelmed the system.

Beginning in 2009, more and more aliens who passed an initial USCIS credible fear review were released from custody into the United States pending a full hearing.  Powerful incentives were created for aliens to come here illegally and claim a fear of return.  In effect, word spread that by asserting this fear, they could remain in the United States one way or the other.

Far too often, that rumor proved to be true.

The results were entirely predictable.  The number of illegal entrants has surged. Credible fear claims have skyrocketed, and the percentage of asylum claims found meritorious by our judges declined.

The reason for the decline is because the vast majority of the current asylum claims are not valid under the law.  For the last five years, only 20 percent of claims have been found to be meritorious after a hearing before an Immigration Judge.

In addition, roughly fifteen percent are found invalid by USCIS as a part of their initial credible fear screening.

Further illustrating this point, in 2009, DHS conducted more than 5,000 credible fear reviews.  By 2016, only seven years later, that number had increased to 94,000.  The number of these aliens placed in immigration court proceedings went from fewer than 4,000 to more than 73,000 by 2016—nearly a 19-fold increase—overwhelming the system and leaving legitimate claims buried.

Now we all know that many of those crossing our border illegally want a better life and many are leaving difficult situations.

And we understand all are due proper respect and the proper legal process.  But we cannot abandon legal discipline and sound legal concepts.

Under the INA, asylum is available for those who leave their home country because of past persecution or a well-founded fear of future persecution on account of race, religion, nationality, membership in a particular social group, or political opinion.  Asylum was never meant to provide escape from all the problems—even serious problems—that people face every day all over the world.

That is why earlier this year, I issued a decision that restores sound principles of asylum and long standing principles of immigration law.

We acted carefully and prudently—not hastily.  In my judgment, this is a correct interpretation of the law.  It restores the original intent and purpose of the INA, and it will be your duty to carry out this ruling. In fact it restores the way the law was initially enforced for decades.

But it isn’t the only thing we have done to provide clarity to the process. I have also issued decisions on other topics—in one case, clarifying that immigration judges and the Board lack the authority to “administratively close” cases under the law; in another, clarifying the “good cause” standard for a continuance for collateral matters in immigration court; and, vacating a mooted Board decision that injected confusion as to the requirement to hold a merits hearing in certain cases. And there will be more still to come.

These decisions will provide more clarity for you. They will help you to rule consistently and fairly.

And it is more important than ever that you do just that.

This is a great nation—the greatest in the history of the world.  It is no surprise that people want to come here.  But they must do so according to law, because it is the supremacy of that law that made this country so great in the first place.

And as members of the Executive Branch, it is our duty to “take care that the laws be faithfully executed.” When we depart from the law and create nebulous legal standards out of a sense of sympathy for the personal circumstances of a respondent in our immigration courts, we do violence to the rule of law and constitutional fabric that bind this great nation. Your job is to apply the law—even in tough cases.

As we work to restore rule of law in our immigration system, we will send a clear message to the world that the lawless practices of the past are over. The world will know what our rules are, and great numbers will no longer undertake this dangerous journey.

The number of illegal aliens and the number of baseless claims will fall.  A virtuous cycle will be created, rather than a vicious cycle of expanding illegality.