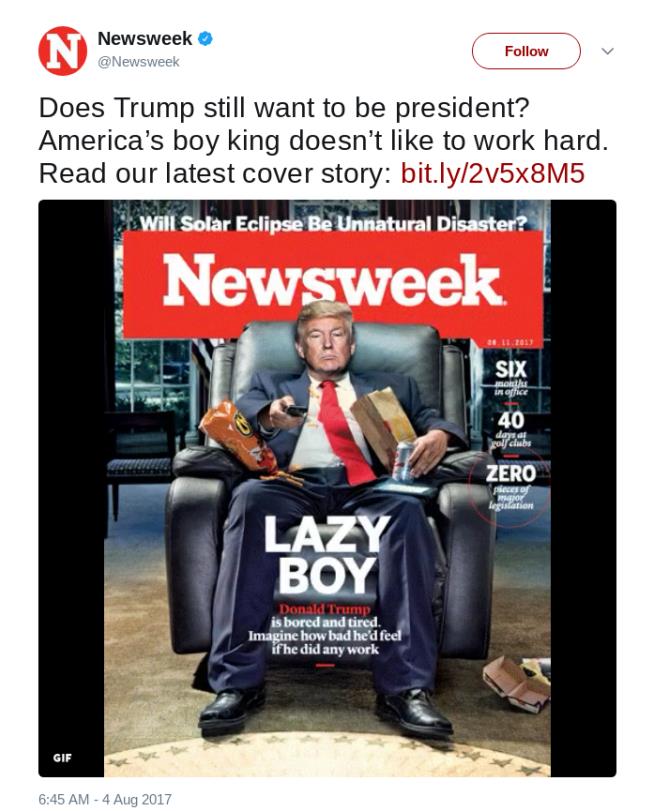 The current issue of Newsweek (yes, it's still in business!) has a picture of President Trump sitting in a recliner, with snacks and an iPad in his lap, pointing his TV remote at the viewer, blazoned with the headline, "Lazy Boy."

Last week, the president joined Sens. Tom Cotton (R-Ark.) and David Perdue (R-Ga.) to announce legislation that would make seminal changes to our immigration laws for the first time in nearly half a century, profoundly affecting the entire country.

The media have chosen not to cover the RAISE Act (Reforming American Immigration for Strong Employment). This bill is their worst nightmare. 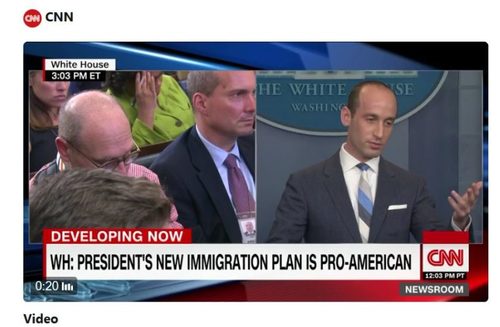 Instead of admitting immigrants on the basis of often specious "family" ties, the bill would finally allow us to choose the immigrants we want, based on merit, with points granted for skills, English proficiency, advanced degrees, actual job offers and so on.

Most Americans have no idea that we have zero say about the vast majority of immigrants pouring into our country. Two-thirds of all legal immigrants get in not because we want them—or even because Mark Zuckerberg wants them—but under idiotic "family reunification" laws.

The most important provision of the RAISE Act would define "family" the way most Americans think of it: your spouse and minor children.

Unfortunately, that's not how the Third World thinks of "family." In tribal societies, "family" means the whole extended clan—adult siblings, elderly parents and brothers-in-law, plus all their adult siblings and elderly parents, and so on, ad infinitum.

Entire tribes of immigrants are able to bully their way in and, as legal immigrants, are immediately eligible for a whole panoply of government benefits. Suddenly, there's no money left in the Social Security Trust Fund, and Speaker Paul Ryan is telling Americans they're going to have to cut back.

At some point, American businesses are going to have to be told they can't keep bringing in cheap foreign labor, changing the country and offloading the costs onto the taxpayer. But that's not this discussion. Business owners want cheap workers—not the disabled parents of cheap workers.

In a sane world, merely introducing such an important bill—with the imprimatur of a president elected on his immigration stance—would force the media to finally discuss the subject they have been deliberately hiding from the public.

Has Trump personally endorsed any other legislation like this? He harangued congressional Republicans on Twitter to pass some Obamacare replacement, but he never endorsed a specific bill.

But, you see, there's a reason the media don't want to talk about immigration.

With a full public airing, Americans would finally understand why recent immigrants seem so different from earlier waves, why income inequality is approaching czarist Russia levels, why the suicide rate has skyrocketed among the working class, and why all our government benefits programs are headed toward bankruptcy.

So, naturally, the media refuse to mention it, except to accuse Miller of being a white nationalist for knowing hate-facts about the Emma Lazarus poem not being part of the original Statue of Liberty. (It's the Statue of Liberty, not Statute of Liberty, media.)

They ignore this bill so they can get on to the important business of Trump's tweets, who's up and who's down in the White House, and Russia, Russia, Russia.

According to my review of Nexis archives, there was only a single question about the RAISE Act on any of the Sunday morning shows: Chris Wallace's last question to his very important Republican guest. Unfortunately, his very important Republican guest was amnesty-supporting nitwit Sen. Thom Tillis of North Carolina, who sniped about Trump employing foreign guest workers at Mar-a-Lago.

However that may be, guest workers have absolutely nothing to do with the RAISE Act, which, as Miller heroically tried to explain to clueless reporters, concerns only green-card holders, i.e., lawful permanent residents—not guest workers, not illegal aliens and not a poem Scotch-taped onto Lady Liberty in 1903.

At least the media aren't deluded about the popularity of their position. Discussing immigration is a total loser for them. They know what they want is not supported by anyone.

Low-wage workers don't want hundreds of thousands of low-skilled immigrants being dumped on the country every year. Employers don't want the deadbeat cousins of their cheap workers. Americans on public assistance don't want foreigners competing with them for benefits. Boneheaded Scandinavian communities that welcomed refugees don't want to turn their entire town budgets over to various foreign tribes.

In a recent Numbers USA poll of voters in 10 swing states with vulnerable Democratic senators up for re-election next year, only 22 percent of respondents thought immigrants should be allowed by right to bring in "family" other than spouses and minor children.

Donald Trump was elected president, beating the smartest, most qualified woman in the world, by proposing to put Americans first on immigration. This bill makes good on that promise.

There's a reason the media won't discuss it. If Trump were smart, he'd talk about nothing else.