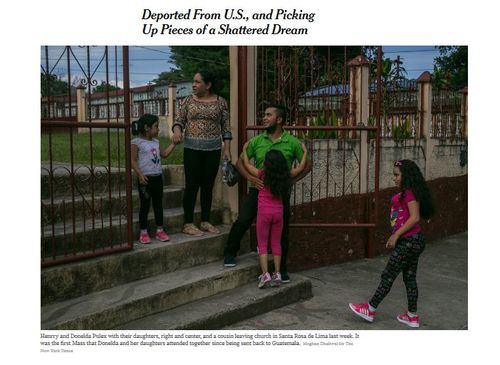 A deported illegal alien has exposed the current illegal immigration scam of bringing children when attempting to immigrate illegally to the United States.  The shocking thing is that the truth slipped by the editors at the New York Times.  The illegal alien, Donelda Pulex Castellanos admitted that every aspect of the current crisis is a fraud; she came here for economic reasons, her husband was not abusive, she brought her child because she thought that would win her catch-and-release, and the separation of children is an effective deterrent.

For most of the two months she was held in immigration detention centers in the United States, Donelda Pulex Castellanos feared she might never see her 6-year-old daughter again.

The two had been caught after unlawfully crossing the Mexican border and, a day later, were separated as part of President Trump’s effort to thwart illegal immigration. Ms. Pulex was locked up in Texas and her daughter, Marelyn Maydori, was sent to live in a foster home in Michigan.

Their ordeal — or at least the most difficult chapter of it — ended last week when the two were suddenly reunited moments before they were put on a plane and deported back to Guatemala.

First, they never thought they would be separated:

“It never occurred to us that we were going to be imprisoned and they were going to take my daughter,” Ms. Pulex, 35, said during an interview last week in Santa Rosa de Lima, a poor, rural municipality in southern Guatemala where she is from.

Next, there is no problem of wife beating:

On their arrival at a Guatemalan military base in the capital, Guatemala City, they were met by joyous relatives including Ms. Pulex’s husband, Henrry, and the couple’s elder daughter, Emily Gelita, 10.

It was all about bettering their lives economically:

The Pulexes are frank about their motivations for heading north: They thought they might have a chance of making more money, getting a better education for their daughters and generally improving their lives.

“We wanted to live there and leave behind everything bad about life in Guatemala,” Mr. Pulex explained…

Before they decided to migrate, Mr. Pulex drove a bus for work, and Ms. Pulex ran a store that sold food and household products out of the couple’s small house. But they weren’t quite making ends meet — and their thoughts turned to North America.

They planned on benefiting from catch-and-release, planning never to appear in court and were free in live in the United States.  This is what they were advised by Treason Bar attorneys, it isn’t over until the alien wins.  And the alien wins by endless delays, sabotage by Immigration Judges, and shameless baby waving.

Ms. Pulex said she never intended to evade the authorities. She and Marelyn planned to cross the American border in between legal entry points with the expectation that they would be immediately picked up by border guards and put into deportation proceedings.

But based on the experiences of others, she had assumed that they would be quickly released to await their day in court, which could take years considering the long backlogs.

Until the Trump administration began to separate families at the border, exceptions to criminal prosecutions of anyone crossing the border unlawfully were generally made for adults traveling with their minor children. Central Americans were familiar with this practice, and it became part of their planning…

The family had come up with a plan: Ms. Pulex and Marelyn would leave first, with the aid of a migrant smuggler, and try to make it to the home of a relative who was living with his family in Texas. Once the two were settled, Mr. Pulex would follow with Emily.

This explodes the current narrative in every detail.  There is no fear of crime, there is no fear of abuse, the aliens are not fleeing anything, just making a deliberate and calculated decision to exploit loopholes in American immigration law and policy.  Worse yet, is that they are supported by a seamless wall of lies by the press, Treason Bar, judges, and politicians.

And one kritarch in particular, Dana Sabraw, who now runs American immigration law, is now imposing every aspect of the scam that the Pulex’s planned upon at the request of the ACLU: catch-and-release, no deportations, and open borders for every illegal alien.

A federal judge temporarily barred the U.S. government on Monday from the rapid deportation of immigrant parents reunited with their children, while a court considers the impact on children’s rights to seek asylum.

The government is working to meet a court order to reunite around 2,550 children who were separated by U.S. immigration officials from their parents at the U.S.-Mexican border.

And this kritarch, among others, is just making up new policies out of whole cloth:

The American Civil Liberties Union said in court papers on Monday that, once reunited, immigrant parents who face deportation should have a week to decide if they want to leave their child in the United States to pursue asylum separately.

“A one-week stay is a reasonable and appropriate remedy to ensure that the unimaginable trauma these families have suffered does not turn even worse because parents made an uninformed decision about the fate of their child,” the rights group wrote…

In a related lawsuit filed on Monday in New York City, the Legal Aid Society sought a federal court order requiring U.S. immigration officials to give 48 hours advance notice of planned family reunifications, allowing parents a better chance to consult with lawyers about asylum or other options for their children.

There is nothing in immigration law about allowing illegal aliens a week or 48 hours advanced notice before the government takes lawful action to deport them.

And it is not about family separation, it is all about imposing a single kritarch’s preferred immigration policy, not deporting illegal aliens.

At Monday’s hearing in California, the judge pressed back on a suggestion by a government attorney that quick deportations aided reunifications by creating more room for families in detention.

“The idea this would slow or stop reunifications, that’s not an option,” said Sabraw. “If space is an issue, the government will make space.”

Sadly, the Department of Justice is not appealing any of the crazy decisions by Sabraw and other kritarchs.  Again, Sleepy Jeff is disappointing.  It is time to remove Jeff Sessions, he just does not have the strength of character to defend the law or the Constitution from the depredations of kritarchs.