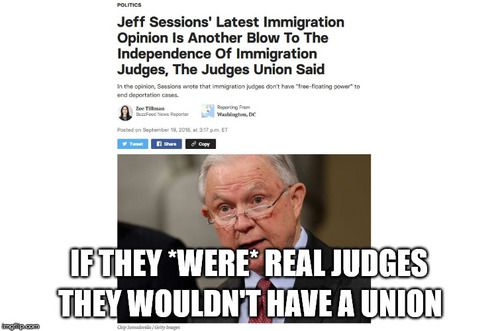 The functionaries  known as a "immigration judges" are employees of the Executive Office for Immigration Review (EOIR) which is part of the Department of Justice.

Jeff Sessions' Latest Immigration Opinion Is Another Blow To The Independence Of Immigration Judges, The Judges Union Said

WASHINGTON — A representative of the national union of immigration judges says a new decision by Attorney General Jeff Sessions about the authority of judges to dismiss immigration cases is part of a broader effort by Sessions to limit their independence.

In an opinion released Wednesday by the Justice Department, Sessions wrote that immigration judges do not have "free-floating power" to dismiss removal proceedings. Judges could dismiss a case if the Department of Homeland Security failed to meet its burden of proof, Sessions wrote, or if specific conditions spelled out in existing regulations were met. Sessions reversed an immigration judge's decision to terminate a removal case, finding it wasn't based on the law or regulations.

Judge Dana Marks, a representative of the National Association of Immigration Judges and an immigration judge in San Francisco, told BuzzFeed News in an email that some judges, including herself, already interpreted the law as Sessions did, but a "very reasonable legal argument to the contrary" could be made. She said the decision more broadly demonstrated the Trump administration's "political approach" to immigration courts.

The administration "persistently moves to limit Immigration Judges’ independence and to push them towards rapidly issuing orders of removal rather than engaging in creative problem solving and practical-based outcomes for the people who come before us," Marks wrote.[More]

The main thing you need to know about the EOIR, aside from the obvious fact that they're all Executive Branch employees, is that they operate under the same conditions as a parole board, in that everyone who comes before them is guilty.