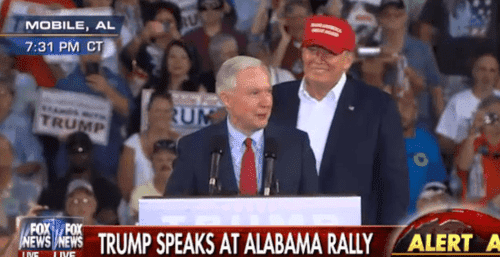 Above, then-Senator Jeff Sessions was an early supporter of candidate Trump.

The Hill reported Wednesday that the former attorney general is set to announce his candidacy for the Alabama Senate race. The deadline to file is Friday. It’s a crowded Republican field already, but Sessions is the biggest name and the most solid on immigration. [Sessions inches closer to announcing Alabama Senate bid, by Juliegrace Brufke and Al Weaver, The Hill, November 6, 2019]

A source told The Hill that Sessions “will come out forcefully in support of [President] Trump’s agenda while denouncing Democrats’ impeachment efforts.”

He will have $2.5 million cash on hand if he runs, a good war chest to start off with.

The frontrunner in the Alabama race is not good on immigration. As VDARE has reported, former college football coach Tommy Tuberville says businesses need cheap foreign labor and has hired immigration boosters for his campaign.

The big problem for Sessions is President Trump. Sessions endorsed the future president when no one else would and was a great attorney general. However, the president can’t get over Sessions’s recusal from the Russia investigation. Sources told The Hill that the White House would view Sessions’s run “extremely unfavorably.”

The former senator can’t expect a Trump endorsement in the primary, but he can at least hope Trump stays out of the race. Knowing Trump, there’s a good chance he could unleash a tweetstorm against Sessions and doom his candidacy.

Trump has forgiven Ken Cuccinelli, Lindsey Graham, and many other former Never Trumpers for their past offenses. It’s time he shows the same courtesy to an old loyalist.