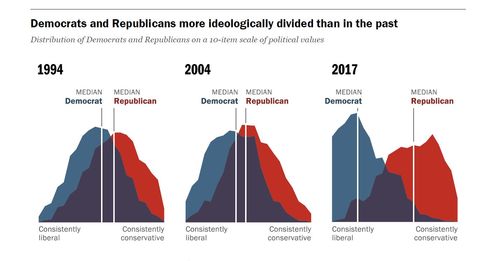 Source of chart above: The Partisan Divide on Political Values Grows Even Wider, October 5, 2017

Hamas and Israel clashed recently [700 rockets, 240 intercepts, 4 dead Israelis: Is the Iron Dome getting worse? By Sam Sokol, Jewish Telegraphic Agency, May 7, 2019] and, needless to say, the Trump Administration is backing Israel. GOP Big Brains think this is the way to win over Jewish voters (and donors), the so called “Jexit”. [Trump backers plan ‘Jexit’ rally to attract Jewish voters, by Debra Saunders, Las Vegas Review-Journal, May 6, 2019] Which is also why they are targeting anti-Israel Democrats like Ilhan Omar. But it probably won’t be as effective as they hope.

Jewish voters generally support the Democrats, apparently because of domestic issues. [Pro-Trump Republicans plan big-money play for Jewish vote in 2020, by Alex Isenstadt, Politico, April 7, 2019] But there are also signs that Leftist and younger Jews are increasingly less supportive of Israel.

In San Francisco, only a minority of young Jews believe that a “Jewish state” is important. [Vast numbers of progressive California Jews are disengaging from Israel, Survey Finds, by Judy Maltz, Haaretz, February 14, 2018] Most Jews still support Israel, but younger Jews are increasingly hostile towards Netanyahu’s long-lasting nationalist government. [As Israel turns 70, many young American Jews turn away, by Dox Waxman, The Conversation, May 3, 2018] This has been developing for some time: 2013 survey from Pew showed support for Israel among American Jews is inversely related to age. [Chapter 5: Connection With and Attitudes Toward Israel, Pew Research Center, October 1, 2013]

It’s long been embarrassingly obvious that Jewish groups like the Anti-Defamation League promote a double standard—nationalism for me, diversity for thee. But this hypocrisy is becoming increasingly untenable.

Benjamin Netanyahu recently said Israel is “the national state, not of all its citizens, but only of the Jewish people”. [Netanyahu says Israel is ‘nation-state of the Jewish people and them alone, NPR, March 11, 2019. Emphasis added] It’s currently impossible to imagine a contemporary American politician declaring America the national state only for whites (although this in fact what the 1790 Naturalization Act actually said). Yet it didn’t cost Netanyahu: he won yet another election over opponents who would be considered right-wing by European and American standards. The Week declared “there is functionally no Left left in Israel.”

VDARE Editor Peter Brimelow wrote in 1979 that the British elites saw in heroic breakaway white-ruled Rhodesia “what we were and might have been. And we hated us.” A similar process may be underway for American Jews—embarrassed by a frankly ethnonationalist, natalist, expansionist and confessional state.

In contrast, the Beltway Right whole-heartedly backs the Netanyahu government. Paradoxically, the GOP actually has a far more consistent commitment to Israeli nationalism than it does to American nationalism.

Thus the neocon website The Federalist recently published a remarkable article entitled “The Moral Case For Israel Annexing The West Bank—And Beyond,” in which “radical containment or expulsion” is advocated for the Palestinians in order to preserve the Jewish state [by Jason Hill, April 16, 2019]. Cuckservative Minicon Ben Shapiro advocated population transfers in 2003 (although he’s since supposedly disavowed it).

However, purely from the perspective of preserving an unchallengeable Jewish majority, the logic is sound. In Shapiro’s words in 2003, it’s an “ugly solution, but it is the only solution.” (VDARE.com’s Robert Locke had, needless to say, already raised this point).

Might American conservatives ever think this way about their own country? Conservatism Inc. adamantly insists not. Thus The Federalist recently denounced the “Alt Right” for “racist bile” and declared there is no connection between it and Respectable Right figures like Shapiro. [Why the Left can’t understand the Alt-Right, by David Marcus, March 29, 2019]

Few on the Dissident Right accept the term “Alt Right” today because it’s so smeared and so associated with specific individuals. But accepting it arguendo, Marcus is correct that it has no connection with Ben Shapiro. Shapiro, and most other Conservatism Inc. figures, believe American conservatism should be defined by a rejection of “identity politics”—except in the case of Israel. There, the GOP is firmly committed to blood and soil.

Thus, there’s not really a debate about whether the Republican is an ethnonationalist party—it already is. But for Israel.

But will the GOP ever be even a civic nationalist party for Americans?

Answer: a resounding Maybe. An emerging division among non-Jewish white Americans may force the GOP down this path.

The Sailer Strategy often discussed here at VDARE.com argued that the GOP needed to win a larger share of the white majority in order to remain competitive in national elections—essentially by reaching out to the white working class. President Trump won the White House in 2016 by ignoring Conservatism Inc. and, following what we’ve been writing about for years, by winning the Rust Belt.

However, it’s undeniable that there has been a dramatic shift leftward of progressive American whites on racial issues that predated President Trump—what Matthew Yglesias calls “The Great Awokening”. This is not simply the result of a flight by non-Leftist whites from the Democrats, although that is certainly a factor. The whites who remain within the Democrats are moving radically leftward, most likely because of social media and JournoFa agitation.

In contrast, despite Main Stream Media hysteria about “white nationalism,” there has been no equivalent radicalization process taking place among Republicans (President Trump’s current immigration policy, for example, is far to the left of progressive Democrat Barbara Jordan’s.) The “white nationalist” chimera is basically the result of more things being called “racist” by an increasingly manic media elite.

Thus a recent Pew survey shows 53 percent of Republicans believe that the country has gone far enough in granting equal rights to blacks, with a significant minority of 31 percent saying it has gone “too far” . [Race in America 2019, by Juliana Menasce Horowitz, Anna Brown, and Kiana Cox, Pew, April 9, 2019]

In contrast, almost two-thirds of white Democrats think the country has not done enough, with less than a third thinking it’s about right and only a tiny percentage thinking America has gone “too far.”

The Pew report also shows huge differences between white Democrats and white Republicans when it comes to explaining the problems of blacks. Among those who think being black hurts a person’s chance to succeed, large majorities of white Democrats blame racial discrimination, less access to good schools, and less access to high-paying jobs as the reasons. But fewer than a third of Republicans agree. Instead, they blame family instability, lack of good role models, and a lack of motivation to work hard.

This division will likely grow in the future. White Democrats’ radicalization will lead to increasing demands for race-driven policies such as “reparations,” racial quotas, and crackdowns on so-called “Hate Speech.” Yet each one of these demands will alienate white Republicans who think the country has already done enough, or even too much.

White Republicans aren’t “white nationalists” by any stretch—but they are truly fed up with Political Correctness.

Thus there are signs of a split between liberal American Jews and nationalist Israel. That split is likely to grow in the years ahead.

But there is already a massive split between Leftist and conservative American whites. Indeed, they are becoming two entirely separate peoples, incapable of even viewing the same event the same way (as the controversy over Covington Catholic showed).

This amounts to a Cold Civil War among American whites. Whites who feel they are under attack are more conservative while whites who feel embarrassed about their identity are more eager to undermine their own group for individual advantage and perceived moral superiority.

Already, this Cold Civil War is seeing violent skirmishes. America desperately needs immigration control, an end to Political Correctness, and at least some effort at building a common identity if the state is to hold together.

But instead, the incentives are in place for white Leftists and non-whites make radical and ultimately impossible demands, on the theory that current immigration policy will anyway eventually Elect A New (non-white) People, whom they will lead.

If the last few years have shown anything, it’s that predictions about the future should be taken with skepticism. But it seems obvious that more conflict, not consensus, is in white America’s future.

This is only going to get worse.