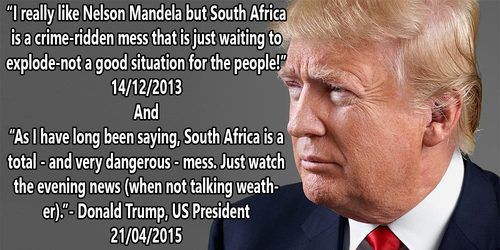 Trump On South Africa—Brimelow On Rhodesia 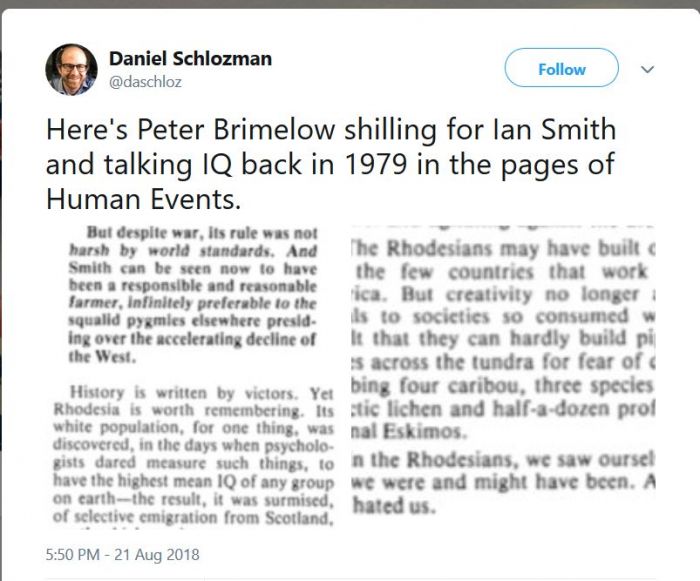 President Donald J. Trump has finally addresssed the plight of white farmers in South Africa, to the outrage of the Main Stream Media, which had NOT GIVEN PERMISSION for this story to be told. Which, along with the appearance of this friendly note on Twitter from academic Daniel Schlozman (who has clearly been scouring the databases for Brimelow badthink) prompted us to post this "Blast From The Past."

In 1979, Human Events published it with the note that it was “reprinted with permission from the Financial Post of Toronto, Ontario, Canada”  where a somewhat younger Peter Brimelow was living and working.

Brimelow's thesis has been proven over and over again by Mugabe and his successors. The late Sam Francis summed it up in 2002 under the heading The Zimbabwe Disaster: What Did We Expect?

The news from South Africa seems to be saying the same thing. And once again, what did they expect?

A few words for PC enforcers--not that we care what they think, but to avoid confusion. The reference to IQ compares the IQ of the white settler community of Rhodesia with other white countries, like the UK, Australia, and Canada. Also, the reference to "squalid pygmies" does not refer to actual pygmies, it refers to people like Jimmy Carter, Pierre Trudeau, and James Callaghan, all of them white, and even fairly tall.

Ian Smith's Rhodesia Is Worth Remembering 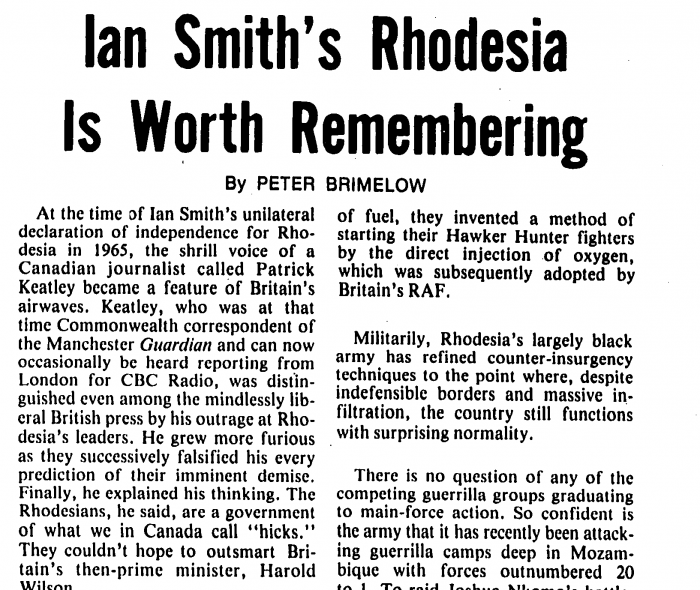 At the time of Ian Smith's unilateral declaration of independence for Rhodesia in 1965, the shrill voice of a Canadian journalist called Patrick Keatley became a feature of Britain's airwaves. Keatley, who was at that time Commonwealth correspondent of the Manchester Guardian and can now occasionally be heard reporting from London for CBC Radio, was distinguished even among the mindlessly liberal British press by his outrage at Rhodesia's leaders. He grew more furious as they successively falsified his every prediction of their imminent demise. Finally, he explained his thinking. The Rhodesians, he said, are a government of what we in Canada call "hicks." They couldn't hope to outsmart Britain's then-prime minister, Harold Wilson.

But Smith routed Wilson. For almost 14 years, Smith and the 250,000 white Rhodesians defied the world. In March, Smith's voice broke as he prorogued Rhodesia's last white-dominated House of Assembly, ending, as he said, "a great and proud era." Although a black prime minister will assume power June 1, the future looks grim for all races. The tiny white community, without which the country would contain not one road, farm, or one stone standing upon another—the much-publicized Zimbabwe ruins were built long before today's black tribes arrived—seems almost certain to pass into oblivion.[VDARE.com Note: The theory of who built the Zimbabwe ruins keeps changing--the most recent one says the builders were black, not Phoenician, or Arab but were perhaps not the ancestors of the current tribes.]

But despite war, its rule was not harsh by world standards, And Smith can be seen now to have been a responsible and reasonable farmer. Infinitely preferable to the squalid pygmies elsewhere presiding over the accelerating decline of the West.

History is written by victors. Yet Rhodesia is worth remembering. Its white population, for one thing, was discovered, in the days when psychologists dared measure such things, to have the highest mean IQ of any group on earth—the result, it was surmised, of selective emigration from Scotland, another high-scoring area.[ The Intelligence of White Rhodesians, By Nathaniel Weyl, Intelligence: The Mensa Journal No. 97, March 1967]  Whatever the reason, the country's performance since independence has been startling. Like Israel, it illustrates the overwhelming superiority currently still enjoyed by Western culture in a Third World context, the more strikingly since it faces sanctions and is not underwritten financially by the U.S. After 1965 its economy diversified rapidly to substitute for banned imports, and there was a long industrial boom. Rhodesians learned to drink local brandy instead of Scotch. Short of fuel, they invented a method of starting their Hawker Hunter fighters by the direct injection of oxygen, which was subsequently adopted by Britain's RAF. 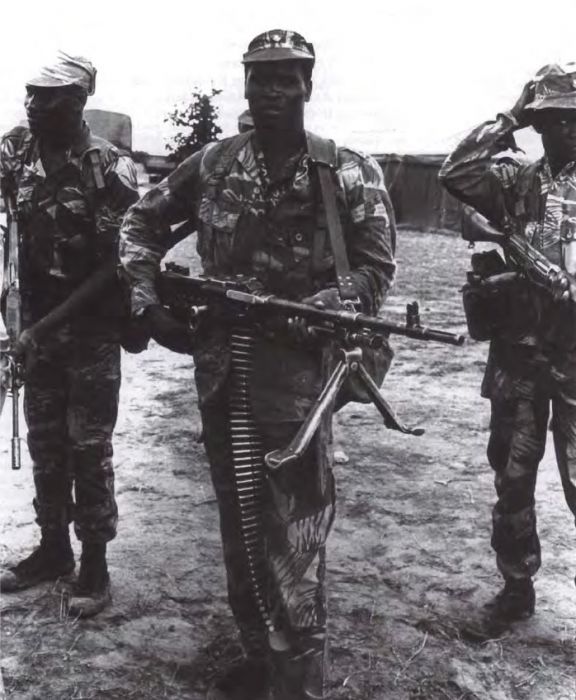 There is no question of any of the competing guerrilla groups graduating to main-force action. So confident is the army that it has recently been attacking guerrilla camps deep in Mozambique with forces outnumbered 20 to 1. To raid Joshua Nkomo's battle-shy units stationed out of helicopter range on the Zaire border, the Rhodesians simply leapfrogged from a forward base set up more than 100 miles inside Zambia. The security problem in Rhodesia is strategic, not tactical. The guerrillas, whose immediate objective is purely destructive, have the easier task.

A historian might note the irony that the years since UDI have proved the Rhodesian contention that democracy cannot survive in black Africa. Apart from the Idi Amins and Biafras, independence has brought political and economic collapse even to such allegedly moderate states as Zambia, where President Kenneth Kaunda recently won re-election by outlawing opposition. Both inside and outside Rhodesia, its black politicians are reverting to the tribal violence that predated the whites and flared up in the early 1960s. Irony extends even to the cast of characters: Edward Heath, defeated as prime minister and discredited; Harold Wilson, abruptly resigned amid gathering talk of peculation and security scandal; former Liberal party leader Jeremy Thorpe, who rose to prominence by calling for the bombing of Rhodesia's rail lines, on trial charged with conspiring to murder a catamite. And the geopolitical position with the West has grown critical with the U.S. defeat in Vietnam, breakdown of the Cold War alliances, Russia's seizure of strategic points throughout Africa and Asia, and the OPEC cartel.

But however justified Smith felt, his behavior after Mozambique fell into Marxist hands was a model of responsibility. Rhodesia's flank was now turned, and the military problem more difficult. For some time, the killing was restricted to rural Africans. Nevertheless, it distressed Smith.

Southern Africa next attracted the fatal attentions of Henry Kissinger, He began, in hopes of an election triumph, to insist on the sort of compromise of incompatibles he is now (rightly) criticizing Democrats for advocating from Vietnam to Iran. The South Africans, not realizing that U.S. hostility stemmed from domestic politics and therefore could not be appeased, began to threaten Smith with an arms cut-off. As Afrikaners, they had never liked Rhodesians much anyway.

This was Smith's moment of truth. He was urged to defy everyone and go down fighting, perhaps even invade Mozambique before the Portuguese settlers left, to create such havoc that the South Africans would be forced to intervene. But despite British propaganda, Smith was not a ruthless fanatic. His police had relentlessly tracked down the few signs of right-wing deviationism in the army (one of the first U.S. volunteers to die in battle was a member of the American Nazi party). [VDARE.com note: This refers to John Alan Coey, who Wikipedia does not say was a Nazi, it  does say that The Nation magazine reported that Coey was eulogized in an American Nazi publication. Coey’s grave in Ohio is marked with a cross, not a swastika.]

The Rhodesian Broadcasting Corp. was firmly controlled by moderates. In early 1977, Smith personally sued and bankrupted Wilfrid Brooks, the hardline editor of Rhodesian Property & Finance, a leading critic who advocated. that Smith be replaced from the right as Smith himself had replaced Winston Field years before. As the trial opened, Brooks' only son was killed in action. Smith persuaded the loyal Rhodesian electorate to accept black rule.

It was to be expected that this settlement would be rejected by the Soviets and the Third World states. Both will be satisfied with nothing less than the total destruction of the whites in Africa. The West's reasons for rejecting it—and hence in effect supporting a Marxist takeover or Rhodesia—are more complex.

Clearly, despite all the talk, it is totally indifferent to democracy or even economic prosperity in Africa, since otherwise it could hardly tolerate the black states. But the complete abrogation of its own strategic interest is more puzzling, Pandering to domestic radicals certainly plays a part. However, the rationale that black African markets or Nigerian oil money is the key is obviously absurd.

Black Africa is pitifully weak and poor, and in any case makes its own deals with the white South whenever it can. Having suppressed his opponents, Zambia's Kaunda stole their program of reopening the border with Rhodesia to rescue his disintegrating economy, Zambian cabinet ministers go to Rhodesian hospitals.

All-party opinion decreed that these were inevitable (being evicted from Aden, to be promptly replaced by Russians) and even praiseworthy (swallowing Ugandan Asians at Amin's behest), or at any rate unmentionable (losing control of law and order in Ulster although a majority were loyalists). To have the Rhodesians thriving on more serious problems might imply that British management had actually been bad, particularly with Smith not following Britain in the 1967 sterling devaluation on the grounds that Britain needed Rhodesia's financial help.

But the West's policy toward Rhodesia has been so irrational as to verge on the pathological. What can be made of countries that impose a ban on Rhodesian chrome, and then allow the Russians to buy it and resell it to them?

Or that urge of white Rhodesians to commit political suicide via majority rule, and then refuse to allow them to immigrate, even though their resistance might have ended all the faster if only they had somewhere to go?

The only answer is a profound failure of the values by which the West Judges others and itself.

Ian Smith was a fighter pilot in World War II. He was shot down and burned. At one stage, he even fought alongside Italian partisans. Yet he was described as a "fascist" by Harold Wilson—who, although a champion athlete, spent the war behind a desk in Whitehall—and his people are refused admittance to Canada on the grounds of racism by Prime Minister Pierre Trudeau, whose own concern about Nazism extended to  motorcycling around Montreal wearing a Wehrmacht helmet and agitating against the draft.

The Rhodesians may have built one of the few countries that work in Africa. But creativity no longer appeals to societies so consumed with guilt that they can hardly build pipelines across the tundra for fear of disturbing four caribou, three species of Arctic lichen and half-a-dozen professional Eskimos.

In the Rhodesians, we saw ourselves as we were and might have been. And we hated us.