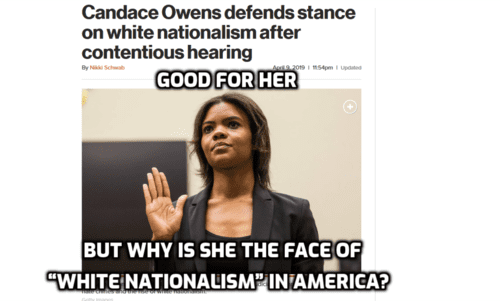 This week on Capitol Hill the Democrat-controlled House Judiciary Committee had a hearing on the threat of “white nationalism.”

I didn't read very far into the transcripts of this event before I realized the complete bogosity of it. It was a pseudo-event, like one of those family squabbles about which, in calm reflection afterwards, people say: "It wasn't really about what it was about."

What it pretended to be about was, yes, the threat to our social order from white nationalism. Eight invited witnesses—four blacks, two Jews, a Muslim, and a lady from Google who I can't pin down by any group affiliation—opined to 32 congresscritters: ten Republicans, 22 Democrats. (Some of the Democrats are pictured below, the gentleman in the lower right being named Hakeem.)

In his video report on the event (House Hearings on White Natio … er … Censorship, April 11, 2019), American Renaissance’s Jared Taylor called it  "a miserable display of ignorance and arrogance." I can't improve on that; and I urge listeners to set aside fifteen minutes of time to watch Jared's report.

The notion that our social order is under threat from white nationalism is, as I said, mere pretense. The hearings leaned heavily on statistics supplied by the Anti-Defamation League—itself, ironically, a Jewish Nationalist pressure group—purporting to show that white nationalist terrorism is real and rising.

The statistics are fake. Jared and Gregory Hood did a rigorous analysis of them, concluding that of nineteen deaths in 2017 claimed by the ADL as resulting from white nationalist terrorism, one was "clearly authentic," one was plausible, and one ambiguous. The rest were bogus.

Considering there were, according to FBI statistics, over seventeen thousand homicides that year in the U.S.A., one authenticated white nationalist killing, one plausible, and one ambiguous doesn't seem like something the republic should lose sleep over.

(That plausible one, by the way, was James Fields hitting Heather Heyer with his car at Charlottesville--an event which strikes many of us as more properly belonging in the "ambiguous" category.)

And VDARE.com’s James Fulford has pointed out that the anti-Semitic incidents the House Judiciary cited have mostly long since been exposed as Hate Hoaxes. Similarly, Steve Sailer recently published a detailed and devastating debunking of the New York Times’ “This Week In Hate” series—since quietly abandoned without explanation.

So what was this hearing really about? My guess is, the motive is linguistic. When you control a powerful ideological narrative, and are determined to keep controlling it, language is key.

I went to Google's Ngram to look up the comparative frequency in published books of the three terms "racist," "white supremacist," and "white nationalist." My inquiries weren't very successful as Ngram could only show me data up to 2008. I really want to see data for the past decade, but they don't have it.

"Racist" has been losing market share since the late 1990s, although it has stayed way ahead of the other two terms up to 2008. I bet this last eleven years it's dropped a lot more.

If you remove "racist" from the Ngram scan, "white supremacist" was way ahead of "white nationalist," around seventeen times the frequency, but starting to fall after 2003.

Every totalitarian power cult needs a vocabulary of vituperation—some way to talk about the enemies of the people: those wreckers, saboteurs, and counter-revolutionaries who are always trying to slow or divert society's righteous march forward to a radiant future.

Cultural Marxism relied on "racist" through recent decades as the principal identifier for these enemies of the people. The word has worn thin with over-use, though.

It also suffers from the drawback of not being explicitly anti-white. The word "racist" contains within itself the possibility of applying it to nonwhite people. CultMarx philosophers have come up with arguments to prove that nonwhites can't be racist. [Black people can’t be racist, by Sobantu Mzwakali, Pambazuka News, October 13, 2015] But these arguments never got much traction outside the faculty lounges, and popular mainstream or civic-nationalist commentators still score points with their audiences by tagging anti-white agitators as "racist."

So "racist" was worn out and unsatisfactory. My impression is that for most of the past ten or a dozen years, there was a push by the ideologues to replace "racist" with "white supremacist."

For reasons I don't understand, but shall take some guesses at, "white supremacist" is now slipping out of favor. "White nationalist" is the preferred replacement, and this week's congressional hearing was an effort by the ideologues to give "white nationalist" a clear stamp of (dis) approval.

My guesses as to why "white supremacist" has lost market share:

Those are my guesses. Possibly I've missed something.

I'm pretty clear, though, that in the vituperation market, now is the time for wise investors to sell "white supremacist" and buy "white nationalist."