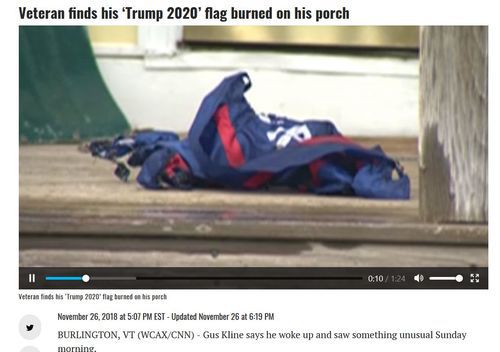 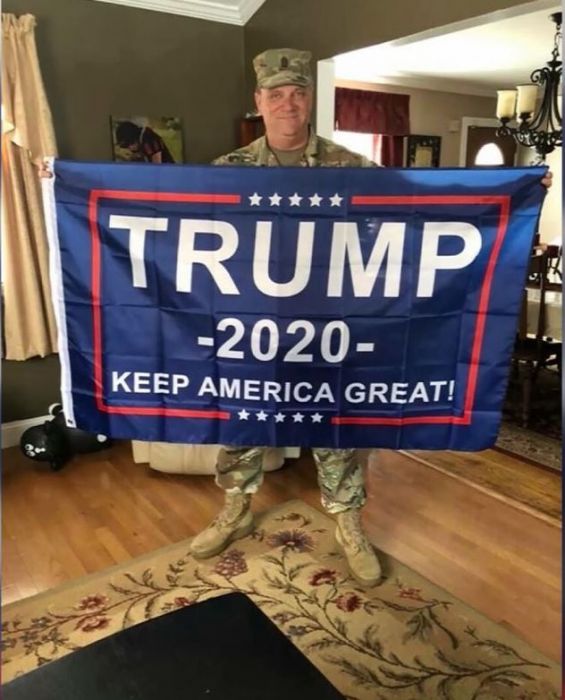 The real surprise isn't that this happened, but that a newspaper actually covered it.

After someone burned a ‘Trump 2020’ flag flying outside of his house, Gus Klein says he sees his Burlington, Vermont, neighborhood in a whole new light.

“It does make me sad,” Klein said, according to NECN. “I’m going to be 58 years old, and I’ve never seen something like this before. I’ve always lived in this area.”

The veteran of the Afghanistan War told WCAX that after waking up on Sunday morning, he went outside to find a burned piece of fabric resting on his front porch. Then, Klein says, he “noticed that the flagpole was laying on the ground” and the flag wasn’t on it.

Now, Klein says, he is left worrying about his family’s safety...

[I]n July, a group of interns for congressional Republicans called for an Uber ride to Trump International Hotel in Washington, D.C. — but the driver didn’t let them in.

Matthew Handy, an intern for Illinois Rep. Mike Bost, said it’s because he and another intern had red “Make America Great Again” hats. The 20-year-old told the Washington Examiner that he was just holding the hat in his hand and that he was not wearing it when he started to get into the car on Tuesday.

The driver asked Handy and Elijah Allison, who interns for Colorado Rep. Ken Buck, if they were holding the pro-Trump hats, Handy said. The pair confirmed that they were, Handy told the Washington Examiner, so the driver responded, “I can’t do the ride.” They then got out.

Adria Barrington, intern for Arizona Rep. David Schweikert, told Fox News that she was also with Handy and Allison when the driver kicked them out. She said that incident only pushes her to work harder for her conservative ideals.

For all the talk about how President Trump has supposedly poisoned the political climate, it is President Trump's own supporters who are most under threat. They can't hold conferences, they are attacked on the way to rallies, and journalists work hard to dox and economically punish them. In contrast, antifa groups seemingly have full freedom to operate and their lawlessness is largely ignored by the police.

What is most interesting is how conventional Republican groups are being dragged into this battle, which may force normal Republicans to actually start doing something about antifa lawlessness. Consider this report from last month in Florida, which got little attention at the time.

At least four bullets were fired from a gun into the windows of Volusia County’s Republican Party headquarters Sunday night or early Monday morning, and the party’s chairman blamed Democrats for the vandalism.

“I’m looking at the busted window that some nice Democrat did,” said Republican Party Chairman Tony Ledbetter on Monday. “Republicans don’t have any beef about what we are doing, it’s the Democrats.”

Ledbetter was slightly distracted from an interview when he spotted a hole in the glass.

“Is that a bullet hole?” Ledbetter asked volunteers, who found the broken windows and bullets around 9 a.m. Monday. “They actually used a gun, too.”

South Daytona Police Capt. Mark Cheatham said Monday his agency is investigating the shooting that left shattered glass and fallen campaign posters that littered the sidewalk outside 2841 S. Nova Road — the Nova Fountain — strip mall near Reed Canal Park. Police did not have any witnesses or suspects.

When the journalists push President Trump or Republicans to disavow this or that supporter, the GOP needs to push back and demand the media apologize for its campaign of incitement.