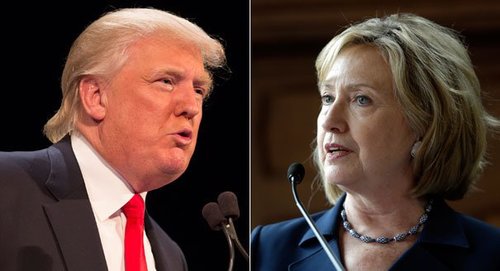 The first 2016 general election poll of September is also the first poll to show Trump beating Hillary. From May through July, Hillary was up by anywhere from 12 to 24 points over Trump. He’s now up by five points, continuing a trend in Trump’s direction in August:

The demographics in this new SurveyUSA poll are interesting, although the sample sizes are small.

They are pretty much the opposite of the conventional wisdom. Relative to traditional Republican candidates, Trump is doing very well among blacks (down only 25-59) and Asians (leading 41-39) and doing reasonably well among Hispanics (down 31-50). Among whites, however, Trump is leading Hillary only 51-34, which might be a little under what would be expected for a Republican up 5 points.

Trump is winning heavily (54-36) among those who say they pay a lot of attention to politics, and is winning 48-40 among college graduates.

Trump’s strongest region is the Midwest, where he is up 49-31.

The news that Trump, who tends to strike hip-hop fans as having the kind of style that they’d want to have if they were a rich old white guy and whose positions on immigration and trade sound more likely to help black Americans earn a living than just about anybody else’s, is on track to win, say, 30% of the black vote will likely start to panic Democratic strategists, especially if it holds up in additional polls.

Expect to see a concerted effort to demonize Trump among blacks. Obama carried the Great Lakes Rust Belt (outside of Indiana) in 2012 by running up huge margins among blacks while the Romney-Ryan ticket kept whites in the region depressed and divided. A Republican who is strong in the upper Midwest is an Electoral College nightmare for the Democrats.

One thing that’s going on is that Trump is benefiting from the Revolt of the Comedians. Awhile ago, beloved elder statesman Jerry Seinfeld spoke up against comedy-killing campus conformity, citing his friend Chris Rock as support. Some people wondered why I wrote a Taki column recently quoting at length the somewhat obscure comedian Colin Quinn. But he’s an old friend of Seinfeld, Rock, and some other well-known comedy names, and I suspect Quinn articulates in public how a lot of comedians feel in private.

Trump is not himself hugely funny (except in a meta sense, in which he’s hilarious), but he exemplifies an American value that we feel slipping away: liberty. Americans used to say, “Well, it’s a free country.” They don’t anymore. The Statue of Liberty once stood for an American’s right to say what he felt was true. Now the Statue of Liberty has been repurposed as an icon of how Americans had better shut up about immigration and diversity.

Donald J. Trump is the living embodiment of the First Amendment.

On the other hand, there are a lot of foreign policy issues on which the President really shouldn’t mouth off. For example, the official stance of the United States government since February 1972 has been that China and Taiwan are one country that should be under one government; we just won’t say which one.

Granted, that’s ridiculous, but, at least so far it has worked. And therefore the President shouldn’t say it’s ridiculous even though everybody knows it is.

A low energy guy like Obama, who more or less was raised to be some kind of Foreign Service diplomat, is probably not going to tell an interviewer that of course China and Taiwan are separate countries: everybody knows that. But a President Trump might.

In contrast, domestic policy (e.g., immigration policy) should be far more of a free for all than it is under the current rules of what’s respectable. Obama’s diplomatic Blank Screen approach where nobody is supposed to get the joke about why we elected this guy President has been a slow-moving disaster. I suspect that deep down Obama feels bad about how his Administration has, in effect, agitated blacks to murder each other, all in the name of #BlackLivesMatter. But “personnel is policy” and a lot of Obama’s appointees, such as Eric Holder, have been too dim to figure out what they are doing to America.

When it comes to domestic policy, Congress and the courts have huge says, so the President using his bully pulpit is a good thing: the embodiment of democracy.

But much of foreign policy, perhaps too much, is handed over to the President under the guise of the National Security state. So the President has less freedom to spout off his opinion about whatever comes to his attention, such as, say, the division of Cyprus into Greek and Turkish spheres. Trump the Dealmaker might just be able to spitball aloud some wacky Cyprus innovation he dreamed up that actually improves that less-than-optimal but 4-decade long stable situation. But Trump the President could also destabilize it by sounding off about how everybody on the island would be better off if only they’d work out a deal and the U.S. wants change.

Did, say, Obama blow up the Arab world (with the present dire consequences) by going to Cairo in 2009 and making an ambiguous speech? Perhaps.

Trump has a little under a year and a half to grow into the job. It’s a challenge, but not impossible. Mostly, he needs to get across that he’s not going to upset settled foreign policy just for fun.

There are two sides to Trump:

- The expert negotiator who plays his cards close to the vest

The good news is that Trump likely doesn’t care much about foreign policy, especially areas like Taiwan and Cyprus where sleeping dogs can probably be let lie a few years longer. Moreover as President, Trump would hardly be in pressing need of more publicity by stirring up unneeded foreign policy controversies beyond the ones in which he has a carefully decided upon strategy for making a deal on his terms.