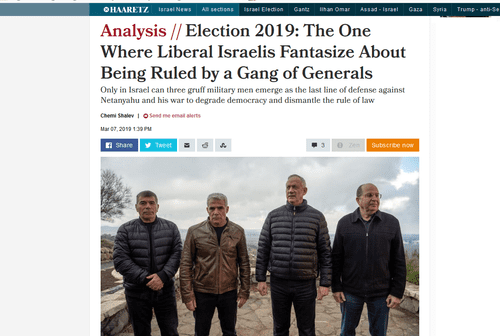 The Democratic Coalition of the Fringes is coming apart at the seams today as Speaker of the House Nancy Pelosi blinked in her confrontation with hijab-wearing freshman Rep. Ilhan Omar (D-New Puntland on the Prairie).

This Zionist vs. Islamist brouhaha exemplifies the massive fundamental problem besetting the Democrats’ coalition of folks who basically hate each other, especially as the recent Jussie Smollett and Covington fiascos have temporarily blunted the utility of ginning up hate hoaxes as the KKKrazy Glue to hold the Democrats together.

Israel is particularly fraught for American Democrats at present as the ethnonationalist Jewish state historically drifts right. Usually, Democrats don’t pay much attention to that, but with Prime Minister Bibi Netanyahu being friendly with Trump and tweeting out how walls and fences really do work for keeping out Illegal Infiltrators, Bibi is finally starting to be seen by Democrats as Trump’s John the Baptist.

On the other hand, Bibi called for an election on April 9. Even though Bibi has been at or near the top in Israel since 1996, he just might lose. In the latest poll, his Likud party is supported by 30% of voters relative to the new Blue & White alliance’s 35%. (How that translates into the horsetrading necessary to put together a majority in the Knesset, don’t ask me. Likud is usually at an advantage because Israel’s unwritten rule is that while Israel’s Arab citizens are allowed to vote, their parties can’t be used to put together a majority to form a government.)

While Likud is more closely aligned with the GOP, at least one Blue & White leader, Yair Lapid, often speaks out against Bibi alienating American Democrats.

If Blue & White were to win, I would expect virtually the entire American mainstream media to declare as one that the Nice People in Israel have won, just like they will win in America in 2020, and thus there is no longer any need for Democrats to feud over Israel. Because everything will be Nice from Now On.

Amusingly, in an age of anti-Straight White Male identity politics in America, Israel is so far right these days that its center-left Blue & White coalition is led by macho straight white men. From Haaretz:

Analysis Election 2019: The One Where Liberal Israelis Fantasize About Being Ruled by a Gang of Generals

A party led by three former generals who made their name fighting the enemy on the battlefield and exerting military control over millions of disenfranchised civilians would automatically be stereotyped, in any other context, as militarist, authoritarian and a threat to liberal values.

But this is Israel, where three gruff generals who lead a hitherto non-existent party with the appropriately patriotic name of Kahol Lavan (Hebrew for blue and white), are the dream team on which most leftists, liberals, peace supporters and human rights activists – not to mention Israeli Druze and Arabs – are pinning their hopes.

A combination of sheer desperation and the unique Israeli relationship between civilians and military has thrust former army chief of staff Benny Gantz, along with his two predecessors and sidekicks, Moshe Ya'alon and Gabi Ashkenazi, into the front lines of Israeli history. They constitute the best and possibly last chance to save Israel from Benjamin Netanyahu’s final assault on Israel’s democracy, rule of law and whatever remains of its liberal values.

Granted, the three have hardly uttered a word that should endear them to Israeli peaceniks and those who, in countries such as the U.S., would be called “liberal”. Nonetheless, even Labor Party and Meretz loyalists who bemoan the fact that Israeli moderates have anointed a military junta to rule over them will be praying for Gantz and Co. on April 9. Beggars who have lost to Netanyahu three times straight – and who haven’t notched up a decisive victory in 20 years – can’t exactly be choosers.

The joint enlistment of the military trio, amplified by their dramatic last minute union with former Finance Minister Yair Lapid, had already upended Israeli politics before the attorney general issued his decision late last week to indict Netanyahu on three charges of corruption. In less than a month, the prospects of Netanyahu losing the elections have gone from unthinkable to improbable to plausible.

And it is only because of Netanyahu’s proven record as comeback kid, the certain knowledge that he is desperate and will stop at nothing to remain in power – as well as the fact that he’s been around so long that young Israelis can’t imagine life without him – that no one would dare venture that his imminent defeat and departure might even be probable.

If Netanyahu resorted to the infamous, odious and more than vaguely racist “Arabs coming in hordes” ploy on Election Day 2015, one shudders to think what he is capable of when his own neck is on the legal line.

The stakes couldn’t be higher. If the generals lose and Netanyahu wins, liberal Israel will be defeated. Netanyahu will be given a free hand to legislate his way out of prosecution and all he has to do in exchange is sell Israel’s soul to religious and nationalist fanatics, who will change it forever.

Have you ever noticed that movie trailer voiceovers used to all start out “In a world where …”, but now they all end “… and change the world forever”? What’s the deal with that anyway?