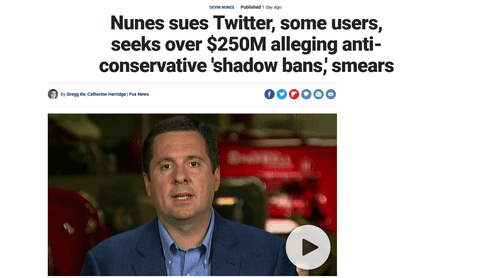 A prominent Republican has decided to take on Twitter in court, but it’s not cause for celebration for immigration patriots.

Sadly, this lawsuit is really a silly attempt to get Twitter to censor criticism of powerful politicians. Nunes’s main bone with Twitter is that it let accounts to defame him—a famous politician. If true, then Nunes’s can and should sue the accounts in question. But Twitter is protected by Section 230 of the Communications Decency Act from publisher liabilities. Since Twitter and other major tech platforms aspire to offer a “forum[s] for true diversity of political discourse,” they are not treated like publishers by the law.

It’s clear that Twitter and others have violated the spirit of Section 230, but Nunes’s lawsuit does nothing to correct that. On the contrary, it demands Twitter to censor more “hateful” content and appease the powerful. Nunes’s action does nothing for those banned or suspended by Twitter. It’s all about his own petty complaints against two parody accounts.

If this lawsuit succeeds, it would mean far more censorship on Twitter. Thankfully, it appears to be so frivolous that it won’t advance far in court.

There’s the current Republican obsession with censoring the Boycott, Divestments, and Sanctions [BDS] movement against Israel, a sign they lack concern for controversial speech. One of the first bills passed in the new Congress was legislation that allowed states to punish companies that accede to the demands of the BDS movement. Obvious free speech concerns exist with the bill, yet only one Republican senator (Rand Paul) voted against it [U.S. Senate Passes anti-BDS Legislation With Strong Majority, by Amir Tibon, Haaretz, February 6, 2019].

One can easily imagine a Republican-crafted tech bill that demands these companies do more to suppress criticism of Israel. Republicans are that stupid and unreliable.

The Watcher’s article Sunday noted there are prominent Republicans who want to positive changes to Big Tech and how it handles free speech. These positive proposals include legislation that would revise Section 230 to specifically protect viewpoint diversity on major tech platforms. That’s why someone like Sen. Josh Hawley should take the lead on this fight--not Devin Nunes.