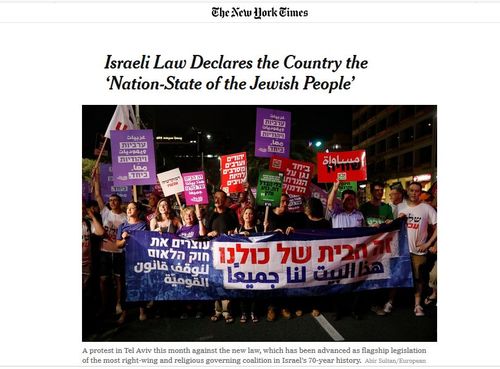 Breaking News: The Jewish State Declares Itself the Jewish Nation-State

JERUSALEM — Prime Minister Benjamin Netanyahu of Israel has long demanded that the Palestinians acknowledge his country’s existence as the “nation-state of the Jewish people.” On Thursday, his governing coalition stopped waiting around and pushed through a law that made it a fact.

In an incendiary move hailed as historic by Mr. Netanyahu’s right-wing coalition but denounced by centrists and leftists as racist and anti-democratic, Israel’s Parliament enacted a law that enshrines the right of national self-determination as “unique to the Jewish people” — not all citizens.

The legislation, a “basic law” — giving it the weight of a constitutional amendment — omits any mention of democracy or the principle of equality, in what critics called a betrayal of Israel’s 1948 Declaration of Independence, which ensured “complete equality of social and political rights” for “all its inhabitants” no matter their religion, race or sex.

The new law promotes the development of Jewish communities, possibly aiding those who would seek to advance discriminatory land-allocation policies. And it downgrades Arabic from an official language to one with a “special status.”…

Its passage demonstrated the ascendancy of ultranationalists in Israel’s government, who have been emboldened by the gains of similarly nationalist and populist movements in Europe and elsewhere, as Mr. Netanyahu has increasingly embraced illiberal democracies like that of Hungary — whose far-right prime minister, Viktor Orban, arrived in Jerusalem for a friendly visit only hours before the vote.

So obscure Israel is merely following the lead of mighty Hungary? As a recent newcomer to the world stage, Netanyahu is of course looking for clues as to how to behave from the veteran Orban?

Or could it possibly be that the success of Israeli nationalism has made Israel the vanguard style-setting country of the last 70 years and much of the rest of the world is now looking to the example long set by The Jewish State?