On Tuesday, April 9, the Democrat-run House of Representatives, itself populated by non-white ethno-nationalists of various stripes, will run hearings on “white nationalism” and “what social media companies can do to stop white nationalist propaganda and hate speech online” .  [Candace Owens to testify in congressional hearing on hate crimes and white nationalism, by Tal Axelrod, The Hill, April 5, 2019] The sole right-of-center voice: Candace Owens of Turning Point USA, a black conservative who got her start trying to dox right wingers.  [The Problem with Candace Owens, by Cathy Young, Quillette, May 8, 2018] Presumably, Owens is going to accuse the Democrats of being “the real racists.” The Democrats’ obvious intent: to crack down even further on free speech online, with New Zealand presumably the model. It’s a trend.

For example, recently at a Starbucks in Palo Alto CA, an elderly Jewish man wore the red cap bearing the slogan of the President of the United States. Simply because of this, one Parker Mankey, co-chair of the Bayshore Progressive Democrats, began screaming and swearing at him, calling him a “hater of brown people” and a “Nazi.”

Indeed, she did more than that. On Twitter, she bragged:

I am going to publicly shame him in town and try to get him fired and kicked out of every club he is in. I am going to go to his house march up and down carrying a sign that says he hates black people. I am going to organize protests where he works to make him feel as unsafe as he made every brown person he met today.

Surprisingly, this campaign didn’t work for her. It was Mankey who ended up losing her job, though I doubt she’ll be unemployed for long.  [California woman fired after confronting man wearing MAGA hat at Starbucks, by N’dea Yancey-Bragg, USA Today, April 4, 2019] There are no well-funded right-wing groups that will obsessively follow her career, calling employers and making sure she can never hold a job again.

The incident is revealing because it shows what many white Leftists currently believe:

Polling actually shows dramatic shift of white “liberals” to the left on racial and immigration issues—a shift which preceded President Trump and is not just the result of conservative whites leaving the Democratic party. Sean McElwee was able to show that white Democrats who remained in the party actually changed their minds on social justice issues with a sharp rise in those who believed blacks are held back by “institutional racism” rather than a supposed lack of individual initiative [The Rising Racial Liberalism of Democratic Voters, by Sean McElwee, New York Times, May 23, 2018] This White Democrats are now actually to the left of black Democrats on the question of special help for non-whites. 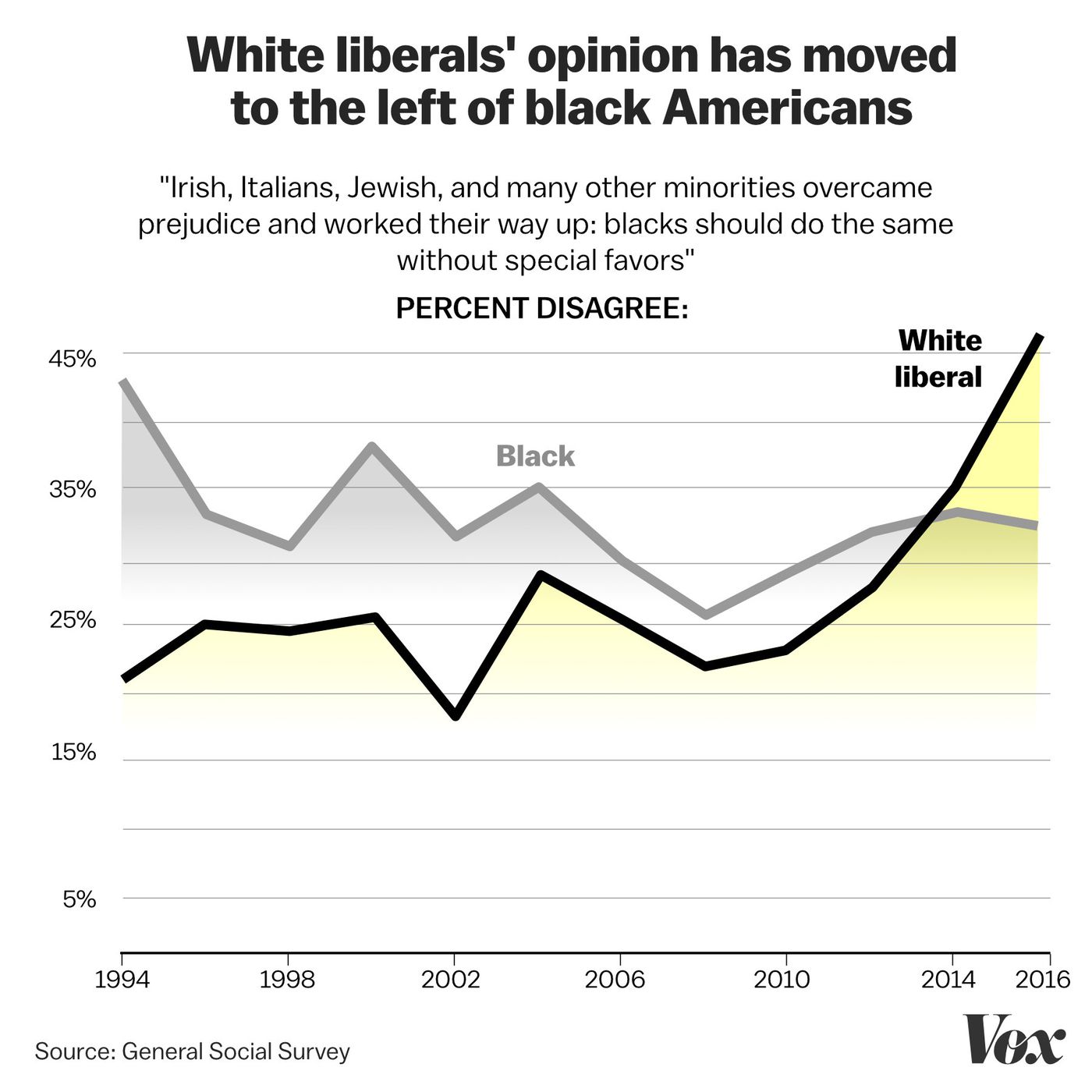 Vox ideologue Matthew Yglesias (who is so spiritually pure that, quite unprovoked, he blocks VDARE.com on Twitter) calls this The Great Awokening, [April 1, 2019] and credits it to the rise of social media

Maybe but another factor must be the increasing radicalization of the Main Stream Media. Bias is one thing; the liberal bias of the MSM has been known since Richard Nixon. But in recent years, American journalism has been defined by two major trends.

The first trend, toward pathologizing whites, can be seen in the increasingly bizarre articles endlessly appearing in publications from Vice to Buzzfeed randomly attacking white people for existing. Steve Sailer chronicles a new one of these almost every day, including:

The second trend, hunting down dissidents, has become critical—even flyers posted by rather milquetoast groups lead to screaming headlines in both local and national media. Sensational reports published by groups like the Southern Poverty Law Center and the Anti-Defamation League are credulously repeated by most media outlets.

Significantly, in a recent article urging a federal investigation of the SPLC’s finances—something VDARE.com’s Patrick Cleburne anticipated eight years ago—Jim Tharpe, formerly of the Montgomery Advertiser, acknowledged that even as his paper began a celebrated investigation of the SPLC two decades ago “like other media outlets, we generally parroted SPLC press releases”. [Something strange is going on at this civil rights institution. It must be investigated. Washington Post, April 5, 2019] The press already took for granted the premise of the SPLC that evil “white nationalist” haters are proliferating throughout the country.

Even if the SPLC is totally destroyed by some forthcoming legal-financial scandal, it won’t make much of a difference. The MSM as a whole itself now fulfills the mission the SPLC once did. Indeed, “mainstream” journalists are even more extreme than the SPLC itself, gleefully running public relations campaigns for Antifa vigilantes and covering up their crimes.

Conservatives may comfort themselves by saying that most people tune out these kinds of sensational reports. Yet as the case of Parker Mankey shows, many, many people in this country have been whipped into a borderline-violent frenzy by sensational media reporting about a supposedly dangerous “Alt Right threat.”

Accusations that President Trump, or, as Congresswoman Ilhan Omar recently charged, Stephen Miller are “white nationalists” are radicalizing ordinary Democrats into believing that their country is being governed either by a fascist conspiracy, foreign powers, or both. [Omar: ‘Stephen Miller is a white nationalist, by Michael Burke, The Hill, April 8, 2019]

What’s more, Democrats really do believe what the MSM is telling them. While Republican trust in the press has declined, a 2018 Gallup study found 76 percent of Democrats trust the mass media, the highest favorable rating in two decades. Unlike the “Great Awokening,” this sharp increase in faith in media correlates directly with the election of President Trump. [U.S. Media Trust Continues to Recover From 2016 Low, by Jeffrey Jones, Gallup, October 12, 2018]

Which is leading journos to become drunk with power, openly leading campaigns to deplatform people they don’t like and even get them banned from various services. The latest target: Faith Goldy, who was banned from Airbnb at the urging of journalists. [Faith Goldy Banned From Airbnb, But Facebook Still Permits Her Controversial Videos, by Jordyn Posluns, Narcity, April 5, 2019] These journalists complained that she was still allowed on Facebook, so Facebook dutifully banned her as well. [Facebook bans Faith Godly and “dangerous” alt-right groups, by Kathleen Harris, CBC, April 8, 2019]

Left-wing tech employees feel entitled to act the same way. Leaked documents show that Google employees threw a tantrum that the black female head of the Heritage Foundation, Kay Coles James, had been invited onto an advisory board about Artificial Intelligence. [Exclusive: Leaked Messages Show Google Employees Freaking Out Over Heritage Foundation Link, by Allum Bokhari, Breitbart, April 4, 2019] The organization was disbanded as a result of employee protests. [Member of Google’s canceled AI Board Furious At Company’s Cave, by Lucas Nolan, Breitbart, April 5, 2019]

Needless to say, Heritage brought this humiliation on itself, by its cowardly and disgraceful treatment of the wholly innocent young scholar Jason Richwine when he was the object of an earlier witch hunt, and by the classic cuckservative move of hiring James in the first place [Breaking Two Glass Ceilings, by Cal Thomas, Washington Times, December 25, 2017] which of course did it no good at all.

“Woke rule” may soon be backed by state power. That’s what the House Democrats’ hearings on “white nationalism” portend. What is amazing is that these hearings are proceeding without protest, although Leftist radicalization has already led to violence against Congress itself. House Minority Whip Steve Scalise was shot by a man gaslit into thinking President Trump was a “traitor.”  Yet there were no calls to deplatform those who created this environment. Republicans are apparently less afraid of being shot than being called racist by journalists.

The Leftist echo chamber online is also intensifying because of the deplatforming of Trump supporters and right-wingers from Twitter and Facebook. Conservatism Inc. has been mostly silent about this censorship, clinging to the argument that social networking companies are simply “private enterprises” that can exclude anyone they don’t. Naturally, Conservatives and libertarians do not take such a fundamentalist view about property rights when it comes to the Civil Rights Act.

Conservatism Inc. had better wake up. Leftists are only going to get more radical and if the Dissident Right is entirely deplatformed, they will simply find new enemies to destroy, as the campaign against the Heritage Foundation shows.

As America descends into the Third World, the Communist-style search for “wreckers” and heretics responsible for multiculturalism’s failures will only intensify. Under the soft tyranny of Political Correctness, America is already in some ways less free than the Eastern Bloc of the 1970s and ‘80s. [The Liberalism That Isn’t, by Costin Alamariu, Daily Caller, September 7, 2017] Without a change, and in default of an American Right willing to fight back, a descent into overt Soviet style repression doesn’t seem far away.