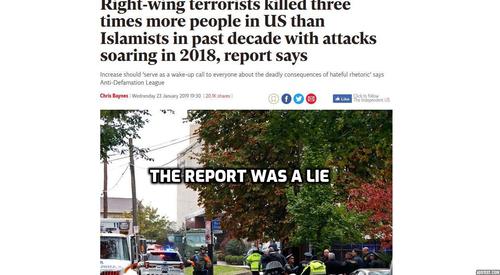 Most media take reports from The Anti-Defamation League seriously, and the group’s claims that white nationalist terror is on the rise get major coverage.

The ADL promotes censorship, claiming its data are a “wake-up call to everyone about the deadly consequences of hateful rhetoric.”

In fact, these reports are so deceptive it is hard to believe they are not deliberately written to deceive. They make no distinction between what they call “terrorism” and what appear to be “hate crimes.” Far worse, they include any killing by anyone the ADL can plausibly call a “white supremacist” or “right winger” whatever the motive. This means that a Kluxer who kills his wife is a “right-wing terrorist.” Likewise, a number of “right-wing” killers have been black.

The ADL’s reports for the last three years are worthless.

For 2016, the ADL reported 69 deaths due to extremists, but admitted that 62 of them had nothing to do with white extremism. Pulse Nightclub shooter Omar Mateen accounted for no fewer than 49 deaths, and black nationalists murdered eight police officers: Micah Johnson killed five officers and Gavin Long killed three.

Another “extremist” whom even the ADL did not call a “white nationalist” was Erick David Shute, a “sovereign citizen” who killed three men. Mr. Shute said he didn’t understand what was happening in court and claimed he was in contact with the “entire celestial spiritual realm.”

So what about the seven people supposedly killed by “white supremacists”? Brent Luyster, who killed three people, can be credibly called a supremacist. He had SS lightning bolts tattooed above his right ear, and he shaved his head during jury deliberations to make sure jurors saw it. However, he killed friends and associates because of personal disputes, and even the ADL admitted that the “murder[s] may not have been ideological in nature.”

That leaves four killings. Members of the violent gang Aryan Circle killed a fellow gang member. The ADL concedes that “white supremacists” are likely to “engage in a large amount of gang-related and traditional criminal activity.” That was the case here.

Russell Courtier, a man with a violent history who joined the European Kindred gang in prison, was convicted of the hit-and-run murder of black teenager Larnell Bruce Jr. The defense claimed the men were in a fight before Mr. Carter ran down the black, and that the fight was not about politics. The motive therefore may not have been racial. Still, in a split decision, the jury convicted Mr. Carter of a hate crime, so this can justifiably be called a “white supremacist murder” for 2016.

There are two more murders the ADL credits to “white supremacists,” but it doesn’t even describe the crimes or the perpetrators. Given its tendentious classification of the other crimes, there is no reason to think these were race-based “hate crimes” or “terrorism” either. That means, of the 69 “extremist” killings the ADL reported for 2016, only one can legitimately be attributed to racial motives.

The 2017 report has a complete list of 34 extremist murders, and the ADL blames “white supremacists” for 18 deaths and the “Alt Lite” for one more. Only one is clearly authentic, and one more is plausible, as follows:

There was one ambiguous case:

The remaining cases—11 out of 14—did not have a racial or ideological motive.

Of these 19 murders in 14 cases, only two are clearly—or at least judicially found to be—cases of “white supremacist” terrorism.

The 2018 report is just as bad. It warns of the dire “white supremacist” threat and claims that of the 50 people killed by domestic extremists, 49 killings were “right wing.” The single exception was Corey Johnson, who allegedly murdered someone at a sleepover after becoming obsessed with violent jihadist videos and converting to Islam. Still, the ADL says that before his conversion, Mr. Johnson had a “right-wing” affiliation, which encourages readers to think he, too, was another crazy white racist.

Of the 49 “right-wing” deaths, the ADL blames 39 on “white supremacists.” However, only three cases appear to be clearly motivated by race or “hate:”

Two cases may have been racially motivated.

The remaining five cases had no racial motive.

Of these 39 deaths the ADL blames on “white supremacy,” only the 11 killings at the Tree of Life Synagogue can be legitimately called “terrorism,” in the sense that they had a clearly political motive. Two more killings had a clearly racial motive, and two possibly had at least a partially racial motive, so no more than 15 of the 39 killings can be plausibly be called “hate crimes.” And eleven people were killed by a single man: Robert Bowers.

What of the 10 remaining killings the ADL blames on the “right wing”? Two were by an “incel,” three were killed by black “Moorish Sovereign Citizens,” and five were random murders by unbalanced white people.

It is ridiculous to call any of these 10 murders “right-wing.”

Of course, when the media wrote about the 2018 report, they didn’t distinguish between “right-wing” and “white supremacist,” implying that every killing was similar to the attack on the Tree of Life Synagogue: a planned, racially or politically motivated killing by a venomous white man.

Typically enough, NJToday.net reported that “Right-wing terrorists killed 50 people in 2018,” adding that “right wing extremism is on the rise, in part fueled by President Donald Trump.” Business Insider said that “all of the extremist killings in the US in 2018 had links to right-wing extremism, according to new report.” Haaretz’s headline: “Right-wing Extremists Murdered 50 Americans in 2018, Report Finds — and One-third of Them Were Jews.”

The ADL’s methods are absurd. It might as well have reported every killing by every black or Hispanic gang member who ever said anything insulting on social media about white people.

The reports are fraudulent. The 2016 version does not even describe all the murders it claims were “right wing”; we are supposed to take their word for it. For 2017 and 2018, however, the ADL at least listed every killing. A cursory reading is all it takes to see that the reports are bunk, but the ADL probably knew it could count on friendly media to help perpetuate the fraud. This is nothing more than collusion for the purpose of justifying even more censorship of racial dissidents.

Gregory Hood [Email him] is a staff writer for American Renaissance. You can follow him on Gab and Telegram. Jared Taylor [Email him] is editor of American Renaissance  and the author of Paved With Good Intentions: The Failure of Race Relations in Contemporary America. (For Peter Brimelow’s review, click here.) You can follow him on Parler and Gab.