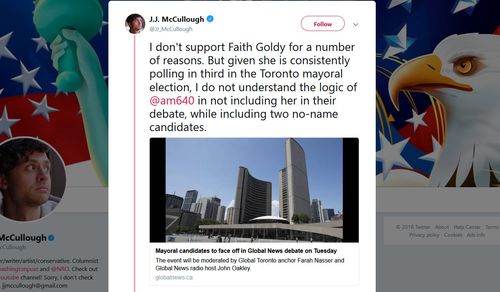 You Gotta Have Faith: Why Isn't Faith Goldy In Upcoming Toronto Mayoral Debates?

Faith Goldy is running to be mayor of Toronto and as we've written before, she shouldn't be underestimated. Needless to say, she's running against the entire System media, which is doing its best to hurt her and intimidate her supporters. [Toronto police should discipline officers who posed with Faith Goldy, by Davide Mastracci, Huffington Post, August 30, 2018].

Yet by any indication, Goldy's campaign is gaining steam. A new poll suggests that she is in third place among all candidates.

The poll also asked which mayoral candidate they were planning to vote for. Among decided voters, incumbent John Tory leads with 61.8%, while Keesmaat has 25.6%. Faith Goldy has 6% support while 6.4% of Torontonians said they would support another candidate.

[Torontonians strongly opposed to Ford's use of notwithstanding clause, Mainstreet Research, September 18, 2018]

Somehow, even though she is the third place candidate, Goldy is being excluded from upcoming debates, while candidates with less support are being included. This is obviously an attempt to "deplatform" her by System media. While Goldy is excluded, Sarah Climenhaga and Saron Gebresellassi, both left wing fringe candidates, are being included despite having negligible poll numbers.

I don't support Faith Goldy for a number of reasons. But given she is consistently polling in third in the Toronto mayoral election, I do not understand the logic of @am640 in not including her in their debate, while including two no-name candidates. https://t.co/uHqK1zykTl

Of course, thus far, Goldy has not been receiving help from the System media or recognition except for hit pieces. So even this deplatforming may not stop the growth in her support. If nothing else, it shows that she is the one alternative to business as usual politics.