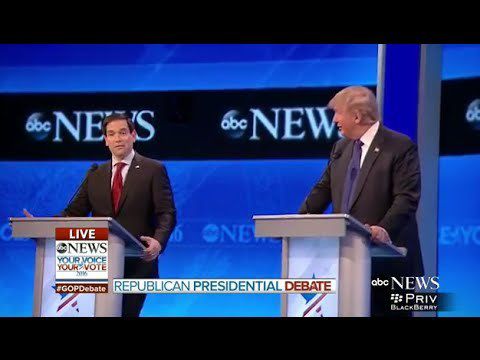 Hmmm...Trump Agrees With Brimelow On "Conservatism"

I wrote a while ago that I've had a soft spot for Donald Trump ever since a trivial but telling social interaction with him at a conservative affinity group banquet in New York some thirty years ago. Now, at the GOP candidates debate last night, he's done it again.

ABC's John Muir asked three candidates, in slightly varying forms, about "what it means to be a conservative."

John Kasich: [Blah blah tax cuts–balanced budgets—jobs—"but once we have economic growth I believe we have to reach out to people who live in the shadows." By this Kasich apparently means, not illegal aliens, although he favors Amnesty, but "the mentally ill, the drug addicted, the working poor...our friends in the minority community."]

...it's about three things. The first is conservatism is about limited government, especially at the federal leval...It's about free enterprise...And it's about a strong national defense. It's about believing, unlike Barack Obama, that the world is a safer and a better place when America is the strongest military and the strongest nation on this planet. That's conservatism.

Kasich and Rubio's answers, of course, are not remotely "conservative" but utilitarian, economistic, classical liberal. Note that Rubio even felt obliged to justify "strong national defense" in universalistic, Wilsonian terms: it will make the world "a safer and a better place."

Which reminds me of me, in an essay I wrote for Why I Am A Reagan Conservative, a 2005 collection of essays edited by Reaganite Michael Deaver (I thought I was just a conservative, but they changed the title):

The core of conservativism, it seems to me, is this recognition and acceptance of the elemental emotions. Conservatism understands that it is futile to debate the feelings of the mother for her child—or such human instincts as the bonds of tribe, nation, even race. Of course, all are painfully vulnerable to deconstruction by rationalistic intellectuals—but not, ultimately, to destruction. These commitments are Jungian rather than Freudian, not irrational but arational—beyond the reach of reason.

...capitalism, the free market, and even liberty...are natural outgrowths of conservatism. But they are outgrowths—epiphenomena of the post-Enlightenment modern age. Conservativism itself is pre-modern.

In a patronizing piece Conservatism is Still A Second Language to Donald Trump [Opportunity Lives, January 7 2016], somebody called John Hart dismisses Trump's answer as "Merriam-Websterish" and informs us

Trump’s answer may have been how conservatives described themselves once: in 1957.But today’s modern conservative movement isn’t a hoarding or protectionist philosophy. Conservatism isn’t about conserving; it’s about growth.