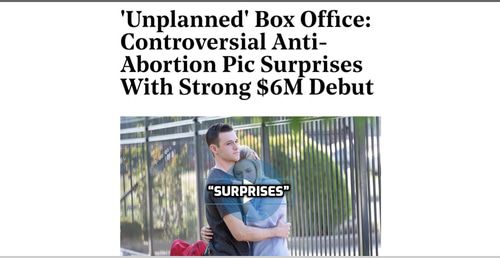 The pro-life movie Unplanned opened this past weekend and was a surprise box-office success mostly due to its strong support among pro-lifers:

The R-rated film — landing in fifth place — scored the second-biggest start ever for faith-based distributor Pure Flix behind God's Not Dead 2 ($7.6 million). The Christian pic did its biggest business in the Midwest and South...

"We are thrilled, gratified and humbled," co-directors Cary Solomon and Chuck Konzelman said Sunday in a statement. "We are so pleased that the American people have responded with such an enormous outpouring of support at the box office. It humbles us and we look forward to seeing what happens in the weeks ahead."

On Monday, Vice President Mike Pence gave the movie a thumbs-up of his own, tweeting, "So good to see movie theaters across the country showing @UnplannedMovie -- a deeply inspiring new pro-life film based on the best-selling book by @AbbyJohnson. More & more Americans are embracing the sanctity of life because of powerful stories like this one. #Unplanned"

The film is based on the true-life story of Abby Johnson, a former clinic director at Planned Parenthood who converted to being pro-life. It chronicles the path to her change of heart, with most of the story detailing her life prior to becoming an advocate for the unborn.

The film reminded me of the ridiculous contradiction between the way pro-lifers talk and the way they act. The movie contained some dialogue between a Planned Parenthood worker and a pro-lifer. The pro-lifer made the oft-repeated claim that abortion is an evil as great as racism. You frequently hear this from pro-lifers. But I question whether they actually believe it--because pro-lifers treat people who support abortion much better than they do people who they consider to be "racist."

Just look at the recent CPAC. Nick Fuentes and Faith Goldy were denied press passes, and in Fuentes' case from even attending at all, but an ardent supporter of abortion like Van Jones was welcomed as a featured speaker. If pro-lifers truly believed that abortion and racism were equal evils, then why is there such a double standard? Why are they banning people who are simply accused of being racist but deny it and, at the very same time, warmly embracing people who are unapologetic supporters of abortion?

Abby Johnson was a committed promoter of abortion for almost a decade. By her own admission, she was responsible for 22,000 abortions. And her supposedly pro-life parents and husband just passively sat on the sidelines. The film shows a few scenes where they express disapproval, but it never escalates beyond mild conversations. Contrast that muted response from pro-lifers with this reaction of a father who disavowed his son for hosting a comedic podcast where slurs are used.

How many times have you heard a pro-lifer say "I have a lot of pro-choice friends" or "I respect your pro-choice opinion?" If someone honestly believes abortion is the unjustified killing of an unborn child, then why "respect" the opinions of anyone who support such an indefensible evil?

You never hear someone who considers themselves "antiracist" say "I have a lot of racist friends" or "even though I disagree with you, I respect your right to be racist."

Regardless of how you feel about abortion, this type of behavior by pro-lifers confirms that they either don't believe their own rhetoric, or are simply just cowards. My bet: it's a combination of both.